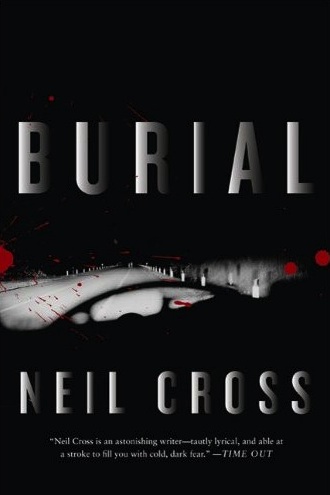 If you only read American crime fiction you might not be familiar with Neil Cross, but, trust me, he’s a big deal in the U.K.  A successful television writer and the author of a growing number of tight, psychological crime dramas, Neil is currently enjoying the excitement of seeing his latest novel find publication in the U.S.

BURIAL, a compelling, psychological story of one man’s descent into the darkness of his own conscience, was published by Forge Books in March of 2010.  It has been called ‘Terrifyingly scary . . . brilliantly written in taut, humorous prose, while being exceptionally well observed and paced’ by the Daily Mirror, and, ‘His scariest and most satisfying yet . . . What it doesn’t tell you about the perverting, abasing power of guilt isn’t worth knowing’ by Time Out.

Neil was lead scriptwriter for series six and seven of the acclaimed BBC spy drama series Spooks and is the creator of the forthcoming BBC crime thriller Luther, which is scheduled to appear on BBC1 in 2010, starring Idris Elba.  I’m very happy to host Neil here today.

Stephen:  Neil, I have to apologize for not having read your work until recently, when my editor handed me an advanced copy of BURIAL and said, “You HAVE to read this author!”  I read the book and I truly could not put it down, nor did I want to.  What makes BURIAL different from the rest of your work, and do you think these differences built the bridge that enabled this book to “cross the Pond?”

Neil:  Well, thanks for the generous words. To be honest, in some ways Burial is typical of what I write.  Perhaps the cardinal difference between it and my earlier novels is actually how I’m perceived as a writer.

For quite a while I was marketed as, and therefore considered to be, a“literary” novelist. But I never accepted any distinction between “literary” fiction and “genre” novels, just between good books and bad books.  I wanted to ensure that readers knew me for what I am, which is a suspense novelist. I’m proud of that.

All that aside, with Burial I felt that I’d learned to tell the story I wanted to tell in the best, most suspenseful way I could.

People keep telling me it kept them awake at night, which is immensely gratifying. I love to think that I can frighten a reader, move them, excite them….make them think: Just one more chapter before I go to sleep.  I can’t think of a higher calling than that.

Stephen:  The plot of BURIAL is launched from one simple mistake, an assumption on the part of the protagonist, Nathan, that he shares the guilt of murdering a young woman with a man he barely knows.  I won’t spoil the incident for our readers, but I can certainly see how Nathan has been led to believe that he is equally responsible for the death.  The story then becomes a psychological examination of Nathan’s sense of guilt, and all of his actions going forward, for many years, are predicated on this terrible secret he keeps.  What drew you to this material?

Neil:  In general, I’m fascinated by how easily we make the transition from one moral realm to another; by how effortlessly an ordinary human being, almost any human being, can behave like a monster. It really doesn’t take much. Ask Stanley Milgram.

But what really horrifies and fascinates me isn’t so much that wickedness happens…it’s what comes after. It’s that you somehow have to live with yourself.  Everyone knows how it feels to lament their own behaviour — things they did or said in the heat of the moment, perhaps after one drink too many; things they now bitterly regret.

So how must it feel, to wake up and remember not that you insulted your best friend or were unfaithful to your spouse…but that you did something truly horrifying, something that could never be justified or forgiven?

Simply by committing such an act, you became another kind of being. But you still have to get up and shower and go to work. You still have to lead a life, one in which you hope nobody ever knows, or ever finds out what you did: not because you fear for your freedom, but because you couldn’t endure the shame of the people you love knowing what you’ve become.

This happens to real people, every day. It’s happening to somebody in your town right now, maybe the person behind you at the lights this morning. I wanted to write a book about it, and that’s the place Burial came from.

Stephen:  Bob, Nathan’s “partner in crime,” is an eerie individual.  What was the inception for this character?  Have you ever met anyone who so fanatically studies the paranormal?

I’ve spent a lifetime studying the subject, and I can happily recount the most rigorous and plausible scientific, psychological and cultural interpretations for most apparently supernatural phenomena. But that doesn’t stop me being scared of the dark.

So although I don’t write autobiographical fiction, there’s definitely a fragment of me in Bob.  And Nathan’s guilt-ridden, obsessive fear of the dark is entirely mine — an autobiographical  sketch from my own life as it was, twelve or fifteen years ago, when I lived alone in a fifth floor apartment in a London tower block.

Stephen:  Despite all the unnerving things that Nathan does—his uncomfortable stalking and wooing of Holly, the dead girl’s sister, and the duplicity he exhibits at his workplace—I still end up liking him and wanting him to succeed.  I want him to be happy.  Why do you think that is?

Neil:  I’m fascinated by how certain novelists beguile the reader into becoming a kind of accomplice — a shudder of confederacy I experienced first and most utterly when I read Patricia Highsmith’s The Talented Mr Ripley.  In that remarkable novel, the author makes no attempt whatever to excuse Ripley’s homicidal behaviour…but we still want him to get away with it.

Stephen:  There’s a real tempo to BURIAL, and I don’t think it’s all represented in the plot.  I think you’ve created a dilemma that drives the psychology of the story beyond the confines of a simple three-act structure.  The stakes are much greater than whether Nathan goes to prison or not.  Because of the trusting relationship he’s built with Holly, we sense that the consequences of his failure would absolutely crush her, and this would be worse for Nathan than if he were incarcerated.  So, your psychological dilemma and your plot crisis intersect in the climax.  First of all, could you comment about the way you approached handling the psychological versus plot elements of the book, and secondly, do you outline and plot your books carefully, or do you just sit down with a concept and write until you’re done?

Neil:  I think psychology and plot are the same thing. Nathan is who he is and he did what he did. The way those two things intersect is the story called Burial which, in the end, is all about love.

At the outset of writing a story, I’ve got a moderately good idea of where it’s going, or at least where I want it to end up. But in order to keep me excited the route I take has to be flexible.  If I outline too much, things start to feel kind of fixed…and once a story feels fixed, it’s a short hop to stagnation. So usually I scribble down a few notes — a rough beginning, a rougher middle, a downright crude end.  Then I just dive in and get on with it. If there’s research to be done, I do it on the fly, often trusting it to coincidence. ( I always seem to stumble on the right article or hear the right news report at exactly the right time.)

I’ve settled on this working method — if you can even call it that — by way of a lifetime’s trial and error. Unquestionably, it’s not for everyone: I get lost, I get stuck, I get sleepless nights. I stare at my laptop with a baleful eye.

But somewhere, right at the back of my head, part of me seems to know where I’m headed, if not quite how to get there.

Stephen:  Do you think your experience writing television has in any way influenced your style and technique?

Neil:  Writing  screenplays is a much more methodical and structured affair; but not quite as structured and methodical as some of those “how to” books would have you believe.

Each discipline informs the other — for instance, learning to write for the screen taught me a lot about the frugality of structure. But writing novels taught me a great deal about the practicalities of characterization…which is equally significant.

Actually, in the end it seems to me that character, action and structure are essentially the same thing.

Stephen:  When did you leave the UK, and how did you end up in New Zealand?

Having at the time been pretty much nowhere, this notion dazzled me. I grew up thinking: that must be the best part about being a writer…you get to live anywhere you want to.

Although my wife and I met, married and had kids in London, she’s a New Zealander. She and I visited New Zealand several times together, but I only needed to be here about ten minutes before I fell in love with it.

At the same time, I’d grown wholeheartedly sick of London. By then I was a full-time writer. Remembering that childish fascination with the nomadic Mr  Harrison, I thought: I’m a writer. The best part about that is, I get to live anywhere I want to.

So we upped sticks and emigrated.

We’ve been here for seven years now. I continue to set my books and TV dramas in England, and work takes me home several times a year. I’m always happy to be there; being away from London rekindled my love for it.  The secret to maintaining that relationship is that, London and I give each other plenty of space. It’s a long commute, but a good compromise.

Stephen:  Are you planning on doing a U.S. tour for BURIAL?

Neil:  I’d love to; any excuse to spend some time in the U.S. But I don’t think it’s going to happen this time round — not least because I’ve got so much work to do.

Stephen:  Will there be other Neil Cross novels published in the U.S.?

Neil:  I certainly hope so. Captured was published in the U.K. this year.  Hopefully it’ll be available in the U.S. sometime soon.

Stephen:  What’s in store for Neil Cross in the future?

Neil:  Luther, my new BBC crime drama, is due to screen in Britain very shortly— and hopefully in the U.S. shortly thereafter. It stars the Wire’s Idris (Stringer Bell) Elba, who you won’t be surprised to hear is truly extraordinary in the title role. I can’t wait for people to see it.

I’m working on a number of movie projects — one in England, one in NewZealand, one in L.A. My adaptation of M.R James’s classic Victorian ghost story Oh, Whistle and I’ll Come to You is about to go into production, screening in the UK Christmas 2010.  I’m writing a six-hour sequence of historical dramas for the BBC, and developing a number of other returnable series. Plus, I’m about half-way through, and very excited about, the next book.  (It’s still just “the next book” because I’m damned if I can think of a good title.)

Stephen:  Thanks, Neil!  I can’t wait until “Next Book” hits the stands!