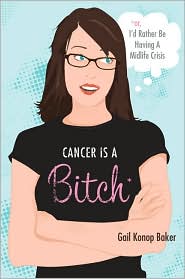 I am the
Accidental Memoirist. I never planned to write a breast cancer memoir, never
planned to get the cancer that would prompt that.

But in January
2006 after soon after completing my second novel about a woman who finds a lump
in her breast and thinks she might have breast cancer and wonders if she’s
lived a meaningful life and sent it off to my then-agent, I went in for my
annual mammogram and was told it was “suspicious.” A week later I was having
surgery and while I was waiting for my own results, I received an e-mail from
my agent (who didn’t know about my health scare) that said something like, I
don’t really like the breast cancer novel. I’m not sure I care whether that
woman has breast cancer or not.

But the writing
disappointment was a minor blip compared to how the diagnosis flipped my world and my sense of
self upside down. I was about the healthiest person I knew. I never got sick. No
aches or pains. I ran. I practiced yoga. I ate mostly vegetarian, whole grain
and organic. I was the person others consulted for health and anti-aging tips.

I felt like a
fake, a fraud. Even after I was told it was non-invasive and they got it all
out, I knew because I was relatively young, I was at high risk for recurrence
and I felt panicked and paralyzed. I couldn’t write, couldn’t think, couldn’t
do anything other than Google health sites and obsess about recurrence rates
and make homemade batches of organic facial creams. I even thought about
starting an organic facial cream company for vain hypochondriacs like me. I
asked my husband to bring home an electro magnetic field measurer (I’m still
waiting for that… do those even exist?). I suggested we move to Utah and live
off the land (even though I don’t know the first thing about gardening or
farming).

Finally after
weeks and weeks of this, my husband pressed a journal into my hands and said,
“You have to write this down.” I shook my head. I was not a journal keeper,
never had been and I did not want to write any of this down. But one day I
picked up the journal and a pen and without even thinking, I started scribbling
my deepest rawest craziest most intimate thoughts into this journal.

The first lines
were: “I’m sitting topless in the oncologist’s office on Valentine’s Day.
Cancer is a Bitch.” Once I started writing the words just flooded out. I shook
and wept and fell asleep and woke up and wrote some more. The ironic thing is,
as I poured these crazy thoughts out, I thought I would never EVER show those
words to anyone. I thought this was a way I didn’t have to burden my friends
and family with my crazy thoughts. (And now you can go buy them on Amazon right
now!) Eventually I wrote those thoughts into an essay I called CANCER IS A
BITCH and sent it to some trusted writer friends who said it was powerful and I
should do something with it. But what was it? What would I do with it?

Soon after that I
read that Literary Mama was looking for columnists and on a whim I pitched it
and they said yes and I started writing the column Bare-breasted Mama. To be
honest, it was painful to write and I felt naked, like I was exposing myself
both physically and emotionally, the responses from readers were so soulful and
many hadn’t even had cancer but they either knew someone who had or just
responded to the midlife issues about motherhood and marriage and career that I
wrote about. They thanked me for making them laugh (because believe it or not
the book is funny!) and cry. Their words gave me the courage to keep writing
and opening up and eventually leave my then agent and pitch the idea of a
breast cancer memoir to a new agent.

Next thing I knew
I had a new agent, a new book, a new lease on life.

So
not only did I not realize I was a writing a memoir but I also didn’t realize I
was writing my way out of my crazy funk. A while I know that the word cancer
scares people and they wonder why they should read about it. I have learned
from my readers that the funk I describe in my book and ultimately emerged
from… could be a divorce, losing a job, a bad injury, anything that knocks you
down and makes you wonder how and when you will get back up.

And I did….
eventually. Got back up stronger and more determined than ever. As a result,
since my diagnosis two years and ten months ago, I have written a book, finally
launched my career and my two daughters to college, run two half marathons,
gone to yoga boot camp and Italy (for the first time!) and trained two yellow
lab puppies. But more significantly, I discovered that the more I opened up,
the more the world opened up to me.

So why not? I say
most days now. Why not live more urgently, more openly, more curiously, more
honestly, more lovingly? Why not be the person I always meant to be?

Womansong, Pudding Magazine, Glass Review, and an anthology funded by the Ohio Arts Council. Her Literary Mama column "Bare-breasted Mama" made its debut in October of 2006.

Gail’s memoir, Cancer is a Bitch: Or, I'd Rather Be Having A Midlife Crisis was published by Da Capo Press in October 2008. She has also written two novels, Waitress Of The Month and Paris Smells Like Rotten Eggs. Her short story, “My Religious Education,”
won third place in the Madison Magazine Short Fiction Contest, chosen
by Jane Hamilton, was also a Glimmer Train Top 25 Fiction Open
Finalist, a finalist in the 2006 New Millennium Fiction competition and
a semi-finalist in the Boston Fiction Festival 2007 contest.

P.S. Please take a look at Sean Chercover's post here and encourage everyone you know to buy books as gifts this holiday season. Let's do our part to help one of our biggest benefactors – the bookstores.