Since so many of our compatriots are in Baltimore, having a blast at Bouchercon, indulge me while I feel sorry for myself for a few minutes. There really is nothing worse than having to pull out of a conference unexpectedly, which is what happened to me this week. I learned my lesson at Left Coast Crime in Denver – if you aren’t 100%, doing the conference right is very, very hard. I’d just come off emergency surgery, was weak as a kitten and still feeling horrid, and I went and tried my damnedest to be "on." It didn’t work. The pictures show a pale-faced wraith with a half smile, and all I could think about was getting back to my room to lay down.

For the authors, it’s a show, and you’re the star. You need to be able
to be on, to focus on the readers, to give them a slice of your
personality. You’re selling yourself as much as you’re selling your books. So, word to the wise. If you can’t be author boy or author girl, don’t go. Nothing’s worse than feeling poorly at a conference.

Okay. I’m done with the whining.

I thought we poor, wayward souls left behind could do some goal setting today.

Are you a listmaker who loves to cross items off your list, or are you a catch as catch can, try to remember, tie a string around your finger type? It’s a true assessment of your personality, I think. There are those of us who like to be hyper-organized, and those who let the chips fall where they may.

Though I’m a "pantser" when it comes to writing my novels, I like to be organized. I like to make lists, to tick off my actions. It gives me a sense that I’m getting something accomplished. I used to carry a day runner and have daily lists, weekly list, and monthly lists. Now I’m more electronic, and have a online notepad that I write my lists on. It’s not as satisfying, actually, so I’m looking at going back to the old way.

So aside from the day-to-day and week-to-week lists, I’ve been thinking about making myself a goals list – where will I be in One Year, Five Years, Ten Years? Why? I woke this morning wondering where I was going to be in ten years. I received the cover art for my 4th novel yesterday. (It’s BRILLIANT!) I’m revising that book now and will start my research for the 5th next week. Which in all actuality is my 6.5th, since my first didn’t sell and I wrote a novella prior to that. 6 full length novels. 6. That’s 600,000 words. I feels like an accomplishment. And it’s also going pretty damn fast, considering I started writing in 2004.

Yes, there’s a lot of writers with many more published books, but there’s also many people who never finish the first. So I had a little moment of triumph, all alone in my living room, with the cat staring at me like I was nuts. She likes it when I sit quietly and whistle occasionally, not smack my head and mutter incoherently.

And thus, I woke wondering where I was going to be in ten years. I spent last week in Omaha, with one of my favorite people and authors, Alex Kava. With her manager Deb at her side, they took me to bookstore after bookstore, and I got to watch a NYT bestseller in action. It was, to say the least, humbling. We did three audience based events, all of which went very well. Alex is a known commodity in Omaha the way I’d like to be a known commodity in Nashville. She has roots there: family, friends, but most of all, fans. Tons of them. Of every different stripe. It was so cool to sit beside her and meet all of these people, who I must say were incredibly gracious to the southern interloper.

Alex just published her 8th book, a fantastic title called EXPOSED. All of her titles have been in hardcover, which gives her a major leg up on me. But it’s more than that. She is accessible, sly and witty. The fans love her to pieces. They love Maggie O’Dell. They love having a chance to meet her. When we spoke to the "Detective Novels and Society" class at the College of St. Mary’s, Alex’s alma mater, I was struck by the respect she commanded from the students. She is something I aspire to be, a solid writer with a large fan base and a sense of humor about the whole process.

So I guess the first thing to consider when setting a goal is an act of emulation. Find your Alex. Find an author who you think embodies your career path, someone who you respect, whose writing you enjoy, whose publishing house does it right. Then look at where you are. Are you unpublished, writing in a vacuum, not a member of any organizations, never been to a conference? Are you with a small press and want to get into a major house? Are you a short story writer who wants to become a novelist? What is your next step?

Looking back to my own path to publication, I set small, attainable, intermediary goals for myself so I didn’t get discouraged. And that’s vital. You can’t set a goal like this: It is October 2008. I will write the great American novel by October 2009, sell it for a seven-figure advance, get coop in every store, be a Barnes and Noble pick and win the Edgar award. That’s setting yourself up for failure.

Set attainable goals. I will write 1,000 words a day. (You do that, you’ll have a rough draft in 3 months.) I will join my local chapter of Sisters in Crime and meet some new people. I will buy a subscription to Publisher’s Marketplace and put up a website. I will blog weekly. I will read at least two books a week. I will stop saying what if and start doing. My glass will be half full, and I will see others in a more sympathetic light. I will query my manuscript.

And follow through. I did all of the things I just mentioned, and found myself with a novel, an agent and a blog gig.

So we’ve set the small goals to get you started. When do you set the big goals? When do you start thinking about the possibility of becoming a bestseller? When do you lay out where you want to be in ten years?

Well, I don’t have the answer to that. I’m afraid to worry about the future. I feel much better setting my goals for the year, and not worrying about the what ifs. One of my favorite saying is:

"Control the things you can control."

You can control how many words you write. You can control your pace, your research and your quality. You can be open to new experiences and read out of the genre. You can. Remember that always.

So with that in mind, what are your short-term goals for your career? Have you set any long-term goals? 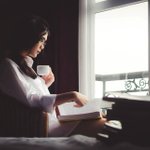