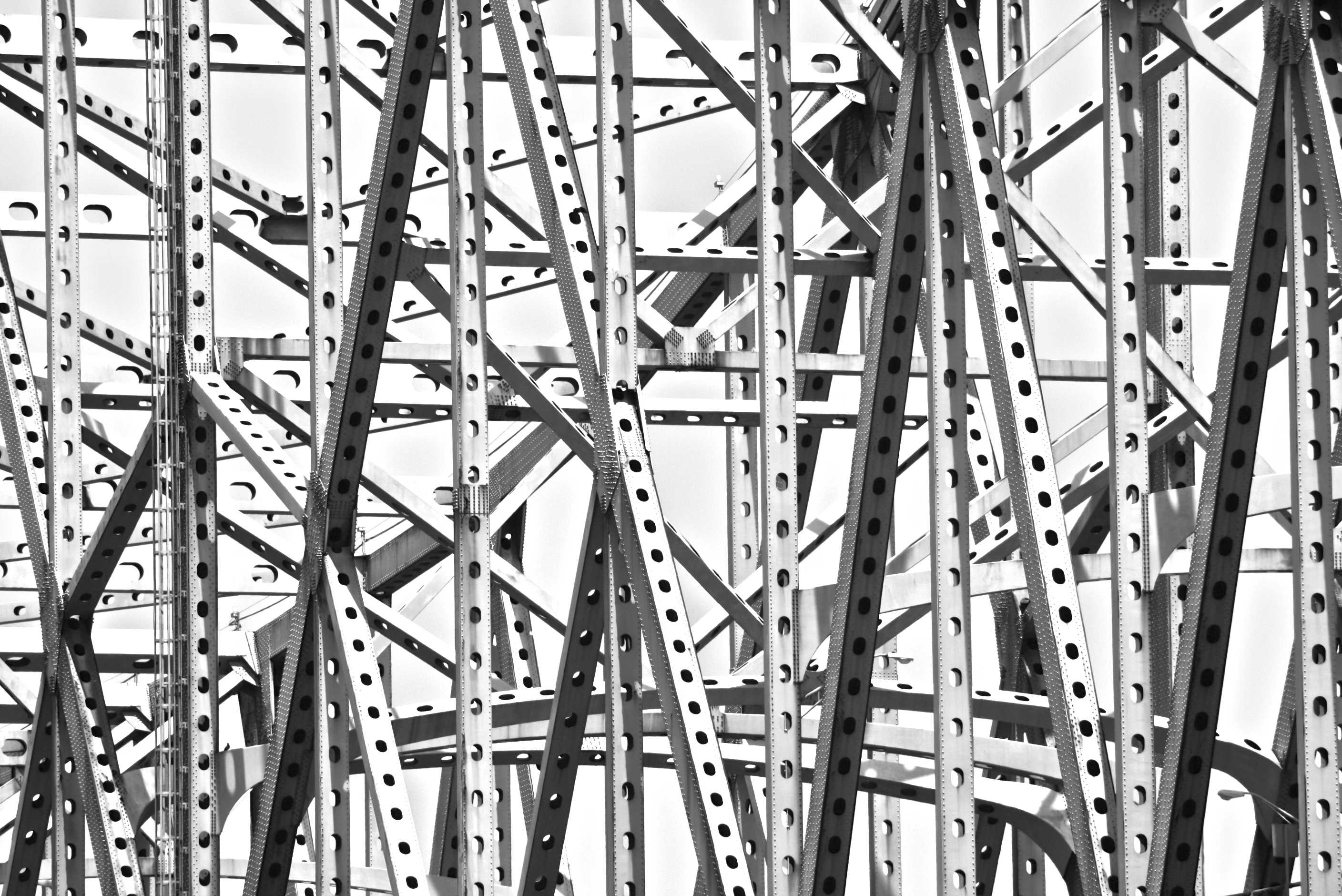 This is the interior structure of a bridge, and every one of those supports is necessary: 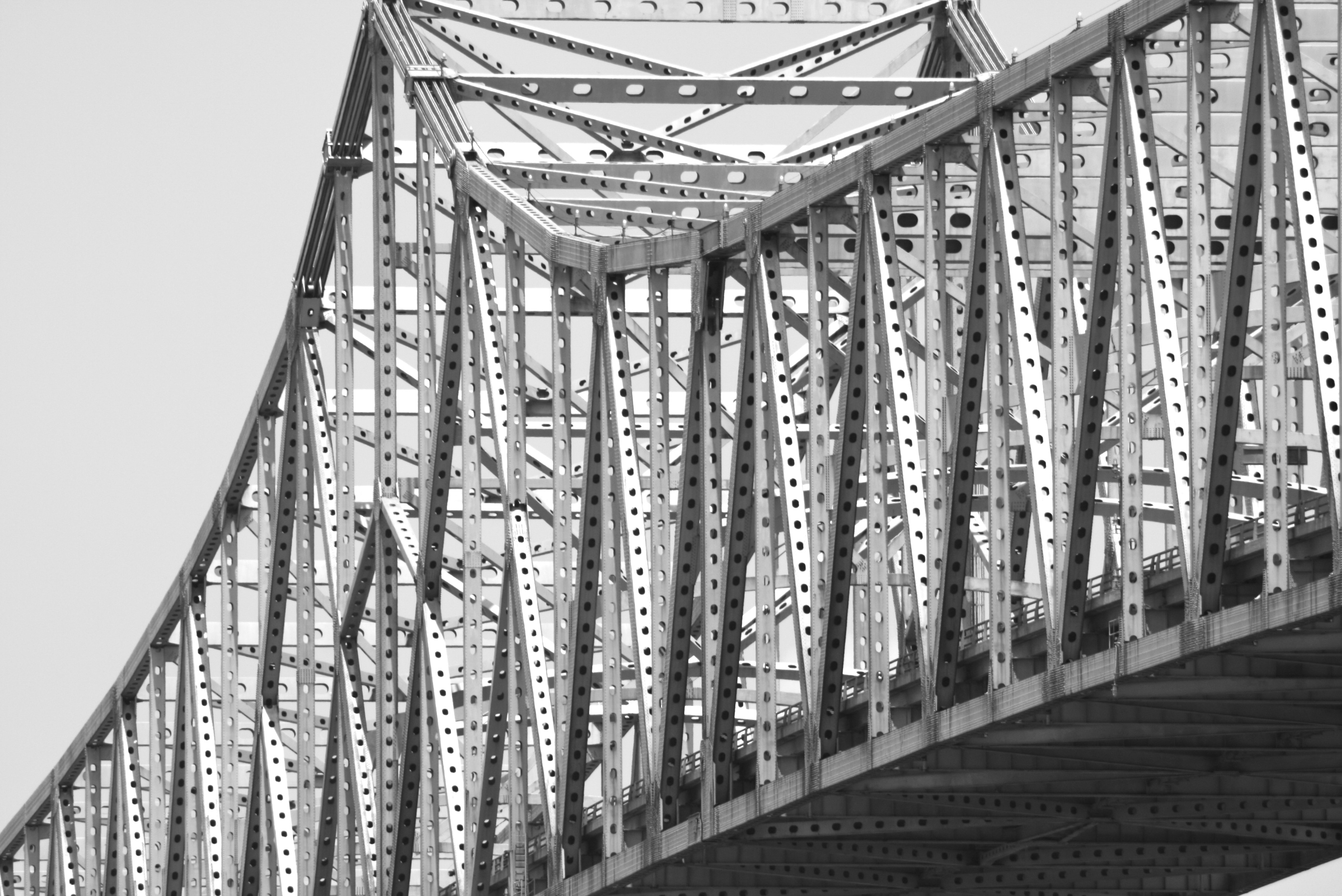 But if you look closely at those supports, they work by being at cross angles—cross purposes. They are not all the same—some are even curving in the background in ways that seems counterintuitive to supporting the whole. Each one of these supports has more than one face: the solid side portion, the face with the sun hitting it. Darker, lighter, bent, straight, rusted in spots, repainted in others.

The main characters—and important secondary characters—form the foundation of the story: 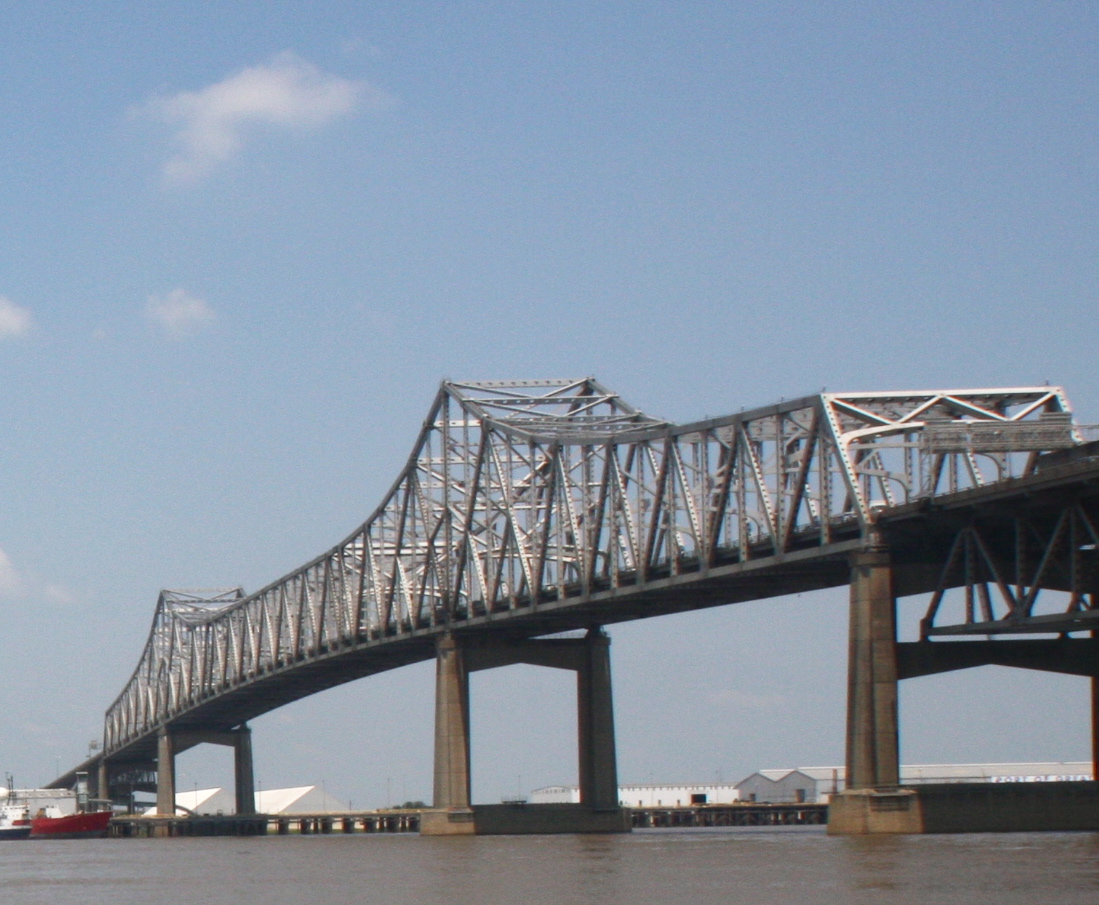 Doesn’t this (admittedly craptastic snapshot) strike you as a three-act story? It has entrances and exits, it suspends disbelief by suspending us over water, allowing us to travel from here to there. But without the world of those minor characters holding the framework together, the whole thing wouldn’t work.

But this is, perhaps, where the metaphor breaks down most for a lot of writers. It’s a little too simple to think of story structure like a bridge and the minor characters as support of that story because we’re then thinking of those characters purely as a matter of how they must function within the story to make the final outcome work. Writers have a tendency to work exceptionally hard on the main characters and then slot in the minor characters, utilizing (whether consciously or unconsciously) archetypes: the underdog, the nerdy sidekick, the tough guy sidekick, the “girl,” the mentor, etc.

If you look at that first image, it’s black and white, all sharp contrasts, but each support is essentially interchangeable with the next one. There is no flavor there, no color, no uniqueness, and therefore, for as many supporting players as there are here, there is not a single one of them memorable. And if your main characters are supporting a world and a story full of unmemorable characters, then the conflict and the sense of being immersed in a fascinating world will be lost.

We can use cooking—or music as metaphors. Change an ingredient in a recipe and the outcome generally changes. Change the amount, even, and you’ll end up with an entirely different flavor. Same thing with music—add in that odd woodwind instrument that I always hear in Celtic music but never quite identify and you’ll have a vastly different effect than a trumpet.

So how do you go about creating memorable secondary and tertiary characters?

I’ve heard the old adage that each character is starring in his or her own story, and that’s true, and it’s useful to remember. They have their own goals and their own needs. But for the purposes of a novel, you cannot always show what they think their own story is in that moment that they have on stage, so that sort of advice can sound great but end up not all that practical to apply.

So what can we show?

This isn’t just a “trait” or a schtick. It drives me a little bit bonkers to read a story where the tertiary characters are reduced to one or two personal “ticks” – like a character (and I am picking a notion randomly and hoping no one has done this)… twitching. Or substitute any single physical habit like talking with a lisp or limping or smoking or blinking rapidly or speaking with a husky voice. These are all fine starting points, but there has to be more or the character is going to be one-dimensional.

I have a character in book one (Charmed and Dangerous) who is a minor character nicknamed “The Mountain.” He’s a rather large guy, a simple fellow who is eager to please the smarter henchman, Eddie, who is his friend. He wants to impress Eddie and the world, and he explains to Bobbie Faye’s brother, Roy, that he wants to one day be in the Guinness Book of World Records. To do this, he has been collecting doorknobs. Roy doesn’t quite realize the significance of this until The Mountain gleefully explains that he has one for every person he’s killed, and he wants to call Guinness, but Eddie won’t let him. At this point of the explanation, Roy is tied up and in serious doubt that he’s going to make it out of there and he’s too afraid to ask if The Mountain has taken a doorknob from his home.

Style is a close associate to personality, but not wholly so, because it’s a presentation by the character of themselves to the world. How they want to be perceived. Or maybe, the lack of thought into how they are perceived. Do they dress well? Poorly? Like a hooker? A pimp?

But we can’t stop there—that’s just surface. How does their style affect their perceived choices in life? Do they think of themselves in a negative way? Positive? For example, a hooker who thinks this is the best she can do and it’s a good gig and it’s feeding her kids and/or her mom will strut that clothing style in a different way than the woman who used to be a corporate executive, who’s loss of a job two years ago and her home and everything thing else she had and now this is the only thing she can do to feed her kids. Is there a conflict in how they present themselves vs. how they wish they could present themselves? Is there any irony?

How do they speak? Everyone should not use the same level of grammar, the same sentence structure.

Style is the soul sister to Attitude.

An example I love is from the movie Witness. Harrison Ford is a cop from New York trying to solve a murder by getting a better idea from the witness: a young Amish boy. He finds himself attracted to the boy’s mother, Rachel, in spite of their many differences. Quietly vying for Rachel’s affections is the Peter Godunov character, who has one distinct advantage over Ford—but it’s also his disadvantage: he’s Amish. He was a good friend to Rachel’s (dead) husband, and he wants her. He is attractive to Rachel, but not as fresh and fascinating as Ford’s New York cop, who represents an entire forbidden world just outside Rachel’s grasp. I don’t remember all of the details, but while the Godunov’s character is helpful in many ways to Rachel and her family, he is clearly annoyed with Ford’s continued presence, though he is extremely polite. He is the epitome of what a strong Amish man is—and there are a wonderful couple of scenes of a barn building where the two men try to out-work one another. Rachel, at a late point in the story, has chosen Ford and tries to seduce him, and Ford makes himself turn away. He makes the decision for them both, because he knows it would never work—he couldn’t live in her world, she couldn’t live in his. As Ford drives away, the Godunov character is purposefully walking up the lane to go court Rachel.

That film is 24 years old and I have not re-watched it in more than 20 years, and I can still remember that character.

Now… whether TV or film or books, name a few secondary / tertiary characters that you just remember off the top of your head, without looking them up. Why are they memorable?

And don’t forget, coming from a woman who has a ton of memorable characters—main and secondary (!!) – our ownAllison Brennan’snewest book,CUTTING EDGE, hits the stores on TUESDAY, July 28th!

When security specialist Duke Rogan’s state-of-the-art computer system fails at a controversial bio-tech firm, a raging inferno spreads, and a grotesquely charred body is discovered in the aftermath. With an extremist anti-technology group claiming responsibility, the case grows even more complex when the victim’s autopsy unexpectedly reveals that he bled to death. Heading the FBI’s domestic terrorism unit, Agent Nora English is fiercely determined to track and stop a sadistic assassin.

18 thoughts on “Secondary and Tertiary Characters”