I was at the Horror Writers Association Stoker Weekend last weekend (you’d think that it would be a BREAK in touring to be in one place for three days straight, but I’m still recovering).

It was a fabulous time, but the truly transcendent moment for me was meeting Richard Matheson.

We all meet authors all the time, now (and in Hollywood, directors and actors, too). And I’ve had many episodes of fan girl limerence. But there are certain people who loom so large in your conscious and subconscious and unconscious being that even when you’re in the middle of a perfectly adult conversation with them, they don’t seem quite real. They are simply mythic.

Richard Matheson is that for me. 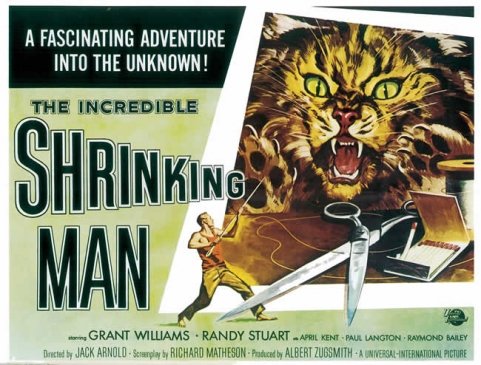 There are several layers of that, too. Obviously the man is a giant in the genre of supernatural thrillers, combining horror, the psychological thriller, mystery, suspense, fantasy and sci fi into one classic novel and novella after another, that spawned one classic film after another: THE INCREDIBLE SHRINKING MAN, I AM LEGEND, WHAT DREAMS MAY COME, A STIR OF ECHOES, HELL HOUSE, DUEL, NIGHTMARE AT 20,000 FEET – and pretty much every TWILIGHT ZONE episode that springs to mind when you think of the series.

I read those books so early on I can’t even tell you how old I was… they were always there in the shelves of our house because those were among my Dad’s favorite books. Even before I was old enough to understand them I was drawn to the covers with images of a man battling a giant spider with a needle that was for him as big as a sword… that creepy, twisted Hell House… some terrible creature on the wing of a plane.

So Matheson is for me inextricably linked with my dad. He is my father’s age, and has the same luminosity of spirit along with those dark imaginings, and together they shaped my own tastes in reading and later in writing.

Dad has given me many other writing gifts besides Matheson. That library of his included everything Bradbury, Poe, Burroughs, Le Fanu, Stoker, Shelley and Asimov ever wrote, plus the complete Alfred Hitchcock Presents series of anthologies, and many other lesser-known fantasists.

Dad grew up in Mexico City after his family had fled first Russia and then Tokyo (after losing everything in the Tokyo Earthquake). Put mystical Russians in a country like Mexico and the combined total of magical realism is truly off the charts. So even though Dad grew up the son of a scientist and dedicated himself to science himself, he has a love of the ghostly that has nothing to do with the laboratory. I and my siblings grew up with campfire stories of La Llorona (Mexican ghost) and Baba Yaga (Russian witch) and Quezacoatl (Aztec feathered serpent god) that Dad made sound as they’d really happened just a few days ago. It’s no wonder that my grip on reality is a little – loose.

But at the same time I learned from his scientific bent (he’s a biologist and geneticist) and love of research. Even though I write fantastical situations, I have to believe they really could have happened that way, so I’m obsessed with how and why paranormal events actually occur in real life, and how I can bring the most realism to the spooky scenarios I write.

I was also blessed that from the beginning my father never had the slightest doubt that I was every bit as smart and capable as any boy out there, or, truth be told, clearly superior. I never, ever had any feeling that I was second best because I was a girl. That should be a given, but even now, NOW, it’s still not how many young girls grow up, and I’m grateful to have been raised that way as a matter of course.

One of the greatest joys I have as an author is that my father takes such pleasure in my stories. Not the fact that I’m a writer; it’s nothing so material as that. He just loves what I write, and reads my books over and over again, just as he read Poe and Matheson and Bradbury. And that is an amazing thing – that I’M now on my father’s shelves, with all of those giants that he introduced me to.

I was so thrilled to meet Matheson on Father’s Day week because it brought something full circle for me. My dad opened the door to this fantastical world to make it possible. Those worlds and those giants, and this magical author world as well, are real to me now, because of him.

Thanks, Dad, and I love you beyond worlds.

So, ‘Rati, what was on your fathers’ shelves? What gifts did your Dads give you that made you writers? And/or – tell us about a legend you’ve met!

And a very happy Father’s Day to all the Dads.

(In a fit of overextension, I’m also guest blogging at The Lipstick Chronicles today, and if you’re in L.A., I’m signing at the great The Mystery Bookstore in Westwood at 11 am.)

23 thoughts on “Richard Matheson, my father, and me”