An introduction by Zoë Sharp.

By the time you read this, I shall be in Northern Ireland on a series of photoshoots and, as I'm going to be out of email contact until next week, Stuart MacBride has very kindly offered to come to my rescue and step in as guest blogger.

If I say that Stuart is huge, that's not a comment on anything other than his literary status. He's been topping the UK bestseller lists since his first book, COLD GRANITE, hit the shelves. He is the recipient of the CWA Dagger in the Library and the Barry Award, and has also just won the ITV Crime Thriller Award for Breakthrough Author of the Year for BROKEN SKIN (BLOODSHOT in the US). All in all, he is a gentleman, a scholar and an acrobat – not necessarily in that order. (See, he searches out the most embarrassing bit he could possibly find from one of my books, and proceeds to read it out loud in front of 450 people at Harrogate, and what do I do? Say nice things about him. Mutter, mutter ….)

Without further ado, please welcome the Bearded One, and all being well I shall return in a fortnight – Zoë

And now that Zoë's disclaimer for any responsibility is out of the way, let's talk dirty*…

Something strange began to happen to me the moment I went full time as a writer: as Zoë says, I became a much bigger man. By which I don't mean that I became important, or special, or even taller… actually, I've been getting shorter for the last fifteen years. Shorter and rounder. For some God-forsaken reason I'm slowly turning into a pasty bouncy castle with a beard. A podge.

A sexy podge, but a podge nonetheless.

I never used to be — I used to be slim and fit and a bit of a hottie — it's the writing that's done it. Back when I worked full time for THE MAN I'd get back home from work and sit down to indulge in my dirty secretive hobby: writing. So that's all day sitting in an office, followed by all night sitting in the study making up lies about people who don't exist. Not the most active of lifestyles, but at least back then I was getting a bit of exercise walking to the shops for lunch. Now the only things that get exercised are eight fingers and the lump of gristle between my ears.

Worse yet, I came up with a new hobby: cooking. Well, I couldn't keep writing in my spare time, could I? That would just be silly. You don't take up professional dentistry, spend all day traumatising people by drilling holes in their teeth, and then go home and start hacking away at your neighbour's mouths with a hammer drill, do you? Well, not unless you want to feature on the evening news in a couple of years time. No, you find yourself a decent wholesome hobby, like drinking heavily, or line-dancing dressed up like Barney the Dinosaur.

And as my purple Tyrannosaurus Rex costume is still in the dry-cleaners after an unfortunate semolina-related mishap, I took up cooking. It started out small, just the occasional pot of mince and tatties… I thought I could handle it. I could stop any time I wanted. Then I started dabbling with more exotic things like stews, roasts, and, to my eternal shame, fondue. And then I tried the hard stuff: soup.

What could be more distracting than soup? It's like sex in a pot… Well, maybe not sex, not unless you're into scalded genitals and finding bits of diced carrots in your intimate crevasses. But there's something strangely hypnotic about the alchemical nature of combining random stuff you find in your fridge and transforming it into SOUP!

I suppose soup is a strange obsession for someone who writes police procedural thrillers that often get described as gorier than shoving a rabid weasel down a haemophiliac's trousers. But there you go, we all have our dark secrets. And the darkest of my dark secrets is the infamous MUSHROOM SOUP.

When my editors decided to take a punt on my first book, COLD GRANITE, they asked me to write a small bio to go with the photo of the thin tall bloke on the cover. So I did:

"Stuart MacBride has scrubbed toilets offshore, flunked out of university, set up his own graphic design company, worked for some really nasty marketing people, got dragged into the heady world of the Internet, developed massive applications for the oil industry, drunk heaps of wine and created the perfect recipe for mushroom soup…" 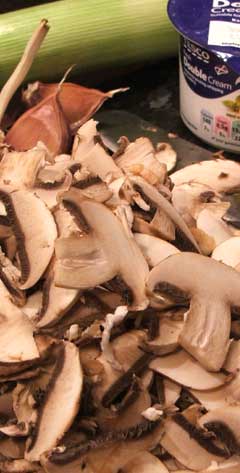 That bit at the end has got me into more trouble than pretty much anything else. As soon as I realised I was getting more emails about the damn soup than the damn books I dropped the soup thing from the bio, but by then it was too late. Four years later and I'm still getting mushroom-soup-related queries. Seriously, these people aren't asking about recurring themes, metaphors, or the importance of cannibalism in modern crime fiction. No, they want to know about bloody soup.

Up till now I've always played the 'it's a secret I'll take with me to other people's graves…' card, but as I'm guesting here I thought, why not? Get it out in the open. Plus when Zoë asked me to fill in for her here at Murderati, she said it would be bad form to bang on about my books, and I can't think of anything further removed from tales of bloodshed and mayhem than publishing my until-now secret recipe for mushroom soup.

Start off by rehydrating the dried porcini in a small bowl of hot water, they'll take about 20 mins to plump up and soften. 3oz seems like an odd amount, but it's about half a little packet.

Next, melt the butter in soup pot, chuck in the sliced fresh mushrooms and season with salt and pepper (the thinner you slice them the more surface area they have to ooze out mushroomy goodness). Sweat down the mushrooms until they're soft and all the moisture has come out of them. Then add the chopped thyme, leeks, and garlic. Let them heat up in the mushrooms for a couple of minutes, then pour in the milk and bring it up to a very gentle simmer. Thyme and mushrooms go incredibly well together, trust me on this…

Tear or slice up your bread and stick it in a heatproof jug. Chuck in the rehydrated porcini and a couple of ladles of the warm mushroomy milk, then liquidise it all up with hand blender. If you don't want to throw out the soaking liquid, make sure you strain it before you add it to the soup or it'll be full of grit and sand and bits of dead bugs.

Blending it all up should give you a jug of very tasty, intensely mushroomy moosh: tip it back into the pot. Add the double cream, chopped parsley, then check for seasoning — mushrooms and cream are both sponges for salt and pepper, so don't be shy about it — then serve.

If you're feeling all summery, leave out the bread and substitute a good quality, free-range chicken stock for the milk. It won't be quite as rich, but it'll be a lot lighter. You could add a slug of brandy or a couple of glugs of white wine to the mix, but for God's sake make sure you add them after the rest of the liquid or the mushrooms will soak up all the booze. This might seem like a good thing, but it'll just make them all bitter and nasty. Like an OAP with a septic leg and a colostomy bag full of second-hand chilli. You really want to be eating that?

See — I get the chance to plug my books to hundreds of new readers and instead I witter on about soup and finish with a sodding recipe. How noir am I?

* This is, of course a lie. There's no dirty talk at all in this post… Well, except for the gratuitous use of the word 'fuck' right here in the footnotes. But we're all grownups right? It's not like I'm advocating you all go out and have sex with badgers, is it?