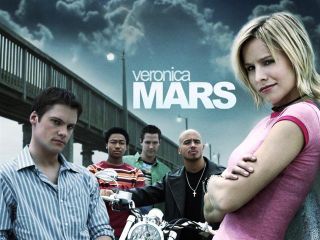 Last year my young teen daughters and I watched all three
seasons of Veronica Mars on DVD. If you’re not familiar with the short-lived
television series, it’s essentially a smart, modern-day Nancy Drew with wry wit
and sharp dialogue. It’s one of the few shows that appeals to both adults and
teens and the single best series I’ve found to stimulate conversations with my
older kids about the real, everyday dangers they face as young people in the
world today. The cancellation of this show was truly sad-the stories were
fantastic, the acting terrific, and it tightened the generation gap.

“Veronica Mars is . . . a balance of murder mystery,
high school and college drama . . . featur[ing] social commentary with sarcasm
and off-beat humor in a style often compared to film noir. Set in the fictional
town of Neptune, Veronica Mars starred Kristen Bell as the title character, a
student who progressed from high school to college during the series while
moonlighting as a private investigator under the wing of her detective father.
Episodes have a distinct structure: Veronica solves a different “case of
the week” while continually trying to solve a season-long mystery.”

The show didn’t sugarcoat conflict, though humor and
irony were often used. Topics like date rape, cheating, drugs, child
molestation and teen-age drinking were handled in both an entertaining and
thought-provoking way.

For example, part of Veronica’s backstory was that she
was drugged with GHB the year before the show began. She never told anyone
about it, because she didn’t remember anything-except that she was no longer a
virgin. As the story unfolded over the first season, we learned that someone slipped
the drug in her drink and handed it to her. At a big party, you often don’t
know where your drinks are coming from. My oldest daughter was floored, and
said she’d never accept a drink from anyone again-she’d open the can or bottle herself
and not let it out of her sight. 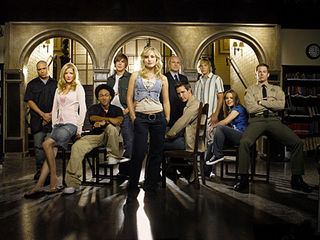 In one episode, Carmen comes to Veronica when her
ex-boyfriend Tad blackmails her with a video he took with his phone of her
sucking a popsicle in a sexually explicit manner. She’s terrified he’ll follow
through with his threats to post the video on the Internet. After watching this
episode, my oldest daughter finally got it. She was nearly 14 at the time, in
8th grade, and didn’t understand why I wouldn’t let her have a MySpace page or
a computer in her bedroom.

It’s not about trusting my daughter-who wants to be a
cop, is a dedicated athlete, and lives by the mantra: “my body is my temple”-it’s
about everyone else in the world. Even your friends. Because all it takes is
one pissed off friend to take an innocuous (or not so-innocuous but ‘fun’)
image or video and send it to everyone’s cell phone, or post it on the
Internet.

As I told her, “Once it’s out there, you can never
get it back.”

They’re kids. We hope that we raise them with enough
common sense and street smarts so that when they’re eighteen they’ll make the
right decisions. They’ll screw up sometimes, but until they’re eighteen parents
need to establish some ground rules because some mistakes have
long-lasting and far-reaching consequences. And today, if it’s caught on camera, everyone in the world will know about it in eight seconds flat.

Kids don’t think parents know anything. We obviously know more than they think, but times
do change. When I was a teen, “date rape” was essentially pressuring and manipulating girls
to have sex–not drugging them into forced compliance. Alcohol, marijuana and
occasionally cocaine was the drug of choice in my high school, not heroin and
meth and eXtasy. I never had to walk through a metal detector at school; now more public high schools in major cities–and some in suburbia–have them than don’t. Even many younger grade schools. I had earthquake drills; my kids have lockdown drills.

This is why I miss Veronica Mars. It connected me with my
teens in a way no other television program has done. When we talked about
Carmen being caught on video, my oldest daughter finally understood why I didn’t
want her photos posted online. Why I didn’t want her to send her best friend a
completely innocuous picture on her cell phone of her in three different
bikinis when she couldn’t decide which one to buy. Do you want that picture
sent to every boy in your school? Forwarded to every friend with a cell
phone? Do you want people you’ve never met to see you at the movie theater or a
ballgame and know your name and how you look practically naked?

We have to take charge-parents and the teens of today. The
police have more than enough on their plate to not add to it teens voluntarily
meeting up with predators and being manipulated into sex, raped, murdered, or
trafficked. Honestly, they have to prioritize their cases and focus on the hard
core child pornography–kids under the age of 14 who have been sexually
exploited and abused. Even then, the caseload is staggering: an April 2008
Washington Post article revealed the results of a thirty-month long sting in
Virginia where child pornography-explicit sexual material with minors under the
age of 14-was found on 20,000 private computers. Those computers were
responsible for over 200,000 individual transactions. In one state alone. And only the public files shared with undercover cops. These are a small percentage
of the hard-core child pornography out there being shared by pedophiles and
perverts, estimated at less than 20% in just this one operation. Extrapolate
that to fifty states and you can see there is an epidemic of such huge scope
it’s mind-blowing.

When you add in the sexual harassment of teens online,
the numbers are even more terrifying. Law enforcement can’t take care of it
all. If every cop in the country
worked 24/7 stopping online child pornography, they still wouldn’t be able to solve a
fraction of the hard core cases.

It’s up to parents and teachers and communities and
churches to educate our kids and hope that they get smart. Many of the assaults
that result from online chats or places like MySpace are because a victim
willingly agrees to meet their attacker-thinking that they’ll be safe. We have
to teach them to protect themselves and make smart choices.

The FBI produced two public service announcements. They
don’t have the money to pay for the advertising, so it’s up to individual
television stations to play them as PSAs-which is usually in the wee hours of
the morning. They’re each only 60 seconds. They’re worth watching. They’re worth sharing with your kids. (I posted the links in case I messed up the YouTube embedding thing.)

Everybody Knows Your Name

I’m not the strictest parent on the planet, but there are
some unbreakable rules in our house:

1) No computers, tvs or video games in the bedrooms. We
have two computers in the den which the kids can use, plus my computer and my
husband’s computer. It benefits parents to learn technology and learn how to track histories, even when kids learn how to delete history.

2) I get all passwords to all accounts, email or
otherwise. Cell phones are a privilege. Abuse of cell phone texting, i.e.
anything profane or sexually explicit, the phone will be disconnected. I don’t
check daily, but I spot check. Sort of “surprise inspection” time. I have taken away the cell phone before. And my kids know I will do it again.

3) No personal information on line. No chat rooms or IM with anyone they do not personally know from school or sports.

The last is actually the hardest to enforce. Even if your
kids obey, you have no control over what their friends post. This is why
education is so important. Even if your kids are being 100% safe, you can be
assured that either they’ll mess up (deliberately or by accident) or their friends
aren’t being safe. I have no qualms talking about these subjects with my kids’ friends. If their parents have a problem with me discussing it, they’re welcome to call me and I’ll be happy to share statistics and facts of which they’re likely not aware.

One last story . . . my oldest daughter accidentally switched two numbers when texting a friend of hers from school. Someone responded. They went back and forth 2 or 3 times, then she said, “Who’s this?” because she thought something was off. The other person teased back without telling her, so she typed, “I thought you were someone else. Don’t text me again.” He persisted. She ignored him. Then she gets a call from the number and doesn’t answer it. She’s scared. She has a voice message. She listens to the voice mail–it’s a mother yelling at her for texting a nine-year-old boy.

I called that mother. I explained what happened, and that my daughter is a minor in high school and didn’t know she’d typed a number in wrong. At first the mom was upset, then she calmed down. She didn’t cast any blame on her son, however; she was certain that his older step brother was somehow responsible.

I didn’t say what I wanted to say, which was, why does your NINE YEAR OLD have a cell phone with TEXTING??? Okay, maybe I’m being judgmental, but I don’t see the purpose. There are phones that you can program to call only a couple numbers if you’re really concerned about reaching your younger children. But seriously. Nine? And I thought my second grader was exaggerating when he said half the kids in his class had cell phones. Maybe he wasn’t.

Okay, now this really is the last story . . . when I was at the FBI Citizen’s Academy, the SSA in charge of child cybercrime said that if you let your daughter have a webcam on her computer, in less than six months there will be naked pictures of her on the internet. Predators are good at lying, manipulating, and convincing teens to do almost anything in the “privacy” of their own bedroom.

Talk, listen, and enforce. As I tell my kids–take everything you read online as a possible lie–if he says he’s a 17-year-old high school junior from Texas, it’s a 50/50 chance he’s not.

And maybe someday, a show like Veronica Mars will return. But until then, don’t wait to talk about the tough subjects with your teens.

19 thoughts on “I miss Veronica Mars”