By all rights, I should be telling you today about the fabulous (but grueling) Book Passage Mystery Conference that just concluded Sunday night. It really was grand, with some terrifically talented writers in attendance, and not all of them were on the faculty. This was a group with strong, solid writing skills who came to figure out how to hone their work and how to sell it.

But there will be lots of other folks blogging about the conference this week and filling in the details on their favorite panels and presentations. (Mine would have to include “The Definition of Murder,” by Dylan Schaffer, the defensive attorney representing the BART police officer who killed an unarmed man in Oakland on New Year’s Eve, and the crime fiction primer David Corbett offered based on a murder case presented by FBI Supervisory Special Agent George Fong.)

But the thing – the person — that’s uppermost in my mind is Patty Smiley. 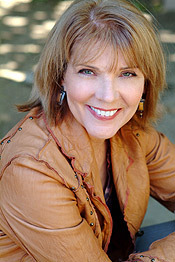 Patty and I met at the very first convention I ever attended, Left Coast Crime in Monterey, back in the Spring of 2004. Patty was my role model. We both came out of the business world before our writing days, we were with the same publishing house and we had the same editor. Only Patty did it one year before I did, so she taught me all the ropes.

Here we are, five years and seven books later (four for her, three for me), and we finally find quality time to catch up again as Patty joined the faculty at the Book Passage event. I picked her up at the airport and it didn’t take even one freeway exit to get into it.

We’ve become inured to the casually asked “How’s it going?” from supermarket bag stuffers, telemarketers and the neighbors we pass on the way to the bus. It’s a polite thing to say, but they don’t really want an answer. Heaven help you if you really reply, listing all the aches and pains of your incipient lumbago or detail your worries about your mounting credit card debt. They’d run for the hills, thinking, “Who was that crazy person? I was just saying ‘hello.’”

Not Patty. When she asks how you are, she wants to know. And then she listens.

So I unloaded. Every disappointment, fear, concern, ailment and wound that has been crawling around my feet and up my legs like slithery snakes for the last few months. All of it, gushing out, in a lava-hot tirade of angst.

It’s a forgotten art form, listening. We half commit to hearing a response, all the while waiting for that bon mot – that half split-second — when we can jump in with our own take on the subject. After all, it’s not a conversation unless it’s equal time, right?

Not Patty. The only time she speaks is to ask for more detail. None of that “I know how you feel, I’ve got the same kind of problem with my in-laws. Let’s talk about me.”

And then she does something remarkable. She weighs all the words and offers practical, reasoned, rational, objective suggestions. Nothing heavy-handed. Nothing condemning. Just “here are some things you might think about doing.”

I’ve only had a few people in my life like that. My sister. Judy Greber. I hope they know what a featherbed of support they’ve been.

But today I also have Patty Smiley, and I want to thank her.

Tell me ‘Rati? Who is the wise counselor in your life? Who really listens after they ask, “How are you?”