(WARNING: This is what happens when you wanted to write Wacky-Pack stickers when you grew up, but they stopped making them.) 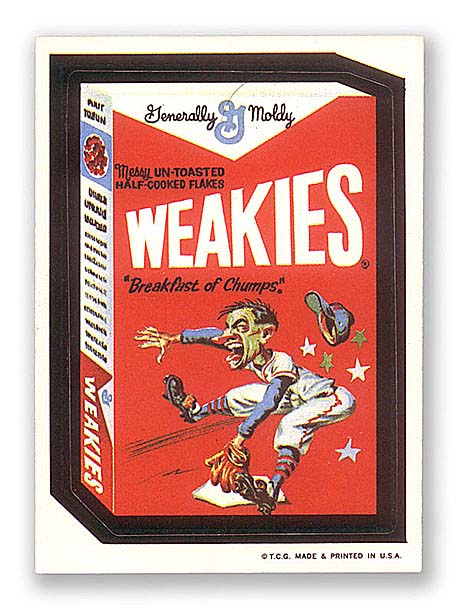 Poems for a New Economy

You do not do, you do not do
Any more, old Greenspan shoe,
Under which I shall writhe like a grub
For innumerable years, poor and white,
Barely daring to eat or pay MWA dues.

Greenspan, I would've liked to kill you.
You died before I had time–
Mortgage-heavy, a bag full of Fed,
Ghastly statue with eyebrows
Big as two Frisco seals

And a head in the freakish Atlantic
Where it pours Friedman green over blue
In the waters off beautiful Wall Street,
They all used to drink of you.
Ach, du.

I have always been scared of you,
With your Prime Rate, your gobbledygoo.
And your cut-glass eye, bright blue.
Panic-man, panic-man, O You–

Not God but a spreadsheet,
So red no sky could squeak through.
Barbara Walters dated you.
(That woman adores an Economist,
The graph in the face, the bwute
Bwute heart of a bwute like you.)

You stand at the blackboard, Greenspan,
In the picture I have of you,
A cleft in your math instead of your foot
But no less a devil for that, no not

Any less the black man who
Bit my pretty net worth in two.
I was forty-six when they buried you.
When I'm eighty–barista–it's true.

Here's a stake in your smug bloated heart,
And your flawed Dismal Science, too.
Greenspan, Greenspan, you bastard, I'm through.

Ha! whaur ye gaun, ye mortgage banker?
Whilst bailouts burgeon like yon canker;
I canna hope but ye strunt rarely,
Owre the populace;
Tho', faith! I fear we'll dine but sparely
Ever after this.

Ye ugly, creepin, blastit butthead,
Detested by both quick and the dead,
How daured ye suck the lifeblood from us–
Sae fine a country?
Tax someone else now, leech your bonus
Off of the gentry.

Swith! may you in sere breadlines stagger;
Bereft of golf clubs, skis and swagger,
Wi' all your kindred, ne'er more swillin'
At Fed and nation's teat;
Plus find you resist penicillin
When e'er The Clap does hit.

O wad some Clout the SEC had
To kick your ass as you deserved!
From greedy blunders' Jihad free as
We're set in motion:
What fears of cold and famine'd lea'e us,
And need for K-Y lotion!

A 401K is a joy for ever:
Or so we thought–that it would never
Pass into nothingness; and would have bred
A condo just for us, or unwet beds
In some nursing home (where no false teeth get stolen).
But now, on every morrow, needs must embolden
Our toils–regain the promise of a senile berth,
Spite of despondence, and the inhuman dearth
Of compound interest on whate'er we'll yet squirrel away.
We'll fear the unhealthy and o`er-darkened day
That caps our earning years: yet, inspite of all,
Some fierce courage burns away the gall
From all the worth those bastards squandered.

April is the cruelest month–this year
Especially. Gleaning IRS tithes from this fallow harvest,
Memory and desire stirring
Our dull bowls of rice and beans.
Winter kept us numb, cloaking
Hubris in forgetful snow as we stoked
Weak embers with the dry grass of regret.
Summer may yet surprise us, spilling over the Dow's transom
With a shower of gold; we'll stop in the colonnade,
And go on in sunlight, into the Hofgarten,
Amazed we can afford lattes again,
Grateful Hitler was no Lazarus.

He fucked us good, that Paulson lad.
Might not have meant to, but he did.
He weighed us down with debt banks had
And added extra, for the kids.

The Fed was fucked to cut those rates
For wolves in old-style banker's coats,
Who half the time were reprobates
And half at one another's throats.

Man hands on misery to man.
It deepens like a coastal shelf.
Get out as early as you can,
And don't accrue more debt yourself.

I thought that I should never see
A bank as stupid as a tree.

A tree with hungry mouth still prest
Against this client's emptied breast;

A tree that plays at God all year,
Then shrugs its boughs when checks don't clear;

I hope Wells Fargo soon will wear
A crown of birdshit on its hair;

Poems are made by fools like me–
No doubt my bank will charge a fee.

Got any monetary verse of your own? Let 'er rip…

15 thoughts on “Doggerel is Mine, Saith the Cornelia”