I’m promoting your shelf this week.  Your bookshelf, that is.  I’m suggesting that it might look a lot better with one of THESE on it… 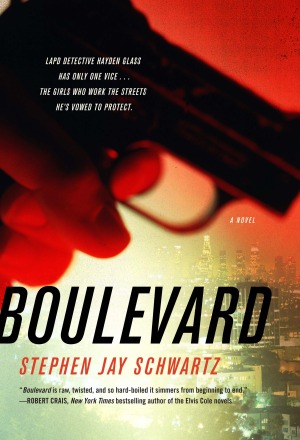 Here’s what people are saying about BOULEVARD…

“Schwartz hasn’t missed a trick in this gripping first novel. He begins with a knowing guided tour of LA’s boulevards, i.e., “hooker strolls,” as seen by the cop/customer, and he skillfully develops Hayden’s flawed character, showing him to be decent, haunted, and sometimes loathsome. Most important, he artfully builds tension and suspense into horror and finishes with a stunning Grand Guignol climax. Expect much more from this talented writer.”

Like James Ellroy, Hollywood film developer Schwartz can make the reader squirm, as shown in his debut, a disturbing thriller whose hero is addicted to sex…Schwartz does a fine job of blurring the lines between sexuality and violence, the criminal world and the police world.

A New Golden Age? The modern mystery is advancing into new territory with unusual sleuths and a mix of genres and moods. Stephen Jay Schwartz’s Boulevard introduces a police detective who is also a sex addict.  Hayden Glass is the top investigator in the LAPD elite Robbery and Homicide Division. He’s also a sex addict. This debut novel revolves around Glass’s addiction and a series of sadistic murders that are aimed specifically at Glass. The murderer leaves clues that Glass puts together but that others miss mainly because few know about his addiction. Working with Kennedy Reynard, a former FBI profiler, he slowly tracks the killer. VERDICT: Plot twists and turns plus an unusual denouement make Schwartz an author to watch. Mystery fans who enjoy reading about the mean streets of L.A. (à la Robert Crais, Michael Connelly, T. Jefferson Parker) will devour this.

“Boulevard is raw, twisted, and so hard-boiled it simmers from beginning to end.”

“Boulevard is terrific.  Fast-paced and convincingly told. The streets of L.A. have never been meaner or seamier. Stephen Jay Schwartz’s clear vision and knowing heartmake him a gifted writer to watch.”

“BOULEVARD is relentless and unflinching, a shocking thriller that dares you to keep reading. Schwartz has created one of the most complex and tortured protagonists I’ve encountered in a long time.A powerful debut.”

“Tightly written and wildly original, you’ll be thinking about this story long after you close the covers.  Sex-addict Detective Hayden Glass is an unforgettable anti-hero you’ll love and hate at the same time. Stephen Jay Schwartz is going to give Michael Connelly’s Harry Bosch a run for his money.  BOULEVARD is just plain excellent.”

“BOULEVARD is one of the most riveting debuts I have ever read.  Stephen Schwartz has written a story that will enthrall you, haunt you, disturb you, and keep you thinking long after you’ve finished reading it. Once you begin this book you won’t be able to look away.”

“Stephen Jay Schwartz is a brave and gifted author, and Boulevard is an electrifying journey into sinful delights and escalating evil. Morally sound, addictive as a speed-ball, and rich with insight into human frailty-this novel kept me awake and disturbed my dreams in all the right ways.  Lock your doors and read it.”

“Boulevard is a mesmerizing read;  Schwartz has drawn a swift, brutal, and compelling portrait of a nightmare underworld of Los Angeles and a protagonist tormented by his own sexual addiction as well as by a real human evil.  Boulevard is one of the most compelling books on addiction I’ve ever read, wrapped up in a gripping thriller.”

Thank you Murderati authors for your wonderful blurbs!!!

I’m doing a short little book tour, which you can find by visiting

I hope to see everyone at Bouchercon in Indianapolis, October 15-18.

Thanks for allowing me my moment of shameless self-promotion.  I promise it won’t happen again until I’m out in paperback.