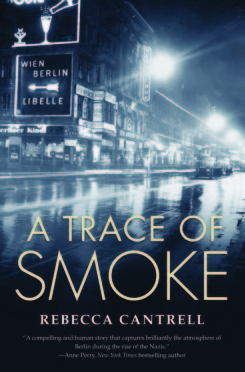 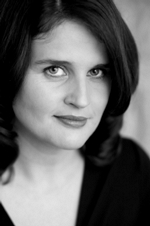 I met the lovely and talented Rebecca Cantrell at last year’s Bouchercon in Indianapolis.  But I’d seen her picture before on the ITW Debut Author’s website and I’d heard wonderful things about her novel, “A Trace of Smoke,” which was nominated for RT Best Historical Mystery of 2009 and the 2009 Bruce Alexander Memorial Award.  It was also listed as one of the Top Ten Novels of 2009 by The Mystery Bookstore’s Bobby McCue.  I picked up my own autographed copy of “Smoke” and read it with relish.

“A Trace of Smoke” is a richly-textured period thriller set in 1930s Berlin during the Nazi rise to power.  Protagonist Hannah Vogel is a journalist investigating the murder of her brother, a renowned homosexual cabaret star who has many admirers.  One, in particular, is a very powerful officer in the Nazi Party.  Cantrell’s lens captures the transition from Berlin’s free, tolerant society as seen in the cabarets, to the xenophobic nightmare of things to come.  The subtle rise of anti-Semitism is seen in every chapter.  And hypocrisy abounds.  Cantrell creates a beautifully visual world with images so specific that I sometimes wonder if I read her book in print or saw it unfold on screen.

Rebecca is on a blog-tour for the paperback edition of “Smoke” and I’m honored to present her to our Murderati gang today.

Rebecca, you’ve developed a striking and unique character in Hannah’s brother Ernst.  Why did you choose to portray an openly homosexual character in the setting of 1930s Berlin?

I wanted to set a book just before the Nazis came to power, and 1931 was the last year I could do so.  Looking back, we know that 1931 was the year that Germany was lost to the Nazis.  But they didn’t at the time.

The late 1920s and early 1930s in Berlin was a time of intellectual and social freedom mixed with grinding poverty and violent protests. Berlin was a center for modern art, cinema, writing, and music. And yet within a few years it would all be gone: the artists fled, in camps, or in hiding. Just like that an incredibly vibrant part of a modern European city vanished to be replaced by the horror of the Nazis. How could such a transition NOT be a fascinating time to set a novel?

Once I had my time, and did my research, I was delighted to find there was such a vibrant gay culture in Berlin. I’ve since read that there were more gay newspapers and magazines in Berlin in 1931 than in New York City in the 1970s. This was lucky, because I knew that Ernst Vogel would be gay, out, and flamboyant.

Who was the first character in your book that came to you and why?

Ernst  was the first character to come to me. In the mid-1980s I went to Dachau for Spring Break (I was weird even as a teenager). I was transfixed by a stark wall with a row of colored triangles worn by actual prisoners: yellow, red, green, blue, purple, pink, brown, and black scraps of fabric. Above each now faded triangle, thick Gothic letters spelled out the categories: Jewish, political prisoner, habitual criminals, emigrant, Jehovah’s Witnesses, homosexuals, gypsies, and asocials (a catchall term used for murderers, thieves, and those who violated the laws prohibiting Aryans from having intercourse with Jews).

Even though I was just a teenager, I’d read enough to know what the Nazis did to the Jews, the Communists, the gypsies, and those who disagreed with their ideology. But I’d had no idea they’d imprisoned people for being gay. At that time I lived with a host family and my host brother was gay, flamboyant, and out. We often went clubbing in Berlin until the wee small hours of the morning. The subways stopped running around midnight, and if you missed that last one, you were out until five unless you caught a night bus. Then you were on the night bus for hours as it wended its way through every tiny street imaginable. Without much adult supervision, my host brother and I spent what in retrospect was probably too many nights leaned up against each other like puppies sleeping on the top front seat of the night bus or on the benches at the subway station.

We would snag a table at Metropol where we would both drink a Berliner white beer (his with a red shot of syrup, mine with a green) and then dance with an endless array of GIs. At the end of the evening, we’d hook back up and start our long journey home, talking about guys. Forty years before those innocent evenings would have been enough to send him to the camps.

That stuck in my mind and all these years later, I wanted to write about the people who lived in that long ago world, and what happened to them.

Hannah Vogel is such a warm and intelligent character.  I found it hard to turn the last page knowing that I wouldn’t be part of her world anymore.  How much of you is in Hannah?

How much of me is in Hannah is a complicated question. I think the truth is: more than I’d like to admit. She has my strong sense of right and wrong and irritating habit of trying to do the right thing, even when it’s inconvenient. On the other hand, I’m not as tough and would probably not be jumping around so soon after being shot, stabbed, and just in general roughed up the way she is. I like to think I’m better at relationships too.

You write Berlin with the authenticity of someone who lived there.  How much time did you spend in Berlin?

I lived in Germany for three years. One year near Dortmund, two in Berlin (West) and six months in Göttingen.

The first year, I asked to be sent to a small rural German town, something similar to my Alaskan home town of Talkeetna (population 250). They sent me to West Berlin, a city of two million people surrounded by a giant wall in the middle of communist Europe.

I fell in love with Berlin: its sights, sounds, tastes, and historical burden. I lived in the cold shadow of the Soviet wall, toughing it out with my gay host brother, sarcastic artists, scrappy old timers, and German draft dodgers. On any given Friday night, more flirting teenagers, guest workers, and GIs danced to Starship’s “We Built this City” in the Kuh-Dorf disco than lived Talkeetna.

I’ve only been back for short visits since, but I think one of these days I’ll be able to stay awhile and see what it’s really like post-Wall.

What drove you to write this story?  What truths did you want to convey?

I set out to tell Hannah’s story in such a way that the reader would be transported there, able to see what she saw and hear what she heard. I wanted to go to places that I had never seen in fiction: Berlin’s vibrant gay subculture, the life of a woman crime reporter living alone, and an imaginative little boy. Hannah is going to some dark places in future books too, as she sees what the rise of Nazism did to the mothers and sons of Germany. I’m hoping that she can go in there, shine a candle around so we can see it, and then bring the stories back out. That’s where the truth lies.

What’s in store for Hannah in the future?

I just finished the rough draft of “A Game of Lies” last night. But first she has to get through the Röhm purge of 1934 (know as the Night of the Long Knives) after she and Anton are zeppelin-jacked back into Germany. There is film interest, so perhaps we’ll get to see her walking across the big screen too.

What’s in store for Rebecca Cantrell in the future?

I’m hoping to get a chance to write the nine Hannah Vogel novels in my head. For now, I have three written and four total contracted. I also have a short story set on a train transferring prisoners from Dachau in the late 1930s called “On the Train” in the “First Thrills” anthology that comes out in June 2010. Plus I have a YA series that I can’t talk about yet, but hopefully next week!

So, Murderati, please join me in welcoming Rebecca to our enclave, and make her feel at home!  To read more about Rebecca and her adventures in the writing trade, check out her website at http://www.rebeccacantrell.com.