One of the things that we love to do here at Murderati is showcase fellow writers whose work we admire, who are Good People. I have had the best fortune in meeting so many Good People over the last few years, people who reached a hand out to help me, who graciously gave me some of their time or space on their blog, and did so with a “Pay It Forward” attitude, and so it is with great joy that I get to introduce the Murderati group to a debut author who just impresses the hell out of me: Leanna Renee Hieber.

It’s fantastic when you meet a new author and you think, “Wow, this is such a fun person to hang out with,” and then you read her work and think, “Geez, and she’s so delightfully twisted, and talented!” This incredibly beautiful woman writes about everyone’s favorite serial killer, Jack the Ripper, in The Strangely Beautiful Tale of Miss Percy Parker. With a ghostly twist:

What fortune awaited sweet, timid Percy Parker at Athens Academy? Hidden in the dark heart of Victorian London, the Romanesque school was dreadfully imposing, a veritable fortress, and little could Percy guess what lay inside. She had never met its powerful and mysterious Professor Alexi Rychman, knew nothing of the growing shadows, of the Ripper and other supernatural terrors against which his coterie stood guard. She saw simply that she was different, haunted, with her snow white hair, pearlescent skin and uncanny gift. This arched stone doorway was a portal to a new life, to an education far from what could be had at a convent—and it was an invitation to an intimate yet dangerous dance at the threshold of life and death… 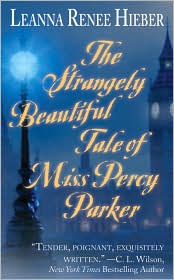 I met Leanna about a year-and-a-half ago at RT, when she was helping director Morgan Doremus create video interviews of various authors in attendance. They had me laughing within minutes, completely forgetting my phobia of being in front of the camera (I am used to being behind it), and they made the experience enormously fun. (If you were to see the videos, I look like I’m constantly about to laugh. I am so freaking thankful Morgan didn’t do a series of outtakes of all the faces I made at them, or the time we all doubled over in laughter and one of us who shall remain nameless fell off the stool.) (Also, I did not realize my bangs had completely consumed my face. That was pre-Lasik and I was, apparently, legally blind. That’s my story and I’m sticking to it.)

I recently interviewed Leanna because I love her work, think she’s a fantastic new writer and thought her journey would inspire.

So let’s just get an overview of your tastes as a writer… if you were to go to that Great Coffee Shop in the Sky, who do you want to meet most?

C.S. Lewis, Tolkein and the entire 19th century canon of Gothic writers. I can’t pick one, I’ve folded my adoration for each and every one of them into my muse. The whole Pre-Raphaelite Brotherhood too—and their coterie – this means you, Christina Georgina Rosetti…

Writers always like peeking in on other writer’s writing rituals… we’re nosy creatures, after all. What’s yours?

I don’t always have this luxury but this is my best-case writing scenario as I’m working on the Strangely Beautiful series: While showering I’ll shift my thoughts into longer sentences with British accents. Then I’ll put on music (piano music, Phillip Glass soundtracks or 19th century classical composers) and light at least one of my two stained-glass lamps. Preferably a candle is lit. Must prepare and sip a cup of clove tea: the precise scent of my Professor hero. Wow, I guess I’m like I’m the method actor of writing books…

Along the way from first words onto the page through to publication, writers face rejection. Tell us a little bit about your journey and what your favorite rejection story would be.

I started my first novel somewhere around the age of 12. Ray Bradbury once said “Write 1,000 pages, bury it in the ground and you can become a writer.” I chose a fireplace instead. There are a few things about me that will make it obvious as to why Strangely Beautiful is my break out series. I can hardly remember not writing, not loving ghost stories, or not being weirdly obsessed with Europe in the 19th century.

Come September it will be about nine years from the moment young Miss Percy Parker waltzed through a wall much like a ghost, into my mind, and I couldn’t sleep or stop thinking about her. She couldn’t have had worse timing, I was working often 14 hour days with the Cincinnati Shakespeare Company. We’d be on the road touring Julius Caesar or Midsummer Night’s Dream to some sleepy high-school class and I’d be in the company van scribbling away like a madman. I was surrounded by wonderful ideas, artists, and so much great theatre that I couldn’t help but channel that energy into the first draft of the book, giving it some legs that none of my previous works had. It also gives it a bit of a dramatic flair and sparkle that those who know me quite recognize as a personal touch. But from those first scribbled notes, it was a long road ahead…

Percy, Alexi and The Guard were there all the while, waiting in my wings as I hopped around the professional theatre circuit, my favourite friends to come home to. I moved to New York with the hope that I’d figure out which passion should come first, theatre or books. I was at a Broadway callback and all I could think about was Percy. That was that. Thanks to dear writer friend Isabo Kelly I’d already joined the very-helpful RWA NYC chapter and threw myself into networking, got an Agent, met other helping hands like Marianne Mancusi and eventually one of the best in the business, editor Chris Keeslar, and Dorchester became the perfect house for a cross-genre work like mine.

Favourite rejection? After considering Strangely Beautiful, set in 1888, one editor rejected saying “It’s a little too Victorian.” That still makes me smile fondly.

I love that. Your book is very cross-genre. (I know the feeling.) What does that mean to you?

Allison Brennan wrote a great post on this topic here a little while ago. Branding is very important to an author, and to a reader. We want to make sure the right books go into the right hands. It can be very limiting to an author, however, when only one word is applied to a work of fiction. I hope that fantasy, historical, Gothic and romance fans (as well as those who enjoy blends of light horror, suspense and mystery) will find my book because I feel all will find a part of their respective favourite genre represented in the ways appropriate to the narrative. It’s hard to appeal to a whole fan base and yet I wouldn’t do without the genre label. The spine of my book says Historical Fantasy and I think that’s about right. The wonderful thing about the word “Fantasy” is that it is an open and over-arching word, and often Fantasy incorporates a romantic through line at the center of its questing adventures. A descriptive title and a cover that exactly fits the story really helps.

It took a long time for a marketing department to take a chance on this book. As I’d said, it was a 9 year journey from idea to bookshelf, and several of those years were spent with marketing departments and editors saying “this is really good, but it’s too much of this– or not enough this…”

Well, thank goodness someone took a chance, because this is a unique world which deals with crime fiction and fantasy and horror in a way I found wholly fascinating and original! Tell me, what sort of promotional things are you doing as a debut author?

1. August 22nd I kick off my Haunted London Blog Tour at the Bradford Bunch. The tour hops various blogs until September. Each day I’ll tell a different ghost story. Many spirits “Ghost-star” in my book, each of them a documented London haunt. They don’t get their full due in the book, as they’re quite familiar to my Guard of spectral police, but their tales are too fun not to tell– like telling spooky stories around a roving campfire. Each day I’ll give away a signed book. Schedule can be found here: http://www.leannareneehieber.com/haunted-london-blog-tour-book-giveaway/

2. The morning of Release Day, August 25th I’ll kick off a Virtual release party at www.RomanceNovel.tv, my video interview will go live and we’ll do a bit of a chat/book giveaway.

4. Running a contest on my website, a 3 question quiz about the Shakespeare references in my book, starting Release Day, 8/25 and running for the next three weeks. Winner has a choice of either a replica of the Phoenix pendant Percy wears in the book, or a gift certificate. The second name drawn receives the second item. Details: http://www.leannareneehieber.com/contest/

Thanks, Leanna, for letting me bug ya with questions. And now in the spirt of all writers who have had rejections, I’ll refer back to that previous question and share one of mine. Someone who read the first book in the Bobbie Faye series sent me an email that he thought it was funny as hell, extremely well written, and he absolutely “hated that woman” and “didn’t want to spend another minute with her. Ever.” That just completely cracked me up, and I loved it, because it was an honest response and a personal one. I respected that he just did not like tough female characters, but the books ended up selling the next week, which took the sting out of the rejection. I’m sure I’ve had worse, but I still think about that one and smile. No one is ever going to love everything (nor should they) and everyone isn’t going to love one single thing, all of us at the same time (nor should we), and as new writers, we need to remember that. And write with our passion.

So how about you, ‘Rati? What’s the best rejection you’ve ever gotten (and it can be something you realized in hindsight, something that ended up being a Good Thing.) Doesn’t have to be about writing… let’s hear it.

And as a bonus, all commenters are eligible for a free copy of Leanna’s book, THE STRANGELY BEAUTIFUL TALE OF MISS PERCY PARKER as well as a signed copy of my first in the Bobbie Faye series, CHARMED AND DANGEROUS. (Contest runs ’til midnight, Pacific Time, tonight — Sunday. Winner announced here on the blog after that.)

29 thoughts on “A new writer’s journey…”