Normally, here at Murderati, we don’t have guest posts. However, this guest is an alum  — though you’ll have to guess who he or she might be — and I’m delighted to see this author’s work on our pages again. ‘Nuf said.
Enjoy,
Pari 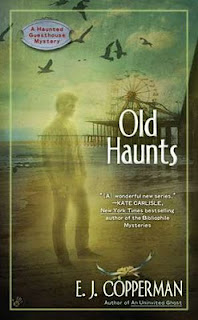 Let’s get it out of the way up top and then move on: I have a new book coming tomorrow . . . that’s Feb. 7. It’s called OLD HAUNTS. I think it’s good, others have agreed, and I’d appreciate it if you’d give it a look.

Okay. now we can get down to business.

The film version of Janet Evanovich’s ONE FOR THE MONEY was released recently, setting off the traditional brouhaha among mystery and crime fiction fans about who was cast, who SHOULD have been cast, and why Evanovich would ever have allowed such a thing as (fill in your own personal outrage) to happen.

At roughly the same moment, filming was continuing on ONE SHOT, the first adaptation of a Lee Child novel featuring the mega-popular character Jack Reacher. The film is due into theaters on February 8, 2013 (which, I might note, is exactly one year and one day after the release of a certain book that means a lot to me, but that’s beside the point.) And once again, there has been apoplexy (Paramount has had the audacity to cast an actor in the role who is–brace yourself–short). The fact that the actor is also the producer is apparently irrelevant to the height-ists among us.

Personally, I find it hilarious that people think the author has even 1% of authority over who is cast in, writes, produces, directs, or provides craft services on a film made from one of his/her books. Should a producer show interest in one of my novels–and if you’re a producer, have your people call my people (hang on: I AM my people)–I will be tickled with the idea and expect that they’ll send me, perhaps, an autographed poster a couple of weeks after the movie makes its debut on DVD and Blu-Ray.

The fact is, an author has one choice, and only one, when a producer offers money to option/buy the rights to a book: To take the money, or not. That’s it. If you take the money, you’ve SOLD the rights. That means someone else owns them. And they can do with your work as they please.

Look at it this way: You decide to sell your car. You put an ad on Craigslist, and someone responds. You negotiate a price that you and the buyer can agree upon. So they give you a check, and you give them the title, and the transaction is done.

The next day, the new owner drives by your house. He has had the car painted orange with pink polka dots, and removed your $2000 sound systems in favor of two tin cans and a string.

You have no recourse. You sold it. That’s it.

So if you have trouble with Debbie Reynolds playing Granda Masur or Tom Cruise standing on a box to be Reacher, you can choose to read the books and avoid the movie. Or you can blame the producer, the director, the studio or the casting director.

But don’t get mad at the author. He or she is writing a new book for you right now.

E.J. Copperman is the author of the Haunted Guesthouse mystery series, in which a divorced mom moves to her Jersey Shore hometown to open a guesthouse and finds two ghosts there. So far, the titles have included NIGHT OF THE LIVING DEED, AN UNINVITED GHOST and now OLD HAUNTS. E.J.’s last name is not “Cooperman.” In case anyone asks.