(Everyone, sorry for the late post today. I keyed it in yesterday, but today it was gone so I keyed it in again! Please don't let tardiness keep you from welcoming Cara Black back to Murderati!
–see you next week, Pari.)

At the San Francisco Writers Conference a few weeks ago a woman picked up my book and said, "You wrote this?" Actually it was more of an accusation.

"Guilty." I smiled, eyeing the coffee urn behind the book display.

"You wrote all of these books with murder?"

Nonplussed for a moment, I didn't have a short answer on the tip of my tongue or even a long one for that matter. It knocked me for a loop. I was not caffeinated, it was too early in the morning and I definitely needed that coffee. Before I could say, "Well, I write about Paris, too." She slapped my book down, frowned and moved away from me like "eeeuw!"

Did I have cooties?

Clare Langley-Hawthorne's books were next to mine and her books deal with murder and several other mysteries were on the table. I mean this was a writing conference, there were workshops on writing mysteries! But I felt a foot small and snakes of insecurity wound in my head.

True, sometimes I do spend part of my day here. But this woman's behavior flashed me right back to my first ever book signing for Murder in the Marais, my first book ever — ten years ago. Before my bookstore event not only was I shaking but I felt about to throw up. I'd spent three and a half years writing this book and now I had to get up and talk about it? Could I really call myself a writer with this one book? What if people pointed, shouted "Imposter" and ran out of the bookstore?

And I wasn't French but my book took place in Paris with French people. I pictured someone saying, "How can you write about Paris? What do you know, you can't even tie your scarf like a French woman and so on."

I'd say, "Well I know I'm not French and their chic is not about having the perfect little black dress, red lipsticks, nor even the perfect red scarf. French chic at its core is an attitude, more elusive than the perfect pump.

Well, I had that memorized but the queasiness didn't go away. Yet here I was at my local bookstore four blocks from my house, there was a room of my closest friends, all my family, my mother, and Tracey my local indie bookseller who kept hugging me and saying, "You go girl . . . now get up there and talk."

It was my best friend who took me aside and said, "Look, just tell them what you told me for years about why you had to write this story . . . be yourself, you can't be anyone else. Good God we all know you and how dirty your kitchen is tonight."

I took her words to heart. And after all, no one would throw rocks with my mom and young son sitting right there, or so I hoped. Here was my chance to give vent to the passion that propelled me to write this story and what it meant, to bring people into the fictive world that I hoped I'd created. I remember I thanked everyone for coming, thanked my bookseller, read a few pages and  then just started telling the story of where this book came from. And what I had to write what had been gnawing at me for years based on the true story of my Parisian friend's mother who'd been a hidden Jewish girl during the German Occupation of Paris in WWII.

Then it was time for a Q & A . . . that went fine too. I mean everyone asked me questions about things I hadn't mentioned or had forgotten to say and I hadn't even paid them. I'd taken a breath reading for the last question when a woman stared then pointed at me.

"Why would someone like you, a normal looking person who I've seen in the sandbox at the park with your son, write about ugliness, sordidness, murder?" she said. My jaw dropped. "Your book sounds too dark for me." She shrugged, started to stand.

Well that was a show stopper. I just gulped and stood there speechless, dying, my mind a blank. Then Betsy, a mother in my son's fourth grade class, turned around in her seat, fixed the woman with a look and said, "I'm a district attorney and lady, my real work is uglier than this. I meet murderers, rapists and work with them every day. But hell, I don't get to do it in Paris and this book is much more than just about murder, it's a human story. I loved it and still can't believe she wrote this. You don't know how many field trips she's driven on . . . but if you don't read this book I'm sorry for you."

The woman left after that and didn't buy the book. Fair enough. It wasn't going to be to her taste. But I wanted to take Betsy with me to every bookstore I went after that. It really meant so much because Betsy doesn't BS. . . . she could have turned around and said, "Lady, I agree with you."

But it taught me something. Something I'd forgotten until confronted by the woman at the SF Writers Conference. How do you handle the wonder in people's faced when they see a "normal personwho seems nice and smiles" who explores a dark side of human nature in murder mysteries or crime fiction? Maybe the writer's face doesn't match the contents of what's written, but does it matter? There's a wonderful quote by Margaret Atwood concerning wanting to know writers: "Just because you like pate doesn't mean you want to know the duck."

I've always remembered what PD James said; her detective novels are just a structure, a framework to hand a story. It's about the characters, the sense of place, the history of that created world, the relationships that go south, events that go haywire and obstacle after obstacle.

I don't think much about the deep meanings and why and wherefores of this genre that allows writers and readers to explore the dark side, the incomfortable things. Well for one I'm sitting safely at my laptop writing, or reading in bed with my dog at my feet and the cover pulled tight. It's a ride to uncharted territories that pulls me right in, engrosses me and makes me turn the page. And then the next. People say a crime novel should mirror life and the untidiness, the loose threads, the bleakness. People say a lot of things. I just know that what I write, and the books I love to read, offer some form of resolution, a kind of justice that probably you, me, and the underdog can't always get in real life.

But I'm keeping what that woman said in mind as I begin the tour for my ninth book, Murder in the Latin Quarter. "Always prepare," someone said, "and get ready for a curve ball."

Do I still get that queasiness in the pit of my stomach, feel like an imposter when I get up to talk at a bookstore or library? You bet. But it lasts a few seconds now.

I'll try to remember what Sir Lawrence Olivier said when asked about his great performances, his technique for preparing before the stage, if there was anything he did ie voice modulation, exercises before curtain time. He laughed. "I'm just trying to breathe and not throw up."

Well I'm not inthe same field or class as Sir Larry but I take his words to heart.

I'd love to hear about your first time — your first event in a bookstore or in front of a roomful of people. What's your story? Any pearls of wisdom to share?

Cara Black writes the bestselling and award nominated Aimee Leduc Investigations set in Paris. Murder in the Latin Quarter, the ninth in her series, received a starred Kirkus review and is an Indie Next Pick for April. Murder in the Latin Quarter just hit the bookstores. Look for her on tour all over like a cheap suit at www.carablack.com at events.

19 thoughts on “You never forget the first time”

Looking for a Back-to-Basics Cookbook? Our Community Recommends These 5. https://t.co/A297w6Kzef 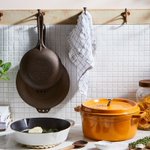