I’m not particularly sociable today. If I had my way I would have stayed in bed. All day. Curled into a ball.

I’m writing through a particular madness. It’s had me for a few days now. I feel like I’m floating through a numb dumbness, answering questions when asked, nodding appropriately, making eye contact when necessary. I’m dodging decisions and putting off the things that should be done today but can wait until tomorrow or the week after.

I’m absolutely no help to anyone, except when I look directly at my wife and children and tell them I love them. With watering eyes. I’m as sensitive as a bee sting. I don’t trust myself to watch commercials because I know I’m easily manipulated by images of babies and puppies.

I have to be aware of when I get like this. I have to watch for the signs. The shortness of breath, the thousand-yard stare, the anxiety. I can pull the shit together if I have a story meeting or an interview or if I’m on a panel. I just compartmentalize the crazy and go with what I imagine appears normal. This is complicated by the fact that I know that normal doesn’t really exist.

Watching babies and petting dogs helps. Maybe that’s why I write at cafes. I see a lot of babies, I pet a lot of dogs.

I suppose I feel too much. I remember my mother telling me when I was in high school that I was too sensitive. This was when I was supposed to testify against my father in court for not coming through on sending me to college, as he had promised in my parent’s divorce settlement three years before. I guess that whole thing must’ve made me just a little bit…sensitive.

I often feel shame for feeling too much, when I know that others deal with a kind of pain I’ve never encountered. The pain of war, of losing a child, of homelessness and absolute poverty. The pain of hunger. There are so many things that bring a person down.

One cannot discount one’s own pain, however. We cannot assign a point system to compare our pain against another’s.

I’m a “day later” kind of guy, when it comes to shock. It hits me the next day. And then it lasts, well, as long as it lasts. I’m having a hard time writing through this one.

My wife tells me the moment of impact was Monday night, when my thirteen year old son had an earthquake-sized meltdown. He has Aspergers Syndrome and the worst case of OCD the specialists have ever seen. My wife and I have been fighting the special needs battle for seven years now. But Monday night was a watershed moment, because I was forced to face my helplessness in this battle. I came away from it knowing we’d be looking for a respectable, affordable outpatient or residential program somewhere that can provide my son with the tools he needs to live in this world. And, while that realization marks a positive step in my evolution as a caring parent, it also scares the hell out of me and makes me feel, somewhere deep inside, that I’ve failed. I think I’m smart enough to know that I’m stupid to make this about me. And, intellectually, I know that this does not represent my failure as a parent. But intellect and emotion don’t always agree.

I think I’m just scared. I want my son to be whole. He’s sweet and caring and unique and smart and oh-such a character. I want to see the best of him encouraged. I don’t want madness to envelop him.

Then Wednesday morning my wife’s father died. He was in the hospital and I wanted to visit him and I didn’t. Theirs was a complicated relationship, so it brings up complicated emotions for her. He was almost 90 years old – a man from a different era. He was a professional jazz pianist and composer, and he also painted and wrote short stories. He had given up writing decades ago, but his early short stories were published in an O’Henry collection. I read them and was blown away. I was going to ask him if I could publish them as ebooks. That’s what I was going to ask him, when I was going to visit him in the hospital, when I didn’t.

I spent the day yesterday with my boys while my wife was with her mother. We visited the university where I graduated from film school and I tracked down John Schultheiss, my old film criticism teacher, a man whose influence on my writing and film making cannot be over-sold. I hadn’t seen him in over twenty years. Me and the boys sat in the back of the lecture hall as he administered a final exam, and I was thankful as hell that I would never have to take another one of his tests again. Ultimately, we came face to face and I went all fan-boy. It was great, but it was sad, too. Because time ravages us. And my mentor has aged. I’m sensitive, remember. I’ve also been told that I’m nostalgic and sentimental. How the hell did I ever end up writing noir? It might have had a little to do with John Schultheiss, who taught me and Brett Battles the elements of film noir.

I was also babbling like a groupie, with mile-a-minute recollections of every wise word he had imparted, and how and where I’ve taken his advice into my own worlds of writing and film. I was like a silly teenager. Only later did I realize this was the trauma talking. Like I said, I have to watch myself when I get this way.

Maybe writing will bring me out of this funk. Like therapy, writing turns us inward. And, if we’re honest with our emotions, we’ll teach ourselves a thing or two.

I think this is why I’m struggling so much with my third novel. I don’t want it to just be a fun ride. Boulevard and Beat explore the world of sex addiction. I feel like they had something to say. I’m searching for what needs to be said in my third book. I’m trying to connect with what is true and human and honest. I’m turning inward, which is the only way I know how to do this shit. But it’s painful and I just want to zone out. I want to stay in bed. All day. Curled into a ball. I don’t want to face the hard stuff, and yet I know I’ll have nothing to write about if I don’t.

39 thoughts on “Writing Through The Madness”

@weshjazz @kosherhotdogz I was tempted, but then I thought, 'nah'. 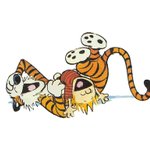 @ThePubliusUSA Because a trial risks exposing his complicity in the terrorist attack.