Sadly, it’s happened again.  Another memoir, another embarrassed publisher.  Greg Mortenson, author of the mega-bestselling Three Cups of Tea, about his humanitarian efforts to build schools in Afghanistan and Pakistan, has been accused of fabricating key elements in his book.  He’s also accused of misusing the donations to his charity, the Central Asia Institute, but it’s the book that I want to focus on. Because the writer who dreams up a dodgy memoir is such an old tale, I’m surprised that anyone’s surprised that another one has popped up.

Mortenson in particular has been on my radar for a while because all my close friends have raved about him.  “He’s a saint, you must read his book!” they insisted, shoving the book at me.  By the time the tenth person said that, I was irritated about the whole thing and never did read the book.  Then, while I was in Dubai, I saw that Mortenson was one of the featured authors on the program.  I tried to get into the session — held in a huge auditorium — but the place was packed so tight you could scarcely breathe.  My brief impression of him, before I fled the overheated room, was that he was an immensely polished speaker who knew exactly how to work an audience.  He had legions of adoring fans.  I remember saying to my husband: “He reminds me of a fake TV evangelist.”

Maybe it was just the cynic in me.  Maybe I was a wee bit jealous of the piles and piles of books he was selling at the festival.  But now, a few months later, it turns out I may not have been so far off the mark.

It’s not the first time I got a whiff of uneasiness about a memoir writer.  Some years ago, while waiting to go on the air at BBC in London, I was introduced to a writer named Norma Khouri who was scheduled to go on the air right after me.  “Norma grew up in Jordan,” her publicist told me.  Norma was getting a huge amount of press for her memoir Forbidden Love, about the horrendous honor killing of her best friend in Jordan.  Norma was gorgeous, poised, and well-spoken.  She also struck me as completely American. “Wow,” I told her.  “Your English sounds like you grew up in the US!”

“In my school in Jordan, the teacher who taught us English was from the US,” Norma explained without an instant’s hesitation.  “That’s why I sound American.”

It sounded plausible.  Sort of.  But I couldn’t get over the fact she just seemed so American.  I think I even said that to my publicist.  “She’s just like a gal from Brooklyn,” I said.

Fast-forward a few months, to the breaking news about memoir writer, Norma Khouri.  Who, it turns out, had not grown up in Jordan, but in Chicago.  (If you get a chance, watch the superb documentary Forbidden Lie$, about Norma and her astonishing fabrications.)  As I’d guessed earlier, she was American, and I had detected that fact within a few sentences of talking to her.  Yet for several years she’d managed to fool publishers, critics,  journalists, and a gullible reading public. Part of the reason the fraud went on so long is that Norma was passionate about defending herself and skillful at covering up her inconsistencies.   For every question, she had a ready answer.  I think back to how quickly she responded to my observation that she sounded American, and how willing I was to believe her.

It didn’t occur to me that anyone would lie about such a thing.  Or that anyone would be brazen enough to fake a story that any journalist, with just a few phone calls, could easily blast to smithereens.  Yet it happens again and again. James Frey.  Margaret Selzer.  Forrest Carter.  Every few years, there’s another fake memoir. And every time the truth is finally revealed, readers are outraged, publishers duck their heads in embarrassment, and everyone asks, “How could this happen?”

And it happens because there’s loads of money involved, money handed over by gullible readers who think they’re buying a thrilling true story of a man’s saintly deeds or a young girl’s survival on the streets.  Many of these readers would turn up their literary noses at a mere novel.  No made-up stuff for them; they want to be inspired by the truth. They want to enrich their minds with history. They’re above reading something as trivial as fiction.

How ironic that they were reading fiction after all.

28 thoughts on “Writers who lie” 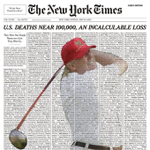 @Tuphlos Off.
The.
Rails.
#horrible