(note: I’m traveling right now, promoting ICE COLD and “Rizzoli & Isles,” so apologies for the short blog post.  I won’t be able to respond to comments, but trust me, I will be checking them when I get home in two weeks.)

All you writers reading this have no doubt stared in frustration at the book reviews page of major newspapers and wondered why your title isn’t included in the latest roundup of novels.  John Q. Stuckup’s latest literary novel about  the usual (yawn) white-male-midlife-and-bad-marriage-crisis will eat up a zillion column inches.  So will the review of Jane Babyface’s debut memoir about her angst-filled days as a barista/ hooker.  But your novel? The wham-bam thriller that will probably find twice the audience as Mr. Stuckup’s or Ms. Babyface’s?  It’s nowhere to be found in any newspaper review pages.  Yes, it may have been dutifully reviewed in Publishers Weekly and Booklist and that perennial good friend to authors, Romantic Times.  But good luck finding it mentioned in the New York Times or the Washington Post.  Or, for that matter, in any major big-city newspaper.

It’s no doubt a sore point for many genre authors.  After all, we’re the engine that drives publishing, the creators of the product that the public actually wants to read.  But where are the reviews of thrillers, romances and science fiction in newspaper review pages?  Are we being discriminated against?

Or maybe the reason is this: 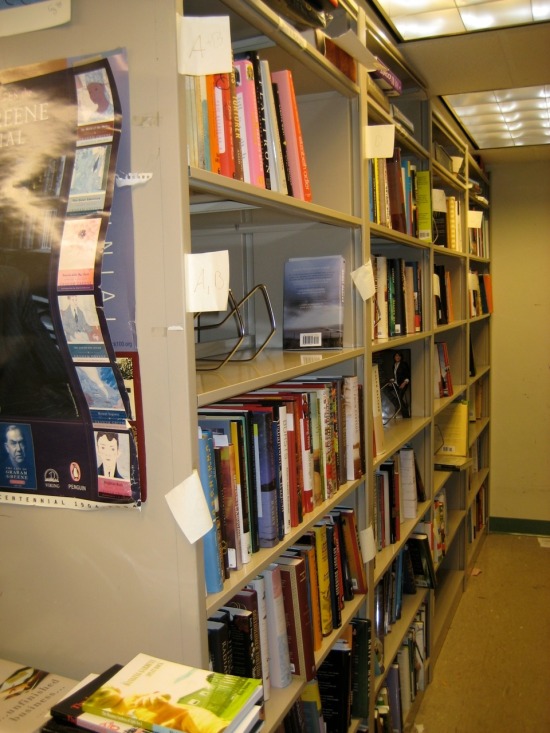 You are looking at the July fiction reviews bookshelf of the Philadelphia Inquirer.  These are the galleys that the Inquirer is considering for reviews during the month of July.  Mnd you, this is only the fiction section; the nonfiction section has a cabinet with just as many galleys waiting for review.  This is only for the month of July, and these are the survivors after a severe winnowing down of all the galleys the newspaper received for this month.

I had the chance to visit the Inquirer building during my recent trip to Philly, and journalist Michael Klein was kind enough to give me a tour of the newsroom.  (Get a load of the messy desks — they look like mine!) 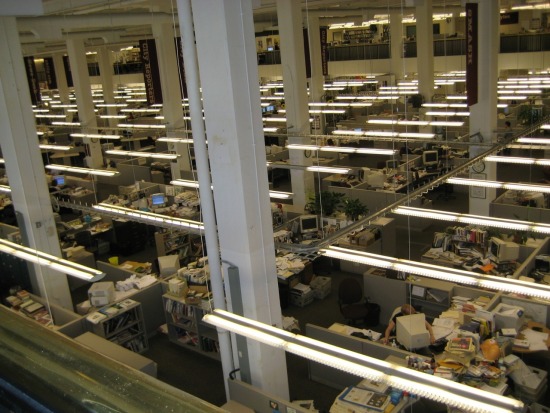 Klein pointed out bins and bins of discarded galleys which had already been rejected.  He also told me that, every week, the Inquirer receives about two hundred galleys for review. That’s eight hundred a month.

If yours is one of them, good luck getting noticed, much less reviewed.  The chances are, it got chucked into one of those recycle bins.

With that many galleys flooding the newspaper, reviewers have to make tough choices.  Big debut novels, of course, get special notice.  So do books by high-profile or celebrity authors such as Glen Beck or Sarah Palin.  But for those of us who reliably hone our craft year after year?  We have to fight for every column inch of attention.

My visit to the Inquirer was a sobering look at how tough newspapers have it these days, trying to keep up with all they have to cover.  Every author wants attention, but one look at the piles of discarded galleys reminded me of just how hard it is to be noticed when you’re fighting for attention along with two hundred other books.  Every single week.