I’m struggling with point of view this week… and realistically I can look forward (!!!) to struggling with it for the rest of the writing of THE TRAVELLER’S TALE, since the POV is so intricate with this one that I have half decided to just bash it out any way I can think of for the first draft just to get the story down, and then start assigning POV in the next pass.

I think writers in general are fairly obsessed with point of view.   Like dreamers (meaning, people literally in the state of dreaming) we are promiscuous about jumping from one POV to another because we have to play all the characters in anything we write.

Kristy Kiernan has a great blog  over on THE DEBUTANTE BALL this week about her first experience of that kind of real-life POV shift.

I have this sneaking suspicion that those are the moments that make us writers – those moments that we completely leave ourselves and inhabit another human being.

Example.  Some musician friends of mine live in this great, appalling house – you know the kind of party house I’m talking about – they’re musicians. There’s a basement with a full bar and a sound studio and all kinds of decadence going on at all hours. The couches in the living room are like enormous Venus Flytraps – people come over for a party and wake up three days later and still have no inclination to leave – and they don’t have to, because no one will mind, it’s all part of the flow.

Their house is the one blot in a very, very PROPER neighborhood.

And right next door to them is a very New England brick structure. SO well tended. Very nice family. Very nice.

Okay, so it’s party season, and this one day not so long ago I stumble out of the House of the Rising Sun at four in the afternoon on the way to some kind of caffeine… God only knows what I was wearing… and here are this very proper father and his maybe eight-year old son oh-so-diligently raking fall leaves off their lawn.

And this little boy looks at me.

Well, so does the father.

And I’m suddenly outside of my own body and inside that little boy, looking at me.   And okay, yeah, also inside the father.

And I suppose I keep moving, because I REALLY REALLY need coffee, but I’m not aware of it.  The synapses are firing and the questions are popping.

What the HELL is it like to live next door to a house like that, with longhaired great-armed boys toting guitars and cases of just about anything and marginally-dressed women going in and out at all hours, when you’re trying to be an upstanding citizen?  And more importantly, whose POV do you tell this story from? Is it a mid-life crisis in the making, or a coming-of-age story, or both? And what about the wife?  Who is she? What does she think about all these sexy Dionysian boys living right next door, when THAT’s her husband?  How long before one or all of these people snap?

These are the kinds of things that keep writers up at night.

There are stories, and then there’s the whole other issue of Whose Story Is It?

And just when you think you’ve got one of them down, the other one becomes the real issue.

So these are my questions for all you all (I have not been in the South long enough to be able to say “all y’all” with any kind of authority, and to be perfectly honest, I’m not sure I’ll ever get there).

In your own writing, do you favor a certain POV: first person, third person, close third, omniscient?  And as readers, do you have a preference?   And what, in your opinion, are some great multiple POV books?  (especially on the dark suspense side… )

Because I could use some help on this one, for sure.

@frankdpi If some Trumpsucker tries to block my access to the polls, get your cameras out, because some shit is about to go viral. 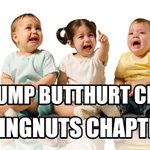 @abigailmarone To destroy the country? You're absolutely right.

Don’t take the bait, y’all. The President of this amazing country clearly went there to frustrate us into forsaking our most precious right to vote. We all have one job: MAKE A PLAN TO VOTE!

We’ve just witnessed a debate so historically toxic that some folks may be so turned off all they can say is “to hell with it.” But don’t take that bait. You have the power because you have the vote.