I have a new book out this week, The Shifters, which makes my third this year, if you count my non-fiction Screenwriting Tricks workbook, which has been selling really well on Amazon – maybe everyone should be paying a whole lot more attention to Joe Konrath than they already are.

So I guess the year wasn’t the complete and total black hole it felt like as I was living through it.   Things got done, even if I can’t exactly remember how that was or even how it could have been, under the circumstances.

I think maybe this book was a bit more of an out of body experience than usual because, yes, I went over to the dark side, that is, the not-as-dark-as-my-usual-dark-side side, of paranormal romance.   Which I am hoping the discerning reader will be able to discern from the cover, which indeed, has one of those alpha males on the cover.   Truth in advertising, people. 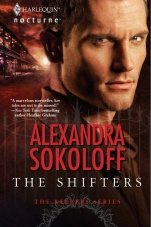 Despite challenges, like having to write a love plot that actually ends well, this has been a fun thing in every way.   I am constantly urging new writers to go to the conferences and workshops because Good Things Happen there – whether it’s getting the inspiration for the next book or getting a great agent or getting a great feature article in a great magazine or  – even – having friends ask you to write a book with them.

In this case the phenomenal, and I mean phenomenal, Heather Graham, author of I think around 175 books now, all with her distinctive blend of paranormal romance, thriller, and traditional mystery,  asked me if I’d be interested in writing a book for a trilogy that she’d be headlining for Harlequin Nocturne.   For the record, there is no possible answer to  a question like that but “When do I start?”

And I have developed an interesting dilemma.   I have a growing contingent of readers who want to read me but who are too scared to read my books.    (If there is such a thing as doing a job too well, I guess I’ve achieved it).    So this was a chance to write something that the people I meet at the romance cons, and at a lot of workshops that I teach, can actually read.   And then of course maybe, just maybe, they’d go a little further and read one of the others…

I’ve been very interested in Nocturne’s business model, which seems to be mostly about developing trilogies:  either three interconnected books by three different authors, or three interconnected books by the same author, that are generally released quickly, one per month for three months, to build maximum momentum for the series.   (All of us know how well that worked for Our Allison as a debut author.)

And our third author is Deborah LeBlanc, another horror writer (President of the Horror Writers of America, in fact) who also sidelines as a paranormal investigator.    So I knew even though a happy ending was required, I could also get pretty dark with these two.

We decided immediately we wanted to write three sisters, and while we were at one of our favorite library events:  Jubilee Jambalaya, in Houma, LA, we were able to sit down and brainstorm out a story.  All great – except when we discovered that even though Nocturne had initially said, “Anything you guys want to write,” in reality that translated to “contemporary setting with vampires or werewolves.”

So it was back to the drawing board at last year’s Bouchercon in Indianapolis, where the three of us sat down in a quiet alcove in the lobby and in a shockingly short time came up with the idea of The Keepers, three sisters with an ancestral duty of keeping the peace between the communities of paranormal beings which hide in plain sight in our mutual favorite city of New Orleans.    This way each sister could have charge of a different set of beings: Heather could write the vampires, as she has done so well before; Deb would write the werewolves, which she’d always wanted to do; and I, the least comfortable with creatures, was assigned the shapeshifters, with whom I have long acquaintance.   Men, mostly….

We decided that each book would focus on a murder within one of the communities, and the Keeper sister of that community would have to team up with a male vampire, werewolf, or shapeshifter from that community to solve the crime before the human population of New Orleans got wind of the murders… and discovered the existence of the paranormal communities.   And that teaming up of course provided the love plot and also the relationship conflict – Keepers aren’t technically supposed to be involved with their charges.

Now, for those of you reeling at the idea of collaborating on interconnected books – remember, I worked in Hollywood and in improvisational theater, so collaboration is something I actually miss.   And this situation was the perfect blend of independence and teamwork – we were each off writing our own books, but the rules of each paranormal community were developed by the author writing the corresponding vampire book, the shifter book, and the werewolf book.    So we could take each other’s rules and characters and weave them into our own books.   And the three of us have spent significant time with each other in New Orleans, and we were absolutely committed to portraying that city in all her outrageous glory.   It really did work shockingly well, and whatever we missed, our terrific editor Leslie Wainger was there to bring things into focus and continuity.

The process was not without its quirks.   I was writing the second book and mine was due just two weeks after Heather’s – which posed a problem for me because Heather writes at the speed of light and I just – don’t.   So I couldn’t bear to wait to read what she was going to write… instead I ended up joining her on the Florida Romance Writers Muse Cruise, from Miami to Mexico,  and when the group left the ship to take a side trip to the Mayan ruins of Tulum, I trapped Heather in the back of the bus and we bashed out a lot of both our stories.   It was probably the most surreal writing experience I’ve had to date, but we got what we needed out of it.   (Writers have the most amazing lives – I know we’d enjoy them completely if it weren’t for that constant adrenaline rush of panic.)

And Harlequin has been wonderfully supportive of the series, including creating this great website for us:  ReadTheKeepers.com   (You can read first chapters of all three books in The Keepers trilogy there).

I wanted to talk about this experience partly for all our aspiring author ‘Rati, because I know as a new author I had this idea in my head that I would be writing a book a year, on my own, in the same genre.   I didn’t have any idea that opportunities like this would exist, or that I could create my own unique projects, like another collaboration I did this year which I’ll be able to talk more about shortly.    But publishing really is a whole huge world, and you never know what great experience is just around the corner.  Or even on a Mexican bus trip.

So, authors, I’d love to hear about quirky writing opportunities that have come up for you.  And readers – how do you feel about following authors you like into a different genre?

@VaActiveAngels @brithume @Liz_Cheney @AdamKinzinger P.S. You do know that most of the witnesses have been Trump supporters and associates, right?

@VaActiveAngels @brithume @Liz_Cheney @AdamKinzinger Why would they be adversarial? Just for the sake of it? What are they supposed to say? "Hey, maybe this violent coup staged by Trump was a good idea!" Give me an effin break.

@brithume The majority of those testifying against Trump are Republicans. There are two staunchly conservative Republicans on the committee. The GOP had its chance to help form this committee and chose not to. I'm sorry they're tearing down your cult leader.