I have a lot of great friends and fans in Minnesota. But today, there’s this lil ol’ football game where our beloved

are going to take on the no good, no ‘count, wretched, terrible honorable Vikings, [a team I would otherwise cheer for], a team with that guy who keeps coming out of retirement (he keeps saying that word, I do not think it means what he thinks it means…).

Meanwhile, those of us here in the 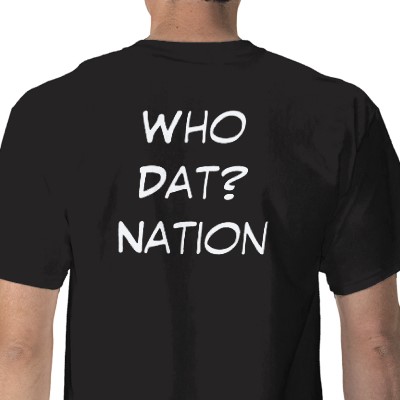 are gonna pray (and probably do a little voodoo) that Farve has a really off night and Brees, aka Breesus, as in 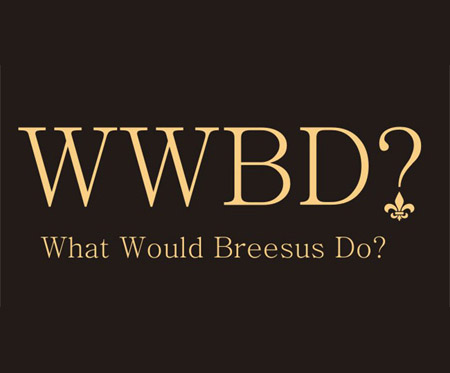 well… we just hope that Brees keeps on keeping on ’til the Saints come marching on into a victory.

We’ve been Saints fans since way back before they were called the ‘aints, and let me tell you, it was hard, some years, admitting to fandom for a football team who routinely seemed to shoot themselves in the foot whenever they got anywhere close to a winning season. There’s nothing quite like having an amazing winning season–especially for a city so hard hit like New Orleans, who really needed the economic and morale boost like this season has given it. Mostly, it’s just really nice to see perpetual underdogs finally have their year.

And I’m going to be glued to the TV, nervous and excited and probably yelling like a damn fool.

If I had any actual working brain cells left, I’d make some sort of parallel to the story arc of an underdog season to that of a good novel, or a parallel to shitty first drafts and crappy seasons, then editing and drafting the right players, and then the final polish and a Superbowl, but really, I just moved my entire house’s contents back into place in three days and then hosted a party for 62 people over here today (because we are crazy, we don’t have a better excuse) and in the middle of all of that, wrote a bunch on the new book that I am freaking loving (which is scary the bejesus out of me). So I’m going to yell at the TV, envy the hell out of friends of mine who have seats inside one of the suites in the Superdome, and, hopefully, be singing Who Dat? all damned night long.

So how about you? Do you root for a team? Any sports you love? Or if not sports, what inspires your fandom?

I’m holding a contest–all commenters for today’s blog through midnight (central US time) Monday night are eligible to win a $25 gift certificate to celebrate Allison’s newest release: ORIGINAL SIN. (Go check it out–it’s a supernatural thriller.) I just saw an amazing review for it, which should be up soon, and I’ll link as soon as I see it go live.