Happy Monday, everyone.  It’s Alafair Burke here.  It’s my pleasure today to welcome guest blogger April Smith, whose beloved Ana Grey series is being adapted as a televised movie by TNT.  She was kind enough to write about that experience for Murderati.  In April’s own words:

We all carry fantasies of the day Hollywood will shine its beacons of money and fame on our poor shambling protagonist  and she will be transformed from a lifetime of knocking on doors and laboriously piecing clues together, to a brilliant larger-than-life-but-still-true-to-your-vision sensation.

“Who do you want to play Ana Grey?” fans tweeted with great excitement when TNT announced it was going to film GOOD MORNING, KILLER as part of its new Mystery Night Movie franchise of two-hour TV movies based on mystery/thrillers.  Sure, I had files bursting with actresses from multiple attempts to bring Ana to the screen, but it had taken so many years to actually get the green light, the names were hopelessly out of date.  They had either passed the industry age limit on females for starring roles  (44, except for Helen Mirren) or had been plastic surgeried beyond recognition (except for Helen Mirren).

FBI Special Agent Ana Grey first appeared in NORTH OF MONTANA in 1994.  At the time, the idea of a half-Hispanic, half-Caucasian female FBI agent as the mainstay of a thriller was threatening.   I was advised by well-meaning supporters that if I wanted my books to sell to film, I should create another mystery series featuring a male protagonist.  Few actresses are powerful enough to “open” a movie, and worse, according to Hollywood savants, the character of Ana Grey was simply not castable, because there were not enough skilled, big-name Hispanic actresses to fill the role.   At the time it was unthinkably un-PC to cast an ethnic person of the wrong persuasion to play another ethnicity.  This never made sense to me (Australian theater’s beloved Robyn Nevin is about to play King Lear), but so it remained for seventeen years.

When TNT cast Angie Harmon and Sasha Alexander in Muderati blogger Tess Gerritsen’s Rizzoli and Isles, it was clear they had already created a hit.  They know their brand.  So when I learned the network was wild about Catherine Bell to play Ana Grey, I had a good feeling, probably for the first time in thirty years in television.  I had written the teleplay and was executive producer as well as the author – a lot at stake.  Catherine was very impressive in JAG and ARMY WIVES, but because everything was moving so fast in pre-production, there was no opportunity to meet her before we began shooting. 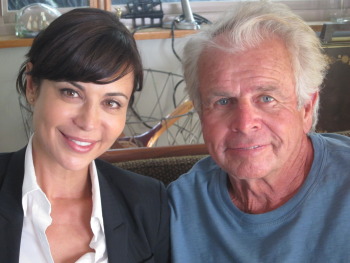 The first time I saw my leading lady was at a funky production office tucked away in a shipyard in Vancouver, B.C..  “Catherine’s arrived,” everyone whispered, and there she was in a tee shirt and jeans, just off the plane after traveling with her one-year-old; tall, lithe, beautiful, with huge empathetic eyes and tousled dark hair, ethnically ambiguous (Catherine is actually half Persian), strength, leadership, and kindness just radiating.  We hugged as if we’d known each other forever.  Eighteen years later, Ana Grey was born again.

We are now editing the film, and I can tell you Catherine’s performance is terrific. Pitch-perfect, as far as I’m concerned.  But I’d love to know what you think. GOOD MORNING, KILLER airs on TNT Tuesday night, December 13 at 9 PM.  Contact me at www.aprilsmith.net  For the full lineup of TNT Mystery Night Movies go to http://www.tnt.tv/title/display/?oid=146349. 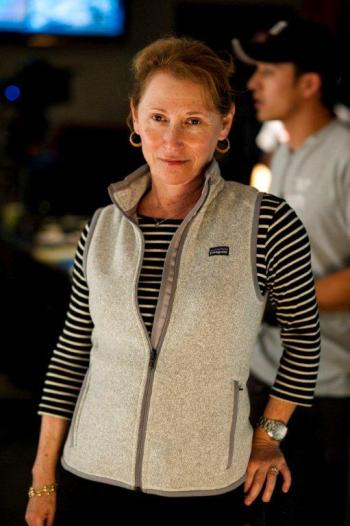 April on the movie set

It’s Alafair again.  Thank you so much, April, for sharing your experience with the Murderati gang.

April’s most recent Ana Grey novel, WHITE SHOTGUN, recently launched to rave reviews from People, the LA Times, Booklist, and on and on.  In his substantial review exclusively for Amazon, Robert Crais said, “Let’s cut to the chase: I love Smith’s work. She is one of the finest, smartest, most gifted writers working in crime fiction today, and White Shotgun is her best novel since the justifiably celebrated NORTH OF MONTANA. … This is the real deal.”

Please join me in welcoming and congratulating April.  We can’t wait to watch the movie and read what you write next!

7 thoughts on “WHEN YOUR PROTAGONIST BECOMES REAL”