A few days ago, a tweet (or maybe it was a blog post) from the extremely cool and uber-talented paranormal suspense writer Kat Richardson pointed me at this cartoon from fantasy writer Jim C. Hines: 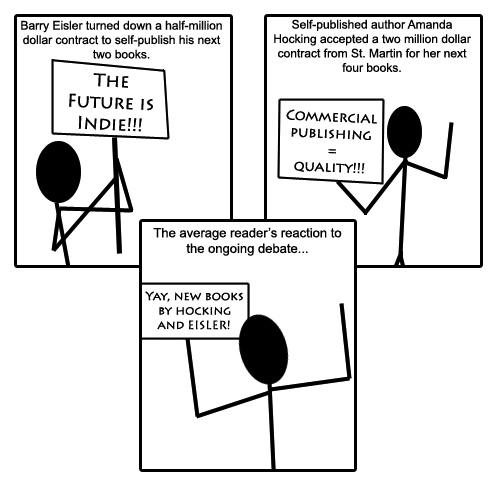 It was one of those observations that’s been, in the words of Jimmy Buffett, “so simple it plumb evaded me.”

Sometimes the discussion on book blogs can get a little, as they say, “inside baseball“. Some of us talk about e-publishing and platforms, royalty rates and market shares of various formats. Some of us talk  about process and outlining and marketing,  and we make predictions and projections and pontifications about the future of publishing. It’s interesting to writers, both currently published and pre-published,  because knowing about and discussing this stuff is part of our business.  It’s interesting to some readers, because they like seeing how the business works (or sometimes how it doesn’t work).

But I get the feeling that there is a larger mass of readers out there–Hines’ “average readers”– who couldn’t really care less about why Amanda Hocking went with St. Martin’s or whether Barry Eisler made the right decision to self-pub or whether Joe Konrath is the Antichrist (answer: probably not). They may not even read book blogs, and it’s highly doubtful they read Publisher’s Weekly or Galleycat. They’re the equivalent of Richard Nixon’s “Silent Majority”: the “real’ Non-“elite” folks who  every politician of every stripe claims they  represent.

Which leads us to the question: as authors, how do we reach these people? And what the heck do they want?

The knee-jerk response “they want a good book” is glib but empty, because no one agrees what consitutes a “good book,” at least until enough people like something enough that it sells a great number of copies. In that case, however, there’ll probably be a considerable number of people who’ll tell you that no, that top-ten bestseller is not a good book; it is, in fact, absolute crap, while this book over here that sold less than a thousand copies is, actually, the best book ever written.

It gets even more confusing when you begin to realize that the people whose job it is to determine what that great silent-but-hungry mass of consumers wants often don’t really know either. We’ve all heard the multitude of stories about writers rejected by dozens of publishers who went on to become bestsellers. And how many times have we seen the author that was supposed to be the Next Big Thing in publishing turn out to be the literary equivalent of the Segway? (You remember the Segway. It was supposed to be the future of personal transportation, “transforming the way you work, play and live,” according to the company’s website. So, do you own one?)

Even some of the things you’d think would be reliable predictors of popular success sometimes fail us. Our Alex has brilliantly explained the idea of “high concept”: those ideas that have already staked out a place in our “mental real estate” so that when you see one, you go “Yes. That. Want that.”

As an example, she uses PIRATES OF THE CARIBBEAN. Because everyone knows pirates, right? They’re cool.  Everyone wants to see a movie about pirates. So explain to me why POTC became a franchise while 1985’s CUTTHROAT ISLAND bombed so badly that it took Carolco Studios down with it.

It even has a monkey, for Chrissakes!

Likewise, one series of  YA books about young wizards at a magical academy spawned multiple sequels and made its author one of the richest women in the world; another, earlier one…well, they’re doing okay, but they didn’t make Diane Duane a millionaire, more’s the pity.

So, since no one really knows what’s going to be big and what’s going to bomb, what are we to do? Why, whatever makes us happy and gives us pleasure to write. Unless you can tell me what readers really want….

38 thoughts on “What The Heck Do They WANT?”