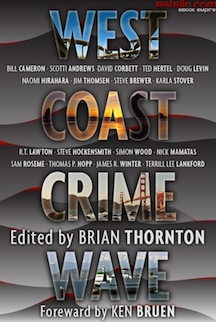 So far in my stint here at Murderati, I’ve largely refrained from what my cohorts refer to — with a merry wink and a mischievous grin — as BSP: Blatant Self-Promotion. Well, today’s the day I lose my cherry — on that front, anyway.

I want to share with you news of a short story collection — with a notable Murderati pedigree — to which I humbly, which is to say proudly, contributed, and which came out just last week.

It’s titled West Coast Crime Wave, and is the brainchild of publisher Michael Wolf and editor Brian Thornton, who put together an amazing collection of stories, with four Murderati connections — stories by me and previous Murderateros Simon Wood and Naomi Hirahara, plus an introduction from the one and only Ken Bruen, who graciously remarked:

Story collections are a lot like rock albums. Two classics trailed by a mediocre bunch of the dithering and the damned. Welcome to the editing savvy of Brian Thornton. When you see BT is the editor, you know it’s the gold guarantee and is it ever.

Some backstory: Michael Wolf has launched an eBook publishing house: Bstsllr.com, and West Coast Crime Wave is his maiden effort.

Michael cut his teeth as founding Vice President of Research for GigaOM Pro, the research division for GigaOM, a market technology research firm that sought to rethink the whole world of market analysis, and in his work he realized that technology-driven markets were changing things far faster and more completely that the old school could comprehend—and this was nowhere more true than in book publishing. (Check out this interview with Michael—or this one, if not this one —for his vision for the industry and his company.)

Michael tapped Brian Thornton to edit his first anthology, and Ken had it absolutely right. Brian did a masterful job, not merely due to his grace and intelligence but his sheer tenacity. He managed to herd a uniquely rabid crew of cats — including a scientist who clones and patents ”human immune system hormone genes” and “produced the first commercially successful nanotechnology device,” and an academic renegade with a Ph.D from Yale (call us the not-so-dithering and quasi-damned) — and we set our tales in an intriguing array of west coast locales, from Alaska to Los Angeles:

Authors whose names are highlighted, including me, have interviews or story excerpts posted on the anthology website, with more to come.

RETURNING TO THE KNIFE, by David Corbett — Marin County, California

THE TOWN AT THE END OF THE ROAD, by Ted Hertel — Talkeetna, Alaska

THE LAW OF INVERSE CONSEQUENCES, by Karla Stover — Tacoma, Washington

THE PEOPLE’S REPUBLIC OF EVERYWHERE AND EVERYTHING, by Nick Mamatas —

If you want to give West Coast Crime Wave a spin (and I truly madly deeply hope you do), it can be had for a proverbial song — said song now being valued at the insanely reasonable price of $3.99 — can you believe it, people! — from both Amazon (Kindle) and Barnes and Noble (Nook).

Jukebox Heroes of the Week: A bit of hip-hop promo for my real hood, Vallejo, CA, from a succession of homegrown rappers. I acquired the link in doing research for my next novel, from a detective on the Vallejo PD Major Crimes Unit, who was more than grateful for the unwitting gang intelligence it provided.

There will be some no doubt who think I should say Jukebox Zeroes, but I wish the suits at the local Chamber of Commerce or even the Progressive Posse felt half this much passion and love for this town.