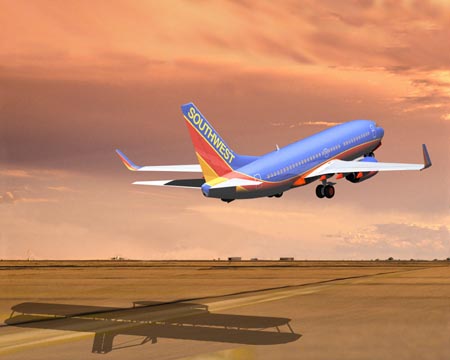 I’m on a plane again, heading west, Southwest Airlines, Denver to L.A. Last week it was Phoenix to L.A. The week before that, Salt Lake City. Albuquerque. Minneapolis.

Traveling for the day job. My willingness to travel is what makes me marketable, employable, desirable to the employer who would need an experienced traveller. I know the ins and outs of airports, I’m George Clooney in Up in the Air. I know what to wear and how to pack and what line to choose when entering security and where to find the hand sanitizer when I need it. I know where to look for my books if my books are there to be found and I’ve even found them, once, on the shelves of a bookstore at San Francisco International, the day before Bouchercon.

I’ve travelled most of the U.S. and Canada. Sales jobs, running the country or a region, meeting the reps, seeing the sights. I don’t let it go to waste, these paid-for trips, these lonely journeys flying alone and away.

I’ve worked New England three times and each time I force a sales rep to drive me to Lowell, Massachusetts, so I can sit beside Jack Kerouac’s grave. When I worked New Hampshire I took a side trip to Thoreau’s home where I swam Walden Pond end-to-end. I made my New York rep take me to Niagara Falls so I could call my wife and say, “Happy Anniversary, babe!”

I had an idea to write a short story about turkey hunting, so I called my Alabama rep and set a date to make sales calls during turkey hunting season. We spent a day in the woods above Huntsville and I got all the research I needed. When I worked Oklahoma City I had my rep take me to the Alfred P. Murrah Federal Building where I walked the memorial and cried like I child. I did the same with my rep in Manhattan, staring at pictures of the lost and dead on a chain-link fence circling the empty pit that had once been the Twin Towers. On another work trip, years before that, I spent three days driving a rental car through Amish farmland in Ohio after the grounding of the planes. It was another world; probably the most peaceful place on Earth at the time.

I worked Nashville, visiting the Grande Ole Opry after hours. I hit the local bars to get a taste of Southern music. I did the same in New Orleans. And in Austin. And in Memphis, where I also visited the home of the King. I worked the Midwest and visited the St. Louis Arch. The Petrified Forest. Fargo, North Dakota. The Mall of America. Navy Pier. Mile High Stadium. The Indianapolis Speedway. Boys Town in Omaha. Georgia O’keefe Museum in Santa Fe. The glaciers of Kalispell. Powell’s Bookstore in Portland. Pike Place Market in Seattle. Pikes Peak in Colorado. Alligator Alley in Florida. Pier 39 in San Francisco.

I’ve been put up in some nice places, too. The Waldorf Hotel in New York City. The Palmer in Chicago. The Peabody in Tennessee. The St. Francis, San Francisco.

And the airports, I’ve seen them all. LAX and SFO, Bob Hope International (Burbank), Sea-Tac (Seattle), Denver International, Dallas Fort-Worth, Atlanta, Houston, JFK. From the big hubs to the dirt runways. I’ve sat in just about every plane Boeing makes, from the comfey 777 to the fifteen-seat prop plane that took me from Boise to Butte, riding turbulence all the way.

I keep thinking I’ll do some writing in those airports, with all the time I spend waiting. Instead, I stare at the myriad human activity around me. Business men and women sitting cross-legged on the floor, tied to their laptops and iPads, guarding electrical sockets like eggs in the nest. College boys and girls traveling to destinations of youth, their eager, earnest energy cutting a path through the rest of us. Toddlers hop-scotching cracks in the tiles, their effervescent eyes open to everything they see, arms outstretched, hands waving, smiles enlarged with loud sing-song yelps that become screeching tantrums on the floor. Young parents happy and gay then suddenly stressed beyond imagination, tugging at their hair, doing deals with neighboring parents for an extra diaper or a few drops of Benadryl. Babies in their carriages or slings, sleepy eyes blinking, mouths suckling plastic nipples. Tough guys and gals with tattoos on their arms and bluetooths in their ears. Mousey house-wives reading every shade of gray. Elderly couples holding hands, some content, others quietly sparring, using words weighted with years of resentment. Retirees in a group, clutching tubes containing fishing poles for their trips to the Great Lakes or Montana or that small island off the coast of Nova Scotia.

I’ve found that I can’t write in the airports because I’m too busy watching, which, in truth, is a form of writing-to-be. Observation is the author’s greatest gift.

I try to write when I’m on the road and at times I’ve managed it well. But the temptation to sit and listen is often unbearable. I’ve sat in so many cafes – in Columbus, Ohio, in Boise, Idaho, in Baton Rouge, in Missoula, in Omaha, in Boston, in Tallahassee – and eavesdropped on conversations that held me breathless. I’ve heard tales of grief and stories of inspiration. I’m determined to write a book called, Overheard in Cafes Across America, a cross between the works of Charles Kuralt and Studs Terkel. Something I’ll do on my own time, since my agent already advised me to write something else.

There’s no doubt about it, my travels as a salesman have benefitted my work as a writer. It’s a strange push-me-pull-you relationship I both love and detest. No matter how hard I try I seem stuck to this life. It’s like my writer-self knows that it grounds me. I’ve spent days in cars with salesmen crossing one end of a state to the other, all the while peeling back the layers of their lives, learning how true human character works, that individuals are messes of irrational thought governed by reflections on personal experience. Everyone comes with baggage and their baggage defines them. Their depth is deep and circular, and infinite. This I learn not from books on how to write good character, but from observing real people in action. Through observation I’ve learned that the human condition is complicated and universal, that our differences are many, but all can be bridged by attempting to find common ground, somewhere, somehow. And when I bridge that gap, when I see the world through the eyes of someone so different from me, from a turkey hunter, perhaps, then I can write that character from the inside out.

My day job is not for everyone. I’m employed largely because I can hold up under the weight of changing time zones, cancelled flight schedules and car rental conundrums. I can take being thrown under the bus, into the firing squad of emergency sales meetings or a Colosseum of frenzied customers. I manage because it funnels into the molten pit of my writing.

I need the job and the job needs me. We have a symbiotic relationship. I’ll bitch and scream about having a day job, but inside I know the truth. It’s not the cash. Or the health insurance. Or the expense account. It’s the perspective I get when I watch, observe and participate. Life in the air is what grounds me.

26 thoughts on “WEST BY SOUTHWEST”