Today I’m thrilled to host Scott Nicholson here at Murderati.  Scott is a friend and one of my favorite supernatural thriller writers (some people say horror; I think what Scott delivers masterfully is spooky thrills, the best kind!)

If you haven’t read Scott, I highly recommend you give him a try. Here’s his Amazon page to browse, I guarantee there’s something for everyone, and the price is right!

Just added:  Scott will be giving four books away (free for Kindle) this weeked (March 17-18) at http://www.ebookswag.com , so it’s the perfect time to load up!

And those of you who know anything at all about e publishing know that Scott has been at the vanguard of the e publishing revolution – I’ve been wanting to get him here for ages to talk about what he sees as the future. So for your enjoyment and hopefully enlightenment – here’s Scott! 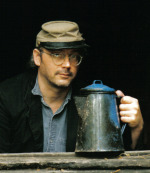 I’ve gotten out of the “writer babble” business for two reasons: (1) I don’t know as much as I thought I did, and (2) it’s all changing so fast that even the boldest predictions of digital evolution quickly become laughable.

I don’t even use traditional publishing as a reference point anymore, because that is so far removed from most writers’ realities that it may as well be Shangri-la or Hollywood. The indie vs. trad debate is now only meaningful for a small group of people, and they are all making way more money than you or me.

So you are in it, and if you are lucky, you made a nice little nest egg back when everyone was standing on the sidelines deciding whether indie was the way to go. Hopefully, you shook off the intellectual shackles that chained us to the agent speed-dating sessions at writing conferences and were hammered and locked into place by “publishing experts” with 20-year writing careers in the old system. You know the mantras: “Get an agent,” “Only hacks self-publish,” and “You can’t produce and distribute a book without the advice of publishing experts.” Basically, ego affirmation. Of course the experts didn’t want to lose their position of authority (and in the agents’ case, the intermediary status of being the first in line to get checks.)

But the gate was left open and the horses all got out of the barn, or something like that (come up with your own gatekeeper metaphor; I am writing this for free!) So now we have a market where the 99-cent ebook had a year’s run, and the pool was finally beginning to find stratification (crappy books sinking, good books nailing stable plateaus) when Amazon unleashed the latest version of indie roulette—the free ebook.

I’m on record as predicting the flat-text e-book era has an outside range of five years, at least for fiction—specialized non-fiction and manuals will continue to be valuable for their content alone. I believe e-book sales will continue, but certainly not with expanding profits for all involved. Now that there are thousands of free Kindle books available every single day, how long before readers come to expect and even demand free books exclusively?

Freebie roulette. Great for readers. Good for Amazon (maybe in the short term, but it is hard to figure the long term). Terrible for authors.

The market is diverse enough to support many different price tiers, but writers who want to survive in 2015 will need to make money off of free books, or they will soon quit writing.

I only see one outcome: ad-supported or sponsored books. At first blush, you’d think N.Y. has an advantage, since Madison Avenue is right there. But can corporations, with their large structures, be able to compete when indie or smaller entities can react more quickly to present conditions instead of protecting some imagined status quo?

J.K. Rowling can inspire a Pottermore built around her brand, and James Patterson, Tom Clancy, and Clive Cussler have already built factories around their names (and, yes, V.C. Andrews, you can roll over in your grave two or three more times for all I care, because this is all your fault). But most of us are not factories or we wouldn’t have to indie publish.

This points out the new era of the branded writer. And not just “writer,” but “content creator” and even mere “idea marketer.” A personality is more suited to building brand identification and audience than a publisher is. I say “James Patterson” and you get an image. I say “Random House” and what do you get? Randomness. We’ve seen it here locally: “Ray’s Weather” is where you check the weather and “Todd’s Calendar” is where you click to find what’s happening in the region—and both are ad supported. You can get the free content elsewhere but you don’t get the human personality attached.

I’m already experimenting with the ad model because I believe it is viable. I am counting on Idea Marketing being one of my foundational pillars. I am not quite sure what it all looks like right now, but I look at it this way—you don’t need NY in order to give away tons of free e-books or to spread an idea or to build a social platform. You are the idea you want to spread.

Other authors will say “I’ll never sell out.” (Ironically, those are usually the authors who have given most of their incomes to agents and publishers…) I don’t blame people for sticking with what worked in the past. It all goes to how invested you are in a certain system and how the alternative looks, and, of course, the turf where you’ve staked out your ego. Publishing-industry talk on e-books uses phrases like “managing risk” and “cautious adaptation.” That is why those of us in the trenches knew Barnes & Noble was in serious trouble when most in the “publishing industry” only realized it recently when BN’s horrifyingly bad third-quarter reports came in. They are working off of old data while I work off the data I got an hour ago.

And my data says this may be the very peak of the Golden Age of digital publishing. The $9.99 novel may be dead this year, since three-quarters of the current bestsellers are low-priced indie books. As fast as major publishers yank their name-brand authors out of digital libraries, 10 new indies cram into that virtual shelf space. Maybe forever. James Patterson’s factory can’t run on $2.99 ebooks, but mine can.

But what happens when the $2.99 and 99 cents drop to permanently free? Where’s your sponsor? Are you willing to go there? It’s not going to be as clumsy as an image of a refreshing Bud Lite popping up when the main character enters a bar (though it’s not unthinkable at some point.) Can you see Jack Reacher with a favorite brand of soft drink, or Bella Swan wearing only Calvin Klein? At what point is your willing suspension of disbelief shattered? At what point do you realize the ad is the only reason the book can exist at all?

My informal polling on ad-supported ebooks yields statements like: “I’ll quit reading before I put up with that.” I also remember saying I’d never carry a cell phone, or be on Facebook, or give up my vinyl albums, or start thinking that maybe nuclear energy is the best short-range answer to our energy addiction. Or that I’d ever read an entire book on a screen.

I don’t know the answer, but I am deeply invested in the question. So, ads in ebooks. As readers and writers, what is your opinion?

Scott Nicholson is the bestselling author of a bunch of books and also released The Indie Journey: Secrets to Writing Success, because some people still think you can buy the secret instead of be the secret. Follow him on Facebook, blog, Twitter, website, or newsletter.