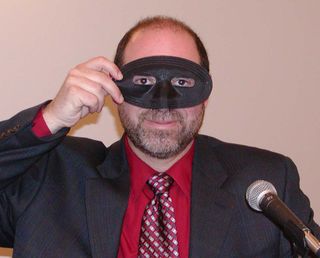 Shall
we talk about sex?  Come on, you know you want to.  My chat with you
today grew out of a discussion I had with J.T. about the sexy scenarios
in her writing, and what I saw lacking in sex scenes written by men.

This
is all how it looks from where I’m sitting.  Unless stated otherwise,
everything you read here comes from my own narrow, admittedly-flawed
straight-male perspective.  But as I see it, there is a distinct
qualitative and quantitative difference between the way male and female
writers write about the sacred and private act.

When asked if
sex was dirty, Woody Allen is reputed to have answered, “Only when it’s
done right.”  The same could be said of all writing.  A writer has to
get his hands dirty if he wants it real.  But that doesn’t mean that
love scenes need be visually graphic with coalescing body parts.  The
best love scenes give a sense of the passion and urgency, the heat and
the release, without having to resort to purple prose clichés involving
throbbing members and moist femininity.  Anatomy lessons are fine in
medical tomes and Philip Roth novels.  But they can murder a love scene.

Eroticism
in modern crime fiction has a mixed ancestry, making this a difficult
discussion even if it didn’t embarrass me to write it.  On the feminine
side, we have Romantic Suspense, a subgenre that brings together
elements of – well, duh – Romance and Suspense.  My exposure to Romance
fiction – what is sometimes pejoratively referred to as the
bodice-ripper – is admittedly limited.  I’m awed and impressed by the
scope of this genre.  There are dozens of categories of Romance, and
each category has subcategories of its own.  Each has its own
traditional structure, and its own rules as to how much – or how little
– sex can appear in its pages.

The basic rule of a Romance Novel
is that the central plotline involves the romantic love between two
people, and that the book has a happy ending.  Romance Writers of
America
lists nine subgenres, ranging from Contemporary Romance to
Inspirational Romance to Paranormal Romance.  Over at Harlequin, they list around forty categories and
subcategories, covering various historical periods, ethnic groups, and
supernatural curses.  Some of Harlequin’s categories, like Tender
Romance and Inspirational, are pretty tame.  But over at Silhouette
Desire and Harlequin Blaze, things can get pretty steamy.

In her
blog column of December 16, 2008,
Tess Gerritsen wrote about her work under the Harlequin Intrigue
imprint:

On the other
side of the family tree is the Men’s erotica (a term I use advisedly)
that grew out of the pulp tradition.  Magazines like Black Mask and
Dime Detective often had suggestive cover art, but one had to look no
further than Spicy Western, Spicy Mystery, and Spicy Detective to get
the more risqué and suggestive material.  As the pulps began to fold
up, sexy paperbacks became more widely accepted. Bruce
Cassiday was one of those writers who transitioned from the pulps to
paperback originals.  Under the names “Carson Bingham” and “Max Day” he
wrote a number of lurid paperbacks including The Gang Girls (1963) and
The Resort (1960).   MWA Grand Master Lawrence Block wrote more
sex-novels than he could – or would care to – keep track of.  In fact,
while as far as I know, no one else ever wrote under the names “Andrew
Shaw” or “Sheldon Lord,” Block refuses to associate with books like
Army Sin Girls and Call Girl School.  But to a few of his early sex
novels, including some lesbian romances written as “Jill Emerson” and
the coming (no pun intended) of age adventures of “Chip Harrison,”
Block has reluctantly given his name.

So what distinguishes the sex scenes written by men from those written by women?

When
I began thinking through material for this essay, I drew a line down a
page and tried to chart out the differences.  But I very quickly
discovered that the lines aren’t well drawn once you go beneath the
sheets.

I. Men are more shy at sex-talk than are women.

Perhaps
this is a product of our wiring, the same thing that makes it tough for
us guys to talk about our feelings.  Do you ever see men talking to
each other in the rest room?  (Straight men, I mean).  No.  It doesn’t
happen.  Two men standing at side-by-side urinals will go to great
lengths to ignore each other’s presence.  Women on the other hand. . .

By
the way, it’s a well established fact that a man who brags about his
sexual exploits is either exaggerating or is making the whole thing up.

II. The fantasy lives of men and women differ.

Here’s
where I know I’m going to get in trouble.  But at our most instinctive,
men are hunters, and women are gatherers.  For men the fantasy is the
hunt and the conquest.  For women, it’s being held.  (God, I’m
embarrassed to have typed that, but there’s enough truth in it that I
can’t go back and delete it).

But wait.  It gets more
complicated.  Men have an instinctive need to conquer, but in our
fantasies, we like to be teased.  Women instinctively want stability
and commitment, but – and I don’t claim to understand this – their
fantasies often involve being ravished.  Just look at the typical
Harlequin book cover.

The
objects of our desires likewise differ.  Men (in literature and by and
large in life) tend to fantasize younger, nubile women.  Nabakov took
this to a lunatic extreme.  Women tend to fantasize big, strong,
strapping men.  The book covers don’t lie. 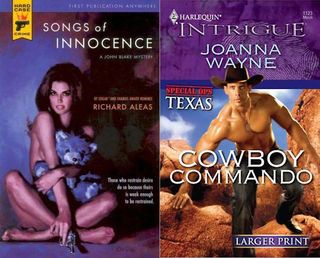 And what is it about that word, titillate?  Just saying it, just typing it turns me on.

So who writes better sex scenes?

A few months ago at the KillZoneAuthors blog, Clare Langley-Hawthorne wrote a column that sparked an interesting exchange.  Author John Gilstrap said:

No
sex scene has ever survived to the final draft of any book I've
written. Women write that stuff better than men, I think, because they
learned sensual prose from the masters of the romance genre.  I learned
mine from Penthouse Letters.

To which Clare Langley-Hawthorne responded:

Ah
John – if only it were true that all women writers did write sex scenes
better! Kathryn, I agree that humor and sex often go hand in hand (so
to speak) and maybe that's when the difficulty arises – making it
intentionally rather than unintentionally funny!

On my own
blog-column of January 23, I opined
that women have an easier time writing about sex then do men.  J.T.
Ellison responded:

I find writing sex one of the most difficult
things I do. I purposefully avoided sex in my first book because I
simply didn’t have the guts to try it. When I finally did, I may have
gone a wee bit overboard (see hotel room scene in 14 – and yes, I’m
blushing writing that.) I’ll tell you though, the sex scenes I enjoy
reading aren’t by women, they’re by men. Barry Eisler, Daniel Silva,
Lee Child – they can all hit the right, ahem, notes.

J.T, I’ve
been meaning to talk to you about that hotel scene.  Murderati members
don’t throw their sex around willy nilly.  A good sex scene – like any
scene in a novel – should serve to advance the plot.  The love scene at
the W Hotel in J.T.’s novel 14 takes place in the aftermath of a very
unpleasant sequence in which Ellison’s heroine has escaped from the
clutches of a sexually depraved villain.  Taylor’s lover, John Baldwin,
is sensitive to this fact, and handles her with careful reluctance.
But Taylor’s sexual urgency builds as they approach the hotel room:

Taylor
was on him before the door lock clicked to let them know they were
safely ensconced in the womblike area.  Her ferocity astounded him.

What
is worth noting here is how the love scene between Taylor and Baldwin
serves as an emotional counterpoint and tension release to the ugly and
traumatic scene that preceded it.  Alexandra Sokoloff uses a love scene
to similar effect.  In chapter 25 of The Harrowing, Sokoloff’s
protagonist Robin Stone is raped by a ghostly entity.  In the following
chapter, in the aftermath of rape and a murder, Robin and a male ally
escape to a motel where they find solace in a surprisingly fierce love
scene.

None of this answers our question: who writes better sex?

Laura
Lippman’s recent anthology of short stories, Hardly Knew Her, not only
contains some of the tightest writing around, it also has some of the
sexiest.  The stories ooze of sex and sensuality.  In more than half of
the stories, female characters use their seductive talents for revenge,
money, justice, or just plain fun.  In the story “Dear Penthouse Forum
(A First Draft)” the female protagonist is writing a fictionalized
account of a sexual encounter when she stops and says:

. . . too
much buildup, she supposes, which is like too much foreplay as far as
she’s concerned.  Ah, but that’s the difference between men and women,
the unbridgeable gap.  One wants seduction, the other wants action.
It’s why her scripts never sell, either.  Too much buildup, too much
narrative.  And frankly, she knows her sex scenes such.  Part of the
problem is that in real life, Maureen almost never completes the act
she’s trying to describe in her fiction; she’s too eager to get to her
favorite part.

Was Laura being cheeky when she wrote that?  Was
it irony that drove her female protagonist to complain about “too much
foreplay” and her own eagerness to get to “her favorite part”?

Harley
Jane Kozak’s upcoming novel, A Date You Can’t Refuse, contains one of
the wildest, hastiest, and most concisely written sex scenes I’ve
encountered.  It takes place on a rooftop parking lot at Neiman Marcus,
and is captured with the words:

We didn’t talk much.

You gotta love it.

So
back to our core questions: What is the difference between sex scenes
written by men and woman?  And who does it better?  I don’t think I can
answer that.  The grass is often greener on the other side of the gene
pool.

Now enough talk.  Go do it!

I mean, go write about it!

Oh, what the heck.

Steve Steinbock is the regular Friday columnist at CriminalBrief.com.  As a book reviewer and columnist, his
work has appeared in Ellery Queen’s Mystery Magazine, The Armchair
Detective, Crime Time, and the Portland Press Herald.  He is the Review Editor for The
Strand Magazine, is a Contributing Editor for AudioFile Magazine, and
serves on the board of the International Association of Crime Writers – North
American chapter.  He is recognized
as an authority on the history of crime and detective fiction, and was the
opening speaker at the Ellery Queen Centenary Symposium at Columbia
University.  In his day job, Steve
is a Bible Scholar.  No,
really.  He is the author of three
books and numerous articles and columns on the Bible and Jewish philosophy.  He can translate the Old Testament from
the original Hebrew and show you all the nasty parts.  He lives in
Maine.

PS: Many thanks to my friend Mr. Steinbock for sitting in for me today – we've been excited about this column for a while! I'm traveling today to the So. Carolina Book Festival (where I'm engaged in a million things over the weekend, including a panel with our Alexandra) and didn't want to ruin Steven's excellent column with blathering at the top.  Enjoy, discuss, and I'll check in as I can during the travel day. See you next week!

@BroncoGuy87 @nytimes They only Back the Blue when it's Blue on Black.

@libertas_now @nytimes So much for Back the Blue.