As you all know, we here at Murderati do love us some fellow writers.  It’s my pleasure today to interview the wonderful Denise Hamilton.  Give her a hearty welcome! 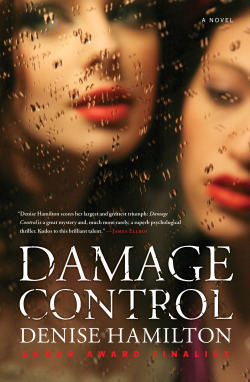 Congratulations on the launch of your new book, Damage Control.  Tell us a little bit about the book.

Damage Control is a political thriller with elements of surf noir and grrrl noir.  (Already an editorial aside.  Surf and grrrl noir?  Love! – AB)

It’s a standalone that introduces a young ambitious PR exec named Maggie Silver. Maggie’s divorced, with an upside-down mortgage and a mom who’s outstayed her welcome as Maggie’s room-mate. As the book opens, Maggie’s just landed a new client – a politician whose pretty young aide has been found murdered. When Maggie walks into the conference room, she’s shocked to discover the client is U.S. Senator Henry Paxton, the father of her glamorous but troubled high school friend Annabelle. The girls had a fierce, intensive, psychologically obsessive friendship in high school but something bad happened on a beach one night that sundered them and haunts them into adulthood. As Maggie defends her old friend’s Dad, she must decide for herself if he’s as innocent as he claims and face the ghosts of a past she thought was long buried.

What’s your favorite recent political scandal, and how should it have been cleaned up?

Oh my, such a smorgasbord to choose from!  Well, the biggest jaw-dropper, despite the years of rumors, was definitely the grotesque carnival of Arnold Schwartzenegger’s love child. And I am not sure how you clean that up. I think his people and Maria Shriver’s people actually did a good job on that one. They didn’t speak to the press, other than with prepared general statements. They rode it out, except for Arnold’s cringe-inducing t shirt that said “I Survived Maria.” Way to alienate half the population, dude.

But as a way not to run a damage control campaign, Weinergate is a good case study. Dude should have manned up immediately, admitted everything, begged forgiveness of the public and his wife, then scampered off to rehab ASAP while the PR folks trotted out experts to explain his compulsive exhibitionism and risk-taking as a psychologically addictive disease. The basic rule: Always tell the truth, or at least don’t tell lies, because they’ll come back to haunt you. “Own” your story and always have some comment, because if you don’t, others will. The Internet abhors a vaccuum.

I’m sure that some of your loyal readers will take one look at the book’s jacket image and description and think it’s a big change from the noir, atmospheric, Chandleresque, Denise-Hamiltonian novels that first brought them to.  Is this really a change from your previous work?  And was reader response a consideration when you envisioned your most recent books?

Publishers are always trying new things with book jackets. I really like this cover, there’s an Art Deco feel to it that isn’t all that far from one of Chandler’s – or perhaps Patricia Highsmith’s – psychologically twisted tales. You can tell the two girls on the cover are connected by fierce, conflicting emotional ties. Damage Control is a political thriller with definite elements of noir. I wanted to expand my range, while still staying true to the gritty, sexy and glamorous feel of my earlier books. This protagonist has a family so that’s a departure for me. Maggie’s mom, a cancer survivor, lives with her and I wanted to depict a complicated mother-daughter relationship filled with anger, love, frustration and annoyance. In other words, like real life. But like my other books, there’s also a strong romance (or two!).

If you got to play casting agent, who would play Maggie Silver and Sen. Henry Paxton?  Oooh, and while we’re at it, who gets the role of your series character, Eve Diamond?

Oooh, I want British actor Bill Nighy for Senator Paxton. And he’s very senatorial, with that high forehead and leonine blond hair. Can you tell I have a wee crush on him! 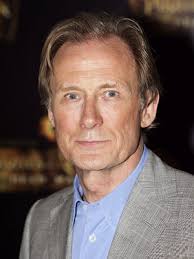 I assume Denise means this version.

For Maggie Silver, perhaps Kristen Dunst and for Eve, Natalie Portman or Jessica Biehl. But you know, ask me next week and I’ll have other ideas.

Speaking of Eve, do you have any plans to bring her back soon?

I have about half an Eve novel written, but it will depend on what my publisher wants next! I’ve also got an outline for another standalone that I’m excited about. And some readers want me to bring back WWII girl spy Lily Kessler from The Last Embrace, which was my 1949 Hollywood novel. In addition, I’ve got a draft of an urban fantasy novel I work on in my ‘spare time.’ Hah! So there’s a lot to choose from.

You write a monthly perfume column for the LA Times.  What’s up with crime writers and fragrance?  (Our own Jonathan Hayes is fragrance obsessed as well.)

I didn’t realize there were so many writers who love perfume and vice-versa until recently. I thought I was alone in my secret little obsession. But there’s a whole online world out there. I’m particularly fond of vintage Carons, Guerlains, Diors and Chanels. All the classic French houses. My mom was Russian-French and as a kid, I’d sit in the bathroom, lining up her crystal flacons on  the tile counter, spritzing myself silly and acquainting myself with the different notes. Creating perfume is an art form like painting, composing and writing. The finest noses are olfactory geniuses. But the first perfume I got obsessed with as an adult was Donna Karan’s Chaos, which is now discontinued and highly sought-after on ebay. That story became my first perfume column for the LA Times.

You worked for ten years on the staff of the LA Times.  I’m often asked whether I’d be a crime writer if I hadn’t worked first as a prosecutor.  I know it’s a bit like being asked, “What would you be like if you weren’t you?,” but I’ll ask anyway: Would you be a crime writer if you hadn’t been a journalist?  And what’s your best story from your reporting days?

I was always writing stories as a kid, so I think I would have found my way into a writerly profession somehow, but I might not have landed in crime fiction – despite my love for LA’s mid 20th century crime writers – if I hadn’t worked at the Times. I did thousands of interviews, wrote thousands of stories, probably more than 1 million words. Journalism took me into prisons and courtrooms, on police raids, into the living rooms of distraught families, into hospitals and to crime scenes.

As to the best stories from my reporting days, they’re the ones I wove into the plots of my first novels: the immigrant Chinese kids living alone in big mansions or running with youth gangs in The Jasmine Trade, the teenaged girl who was murdered by her street kid boyfriend in an abandoned building, the wealthy tourist family who arrive at LAX with a little girl who’s being smuggled into the U.S. for nefarious purposes. Those were all ripped from headlines of stories I wrote in my 10 years at the Times. It was a wonderful training ground for a writer and a gold mine of raw material. 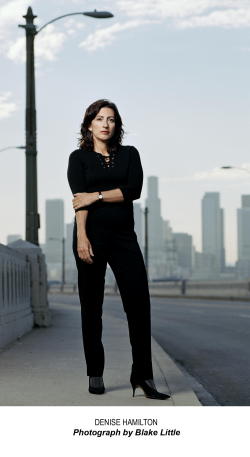 About a billion years ago, you, David Corbett, and I spent a few days in London together with a handful of other writers for a joint launch of our first novels published in the UK.  That would have been January of 2004.  I had met my now-husband only two weeks earlier, and you and Corbett were very generous to listen to me gush about him.  That was before my Duffer was born.  How has your life changed since then?

Oh my! Yes, I remember you lit with a romantic glow as you described him to us. I’m so very happy it led to a life together (raises virtual champagne glass).

That was a wonderful tour, it was so much fun to hang out together, to talk books and eat yummy meals and hang out at the bar and visit with Val McDermid and Mark Billingham and the Orion folks. It’s hard to believe so much time has passed. But my kids are 13 and 15 now, a bit easier to leave at home with Dad when I go on tour. We’re animal lovers here too, by the way. Two saucy, spoiled cats and a young blue-eyed husky-mix named Sirius White (he’s got white fur, so definitely not a Sirius Black! But he’s quite the dog star!).

How can readers get in touch with you if they want to continue hearing from you year-round?  Are you a Facebooker?  Tweeter?  What are your thoughts on how social networking fits into a writer’s life?

I welcome readers to write and friend me on FB. And I’m DeniseHamilton_ on Twitter, which I find a lot of fun, and a great way to convey news, musings, links to interesting stuff and just pithy bursts about what I’m up to. I’m always amazed at what gets the most comments, like a recent post with pic I wrote about making apricot jam. I do think that pics are important, I know my eye is drawn to them in the posts of others.

Social media is a great way to keep in touch with readers and other writers too but one also has to maintain the discipline to write. For me that means a separation of church and state. Since I’m a morning person, for me that means doing the creative writing in the morning, then moving into answering email and doing social media once I feel like I’ve punched the fiction clock. Of course life is messy and these boundaries crumble regularly, but we’re talking aspirational.

Thanks, Alafair, for inviting me to guest at Murderati. I also appreciate your smart and incisive questions. No wonder you were such a great prosecutor.

Thanks, Denise, for being a terrific guest!  Denise will be checking in throughout the day to respond to your comments.  She’ll also send a copy of DAMAGE CONTROL to one lucky commenter.

Denise Hamilton’s crime novels have been finalists for the Edgar, Anthony, Macavity and Willa Cather awards. She also edited Los Angeles Noir and Los Angeles Noir 2: The Classics, which spent two months on bestseller lists, won the Edgar Award for “Best Short Story” and the Southern California Independent Booksellers’ award for “Best Mystery of the Year.”

Her books have been BookSense 76 picks, USA Today Summer Picks and “Best Books of the Year” by the Los Angeles Times, the South Florida Sun-Sentinel and the Toronto Globe & Mail.

Find out more about Denise and read an excerpt of DAMAGE CONTROL over at her website, here.