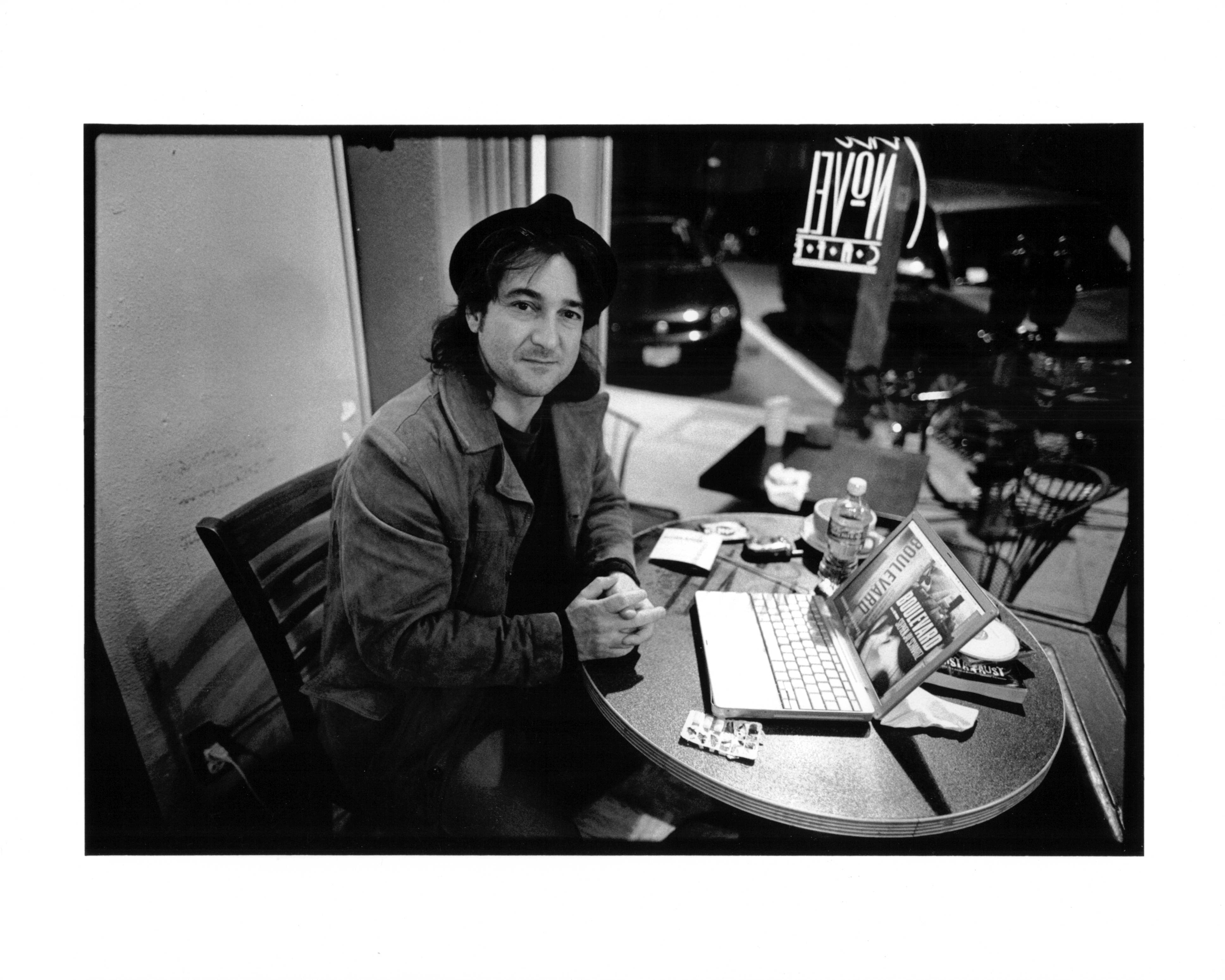 You’re looking at my office/work-space.  I’ve been writing at the Novel Café for over twenty years.  I’ve written most of ten screenplays and two novels there.  Recently the Novel Café went through an ownership change, and it is now called 212 Pier.

I’m an extrovert.  But I’m also an introvert.  And that probably wouldn’t make sense if I weren’t a Gemini.

Writing is a solitary profession.  We’re inside our heads when we write.  It’s lonely.  And I simply cannot face it alone.

So I surround myself with people and noises and music and chaos, and I manage to filter it all out into the blur of background noise as I write.  And when I get stuck or frustrated or stalled I look up and see the faces of my friends hard at work, since this is a writers’ café, and it gives me inspiration.  Makes me feel part of a community.  Sometimes I’ll catch the eye of another writer staring up, searching for an “out,” and I know that I can step away from my table and approach him and we can chat a while, take a break, discuss story or the weather or the local news.  And then, re-energized, fitfully empowered, we each of us return to the grind.

I can only write in cafes.  I cannot write in the quiet solitude of my home or, God forbid, a library.  Too much silence.

Writing in cafes has appealed to me since the day I discovered that some of my favorite authors spent their days in Parisian cafes.  Hemmingway, Gertrude Stein, James Baldwin.  The Lost Generation of expatriates.  It all seemed so romantic.  I latched onto the idea of the café writer and never let go.

I’ve written in the majority of LA’s cafes.  There’s the Bourgeois Pig in Hollywood, which is just a little too “Hollywood hip” for my taste; there was the old Pick Me Up Cafe, one of the first in LA and long since closed (I read all of “Portrait of the Artist as a Young Man” at the Pick Me Up, coughing my brains out on second-hand smoke); the Highland Grounds in Hollywood, where I also shot part of a movie I made after graduating college; The Rose Café in Venice, and so many more.

Since I travel a lot, I’ve hit most every hip café in every major city in the U.S.  I’ve found wonderful surprises in places like Columbus, Ohio, Boise, Idaho and Salt Lake City, Utah.  When I’m in San Francisco I write at the Trieste, a fifty-year old café, which features prominently in my upcoming novel, BEAT.

I’ve pretty much settled on 212 Pier (45 minutes from my home, but well worth it), and the below cafes, which are closer to my home:

This is the Catalina Café and Brewing Company in Redondo Beach.  I’ve put a lot of time on Boulevard and Beat here, and there’s a great community of screenwriters who come in every night. 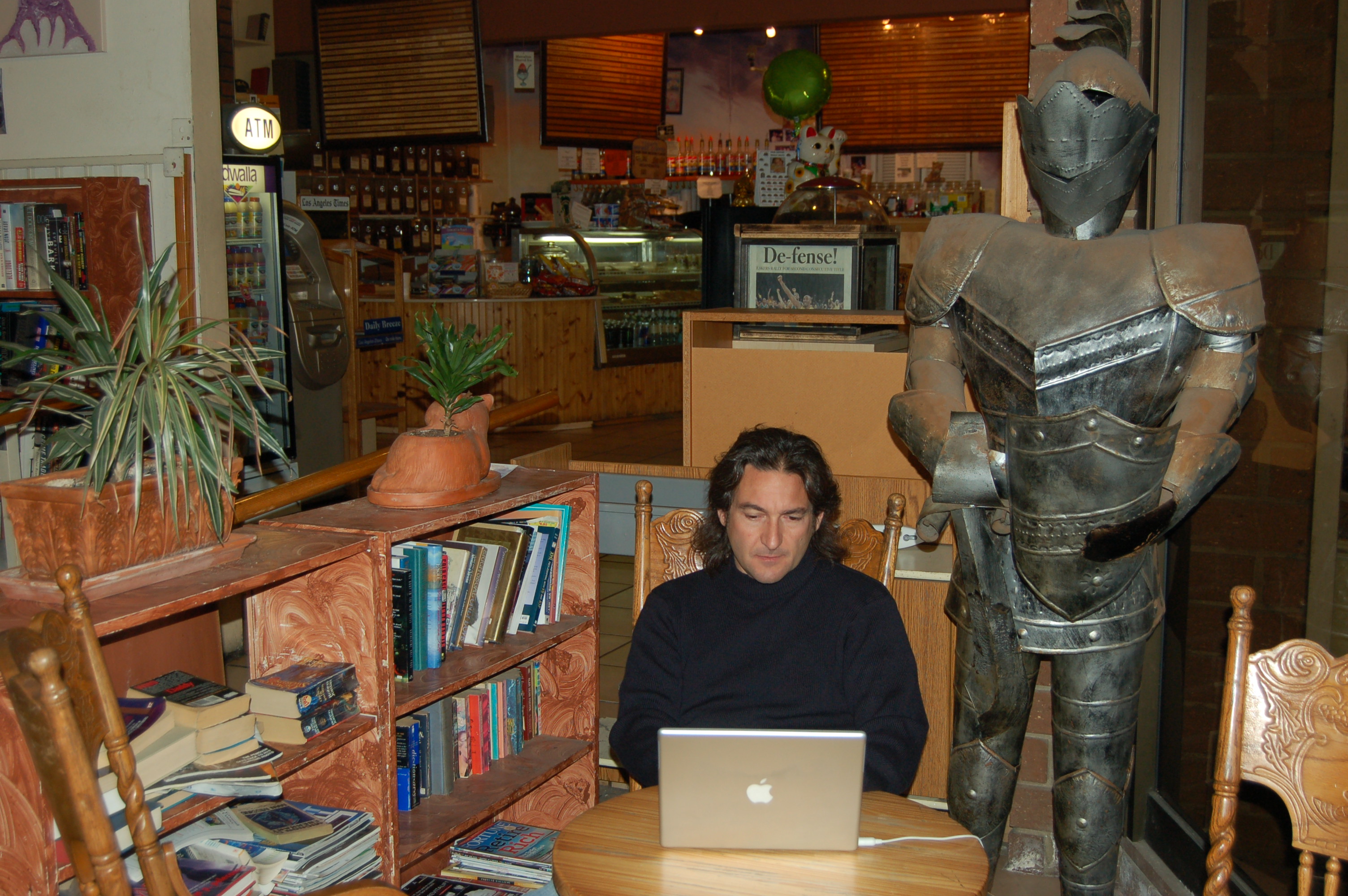 This is Coffee Cartel in Redondo Beach.  I write under the protective guard of the shiny, metal knight, who blesses each manuscript written in his presence. 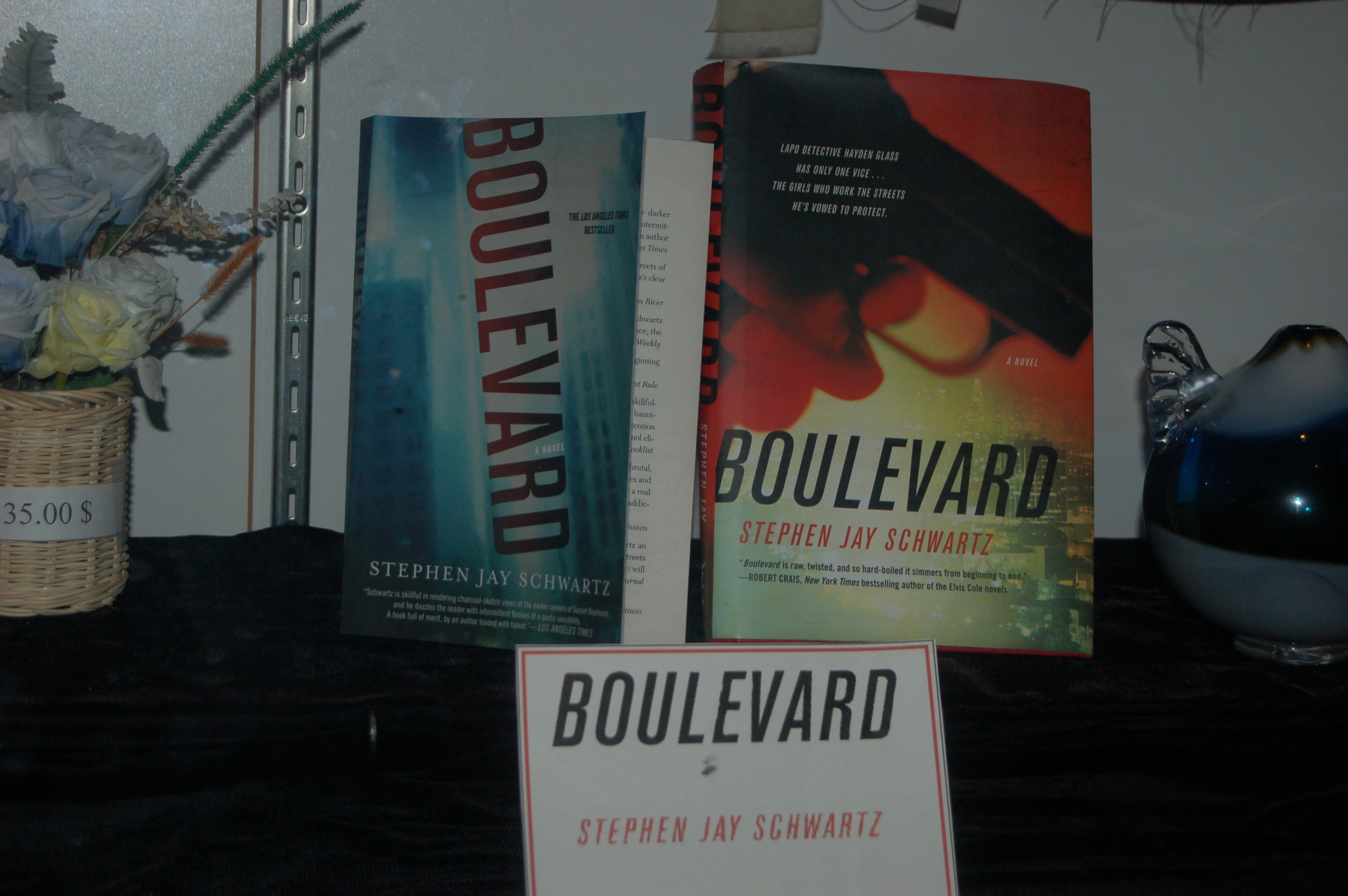 Another awesome thing is that Coffee Cartel has a special place for me in their display case.  212 Pier also has a copy of Boulevard prominently displayed in an area where they advertise the work of local authors.

I’ve pretty much given up trying to write at home.  I made a feeble attempt to create an office space using an itty-bitty alcove, a nook, a crannie, in my garage.  It quickly became “Steve’s Office Crap Storage Dump.”

When I have to do big, creative things, like this whiteboard for my 3 X 5 cards on WIP story points, I end up leaving it on the bedroom floor where it serves as a bed for our labradoodle. 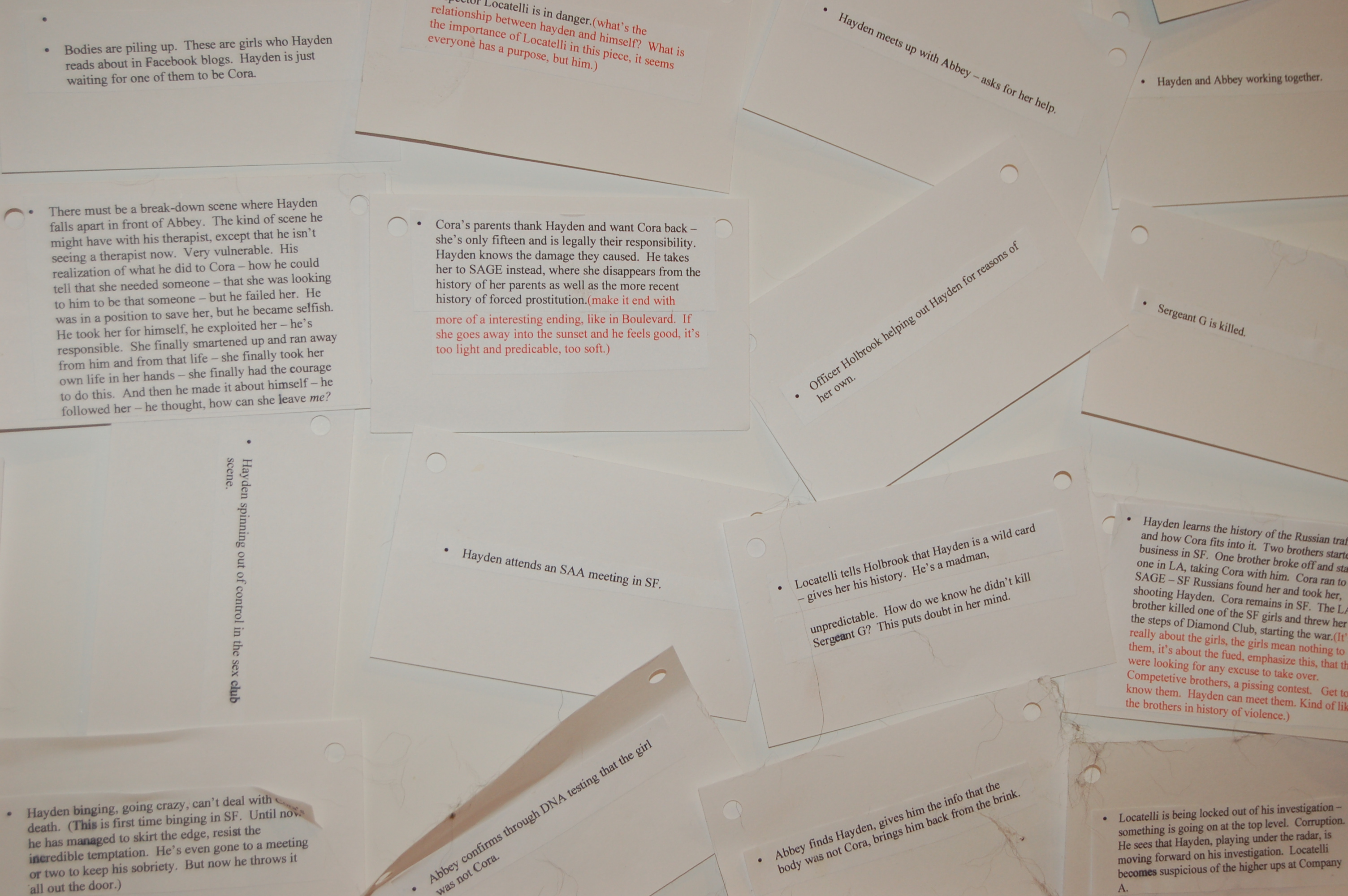 What I’m saying is that my work-space is a mess.  It’s whatever I have in my travel bag at the time, usually a stack of manila file folders filled with crap I’ve downloaded from the Internet, in no particular order, thrown onto the surface of some café table somewhere in this great big city.  It’s a wonder I’m productive at all.

Everything important is on my computer.  Which is basically a file folder on my desktop marked, “Beat,” for example, filled with files on character, plot, research elements, outlines, treatments and first draft chapters.  I’m a very linear thinker, so I pretty much depend on writing brief paragraphs of every scene in its proper order.  I’d love to get more sophisticated, but I think I’ll need a computer younger than 15 years if I hope to use the cool “author” software they’ve got in the marketplace.

Really, the last piece of sophisticated equipment I bought was an Underwood typewriter.  I’m hoping to get an IBM Selectric for Hannukah.

Oh, and after reading Rob’s post on Wednesday I decided to upload a photo of my library.  It’s where I worship… 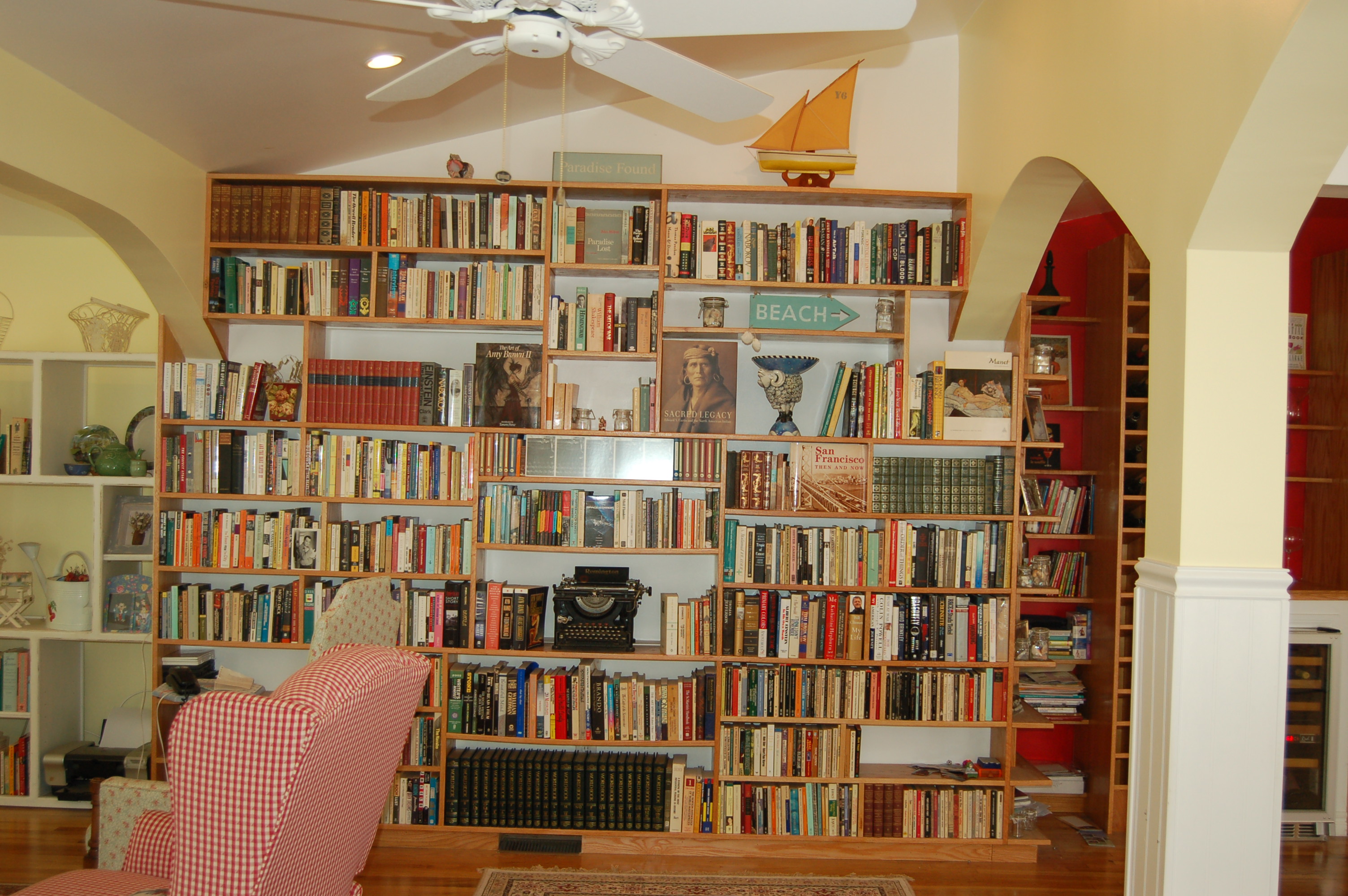 I’m  currently on a no-budget, youth hostel research trip in Europe, so I don’t know if I’ll be able to participate in the comments.  I’ll check in if I have Internet access.  I’m sure I’ll find a café with wifi!  It’s high time for adventure, my friends!

40 thoughts on “TOO LONELY TO WRITE ALONE”