See, it started innocently enough. Not long ago I was at a conference, where I met up with a dear friend who’s recently become vegan. And let me tell you, she looks gooooooooood. Like ten years younger, thinner, prettier. She glowed, people. All glowy with the good. I, being no dummy, immediately asked what in the hell had she done? Who had she sold her soul to and where could I line up?

Then she told me she’d become a vegan.

Now, at this point, I had had exactly one (1) appletini.

(It was my first, ever, and let me just say for the record that it is a damned good thing I am too lazy to learn how to spell “appletini” much less make them, because otherwise? This blog would be brought to you by the letters J A I and L.) Anyway, in the warmth and happiness of said appletini, “vegan” didn’t sound so scary.

It was the second appletini where I sort of lost my mind, because “vegan” actually started to sound easy. I could feel better and get healthy and lose weight and be proactive, all in one move. Lots less choice of things to eat, but hey, that just simplifies life, right? Simplification is good. Smart. I even hauled out my iPhone and started recording her suggestions of what I could eat and in that moment, I knew I could pull this off. This was going to be great! I only sort of worried when “tofu” featured prominently on a couple of her menu suggestions, but I then realized (and this was the part of my brain which was suggesting I have another appletini) that hell, I eat crawfish. How traumatizing could tofu be?

I was allllllll the way back in the hotel room before I had the epiphany: Cheetos are not vegan. 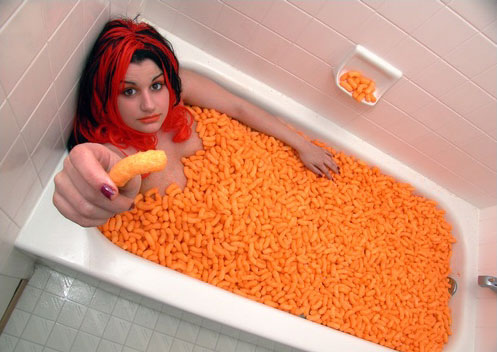 I think I might’ve broken the world record for “fastest failure of a diet.”

The thing is, it works for her. Really works.

But it would never work for me. I don’t have the same inclinations, the same desire, or enough patience. [I am not exactly the most patient of people.] [I know, I know, that comes as a HUGE shock to you all. Buck up.]

I do know what works for me: plain old exercise. Boring, non-glamorous, just-do-it walking and weights. Doing these things consistently.

Oh, but that other method was tempting, partly because she’d had quick, amazing results. Partly because it seemed kinda cool to be able to say, “I’m vegan.” Like wearing a costume or stepping into some other role.

It’s tempting, isn’t it, to try to fit into a slot that someone else does well, which is clearly successful? It’s like, “Well, since they know what they’re doing and that works, maybe that’s what I should be doing, too.”

It’s great to learn from others. It’s a smart move to see how someone else accomplished something and analyze what they did and why. But the next step after that is to then see how it fits you—your life, your experiences, your style. Your voice. And then choose what works for you. Not how you can contort yourself to fit into what others do, but what you would like to use of what they do to enhance your own voice.

What do you bring to the table? Who are YOU? Value that. Look at it carefully and appreciate it, because it is your gift. It is what will make your characters and your story and your plot unique. Your take on the world, how you see it, your perspective.

Me? I am, at my best, a hopeful cynic. I am pretty sure that there are people out there who are not only going to shoot themselves in the foot, 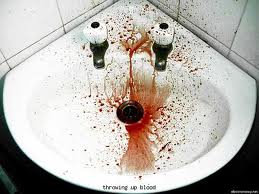 but they’re going to reload and aim at the other foot. I am hopeful, however, that they will miss at least one of those times. It is the suspense of watching that in action which fascinates me. It is how I frame the world, how I make sense of what is happening around me, how I communicate and function. [If it helps, I had written two books before I was able to explain that.]

In the meantime, tell me at least one thing you’ve done in your life which just did not “fit.” (C’mon. I cannot be the only person who’s tried a diet or [and no, I am not posting a photo] gone blonde.) What harebrained thing have you done?

@PaulSperry30 Maybe because the whole email thing was then and still now is bullshit. But you guys keep stroking it.

@mrddmia Give it up, buddy. The guy running the FBI was appointed by Trump. Your guy is toast.

@tom__builder @LisaDNews They only Back the Blue when it's Blue on Black.

@LisaDNews When will he be calling for armed revolt?

@thebradfordfile Not on the people.