Many years ago, when I was still living in Honolulu, I went to a hypnotherapist for what’s known as a past-life regression session.

For those of you who don’t know, such a session is very similar to your typical hypnotic regression, but takes you beyond childhood and into your past lives — all in hopes of helping you find out what happened way back when that may be screwing you up now.

I didn’t, however, undergo this procedure because I was feeling screwed up.  Instead, I was researching an idea for a screenplay and wanted to get some first hand experience.

It was an interesting hour.  I don’t know if I was actually ever under hypnosis — it certainly didn’t feel like it.  But I did find myself seeing visions of a previous life.  Visions that were either real memories or simply figments of my overactive imagination.

I tend to believe it’s the latter.

If the visions were real, then I was a Southern Belle during The Civil War who lived on a sprawling plantation.  If not, then I have problems that may well need to be addressed by someone with either a degree in psychology or intimate knowledge of the plot to Gone With the Wind.

Reincarnation is a subject that has interested me for many years.  I have no reason to believe it’s possible, but then I have no evidence that it’s hooey, either.  It makes perfect sense to me that we could well be living our lives over and over, in various forms, all in an attempt to finally get it right.

The woman who hypnotized me told me I’m a very old soul and am currently on my last life.  So I guess I’m finally getting it right.

One can only hope.

Reincarnation is one of those subjects that nearly everyone has an opinion about.  There are a ton of books about the subject and probably an equal number of movies and television shows that have addressed it.

While I’ve never approached the writing of a book from a commercial standpoint — that is, creating a plot simply because I think it’s hot and will sell — I have to admit that the idea of plotting a story based on a popular subject like reincarnation was pretty compelling.  Over the years, I’ve found myself so consumed with the phenomenon that I’ve never been able to let go of the story premise that sparked that long ago hypnosis session.  A story premise that goes something like this: 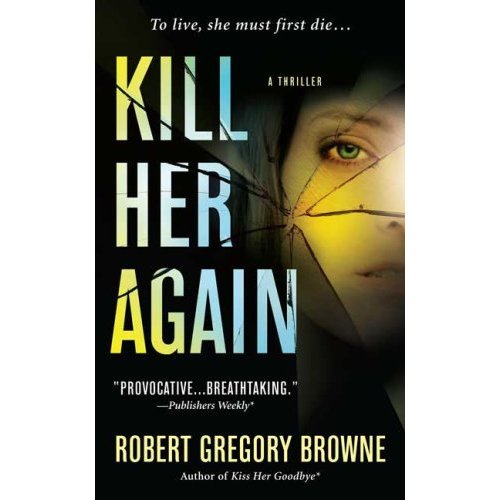 This creepy notion was the jumping off point for my new book, KILL HER AGAIN, which I’m happy to say was just released in the U.S. yesterday.

KILL HER AGAIN is the story of Anna McBride, a disgraced FBI agent whose life is slowly being destroyed by terrifying visions of a kidnapped little girl.  And while my original premise plays strongly into the story, it really was just a jumping off point.

After pitching the idea to my friend Peggy White a couple years ago, she had one of those “what if” moments that really turned the premise on it’s head and made me realize that it really was time to write this book.  So thank you, Peggy, for helping me make a good idea great.

I’d love to tell you more about the book, but I’ve already given you enough of a spoiler.  And if you’re at all interested in the notion of past lives married to an unrelenting thriller plot, I would be a fool not to urge you to pick up a copy <big grin>.  I’ve been telling everyone it’s a great beach book, and I certainly hope a lot of people will be going to the beach this summer…

Blatant self promotion aside, I’d like to bring this topic around to you, by asking you a few questions.

1. Do you believe in reincarnation?

2.  Who do you think you might have been in a past life?

And five of you who comment will be chosen at random to win a signed first edition of my debut thriller, KISS HER GOODBYE.  The deadline is midnight tonight, and the winner will be announced on my web page on Friday.

In the meantime, you’re all gonna have to do the right thing and immediately rush out and buy a copy of KILL HER AGAIN.  If not, I may just have to come after you in the next life….

43 thoughts on “To Be Made Flesh… Again”