As you may have noticed, some of us Murderati authors of late have been having a heck of a time getting brand new posts up on schedule for your entertainment.  It’s not that we’ve been shirking our duties, it’s just that life intrudes.  So rather than fresh content, for better or worse, you’ve been treated to a lot of Oldies but Goodies over the last few days.

Well, as it happens, I’m in a bind trying to put my own post together today.  The family and I are moving into a new home this weekend and to say I’ve been swamped getting ready would be the equivalent of saying Noah worked liked the devil preparing for the flood.  I’m dead on my feet.

Still, all excuses to do so aside, I’m not in the mood to fall back on an old post of mine on this Wednesday, no matter how brilliant it would have been.  So what I’m going to do instead is lightly touch on a subject that’s been on my mind quite a bit lately.

Take a look at this book cover: 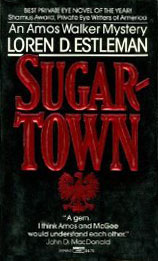 I bought this Fawcett paperback back in 1986 or so.  This photo’s rather lousy, so just to be clear, the cover text reads as follows:

“A gem.  I think Amos and McGee would understand each other.”
John D. MacDonald

Now, here’s my question: Can you guess what element of the overall cover ultimately convinced me to buy the book?

d)    the reference to the Shamus award

If you guessed b, you’d be close.  I’ve never been big on cover blurbs, but a kind word from John D. MacDonald would have been nothing to sneeze at.

The art?  It’s fine, but it didn’t particular impress me.

I liked the title, I didn’t love it.

And while Amos Walker is a great name for a series character, I wouldn’t have risked $1.95 on that alone.

Which leave us with d, the reference to the Shamus award.  That’s the correct answer.  I’d never heard of the Shamus award at the time and knew nothing about the Private Eye Writers of America, but I figured if a group of Estleman’s peers had seen fit to proclaim this book “the best private eye novel of the year,” it had to be pretty damn good.

I’m a little more jaded where awards are concerned now, of course.  But not by much.  I still believe in them, and value them, and yes, goddamnit, as an author, I covet them.  How readers in general feel about them is a mixed bag.  Some find awards important and some don’t.  And publishers?

Publishers don’t give a flying f-word about awards.

You want proof?  How’s this:

I’m a judge on the Best Paperback Original committee for one of the major book awards this year and I can count on two hands the number of submissions I’ve received directly from publishers over the last five weeks.  Authors have sent their own books in, publicity professionals have sent the books of clients in — but only three submissions have come from the house that published them.  The list of major publishers yet to be heard from, regardless of who did the actual submitting, would be longer than your arm.

Conclusion?  Publishers don’t think the promotional payoff of one of their books winning a literary award (short of the Booker Prize) is greater than the cost of mailing one physical copy each out to four or five award judges.

I think this is pretty sad and incredibly shortsighted, but maybe publishers are right.  Maybe awards really don’t matter.

What do you think?