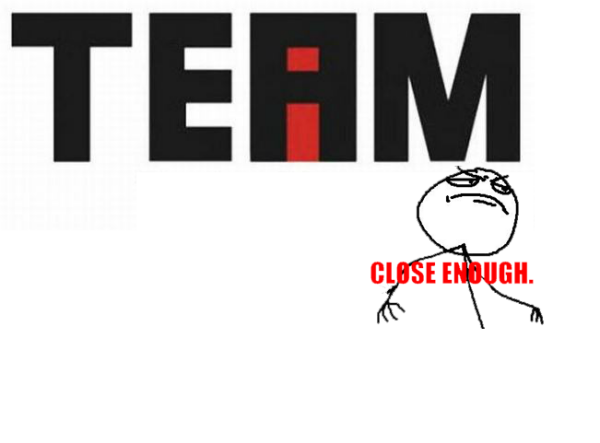 “Somewhere along the way, someone is going to tell you, “There is no “I” in team.” What you should tell them is, “Maybe not. But there is an “I” in independence, individuality and integrity.” Avoid teams at all cost. Keep your circle small. Never join a group that has a name. If they say, “We’re the So-and-Sos,” take a walk. And if, somehow, you must join, if it’s unavoidable, such as a union or a trade association, go ahead and join. But don’t participate; it will be your death. And if they tell you you’re not a team player, congratulate them on being observant.” – George Carlin

For months I’ve wanted to write a blog about “teamwork” and then, just last week, a friend posted the above quote on his Facebook page.

My entire adult life has been a study in individuality versus conformity. I can’t help but feel I’ve been the odd duck at every job I’ve had.

I remember when I was young and just out of college, working as an assistant in the marketing department of Buena Vista International at Disney Studios, Burbank. I spent the previous year making a half-hour, 35mm film which I wrote and directed, but hadn’t finished. It was a crazy, amazing, impossible feat built on the backs of a hundred or so craftsmen and artisans, everybody donating their time and talents. I had some wonderful actors involved (it was Chuck Connors’ last role) and I’d spent all the credit I didn’t have to put the film in the can. But I needed to reshoot a few scenes before taking it all into post-production, and I didn’t have a dime of credit left.

I took a chance and sent an inter-office memo directly to Jeffrey Katzenberg (man, am I dating myself) and two weeks later I got a call from the head of production. First thing he said was that I had a hefty set of balls. Then he told me that Jeffrey had forwarded my memo to him with a note saying, “Can we help this guy out?”

So, I had Disney on my side, but they could only offer free services on certain things, like time in the sound studio and foley rooms. I’d still have to pay for the sound editors and foley artists. And, since they rented their production equipment from other studios, I’d have to rent this equipment myself, at a discounted rate. Ultimately, things fell apart and the project died a slow and painful death (Chuck Connors called me once and said, “Schwartz, are you going to finish this film before I die?” A couple months later he died. I guess the answer to that question was, “No, Chuck, I’m not.”)

I was in the middle of this mess when my boss at BVI Marketing “took his business across the street,” meaning he left BVI to take a job at Universal. Shortly thereafter, a new President of Marketing came to Disney. In an effort to bond with his staff, he scheduled lunches at the Rotunda (special VIP-only restaurant at the studio) with everyone in the department. I met him for lunch and mentioned my aspirations to direct films, and the note I’d sent Jeffrey, and Jeffrey’s favorable response. The new president nodded sagely and then, at the end of lunch, said, “Remember, now. We’re in the business of marketing films, not making them.”

I went back to my lonely cubicle and posted his quote above my computer. I wanted to read it every day as a reminder that I did not fit in, that I was in the wrong place, the wrong job. This, at a time when Disney was pushing the word “Synergy” into every inter-office memo. Trying to convince us that we were one big, happy team. Home Video supported Marketing supported Distribution supported Production supported Public Relations. I’m surprised I never heard the phrase, “There is no ‘I’ in Synergy.”

Two weeks after my lunch date I was fired.

I always had mixed feelings when I left a job. I recall the scene in the movie Jerry Maguire when Tom Cruise is driving away from his job, singing Tom Petty’s “Free-falling” (“I’m freeeeee….free-falling…”). It’s a perfect metaphor. So free, before the fall.

It sucks being a team player, but just try making a living if you’re not. I’ve spent a good part of my life in sales, where the world is defined by Dale Carnegie (“How to Win Friends and Influence People”) and a thousand Carnegie off-shoots. Most of the popular business and management books include chapters on “Teamwork,” or “Corporate Unity,” or “Synergy.” Somewhere along the way some smart-ass came up with the phrase, “There is no ‘I’ in Team.”

I’m the square peg in the circular hole. I can talk the talk, but my heart won’t sign on.

For most of my life I’ve felt alone in my day jobs, wondering why I can’t seem to get with the program.

And then I became a published author. I met thousands of people just like me. They wore their “I’s” on their sleeves. Independence, individuality, integrity.

I feel comfortable in their company, as we all seem to come from a similar place. At the core we’re fragile individualists. It’s as though something in our past drove us to protect ourselves from the hypocrisy we observed. We learned early that we cannot trust what is written in books, and so we were drawn to write books of our own.  We understand the irony.  We don’t believe political ads or commercials or the narcissistic views of our employers.

We share the same struggle and plight. We balance our individuality with conformity. We join the Team while suppressing the “I.”