Today I’d like to welcome fellow Aussie author Lindy Cameron to Murderati. I met Lindy through the fantastic Victorian chapter of Sisters in Crime. A great woman who’s moved from author to author/publisher I thought it would be interesting to hear her story. Why did she start her own publishing company?  Over to Lindy… 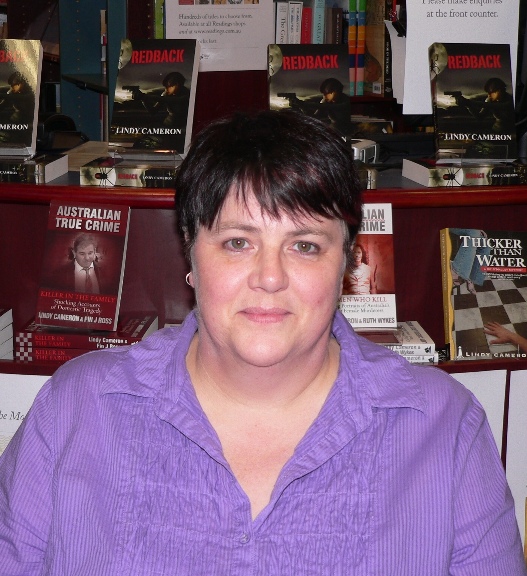 There are many things in the life of this author that try my patience. And the fact that I can actually do that, to myself, is somewhat ridiculous.

I am the Queen of Procrastination. And I say that like I am the only author who can say that, which is also ridiculous, because all writers mainline Avoidance like it’s a drug.

In fact, if you don’t find everything else to do but write, then you’re not really a writer.

Got a book deadline? Time to try out a new laksa recipe. Hmm, might have to wait until the zucchinis finish growing. Write another chapter while the stock is doing its thing – done. Oh look – the dog wants to go out; come back in; go out; eat the kitty litter. Finish chapter 10. Clean up the shredded six-pack of toilet paper. Start Chapter 11. Do a load of washing. Rewrite Chapter 11. Research just how that particular bullet will react with that metal after it’s gone through Bad Guy No 4.  Oh look – that Facebook meme about how to write is hilarious. No I really, really don’t want to change my power company, young man. Just because I answered the front door because, yes, I am AT home doesn’t mean I’m not working AT home. I’m a writer – damn it!

It is totally beyond me how I’ve managed to write five crime novels and co-write two true crime books, plus blah-blah-blah, in the last decade or so. And that always seems like a lot, until I realise I know some authors – like actually know them – who write one or two (egad!) crime novels a year.

And then I remember my biggest, weirdest and – as many people (including my partner and me) have suggested – craziest avoidance technique of all.

I started a publishing company.

I did this (in 2010) for a number of reasons. Mostly because I realised I had all the necessary skills to do something so utterly wackadoo – and in the middle of what everyone else was calling the GFC (whatever the hell that was).

I did it because I discovered there were two or 20 authors out there – apart from me – who were a little dissatisfied (understatement much?) with the Way of Big Publishers.

I managed this, in some cases, because I wanted to publish certain books – by those established authors, I mean – that their existing Big Publisher didn’t want to touch because they might confuse the author’s existing readership.

[Ooh, can’t possibly ruin our crime writer’s rep by letting them go all paranormal, or write a historical novel, or something with a pirate in it!]

As an Independent Publisher, I also set about finding new Australian crime and thriller writers; publishing the back lists of existing thriller writers; republishing out-of-print crime and historical fiction; mentoring debut authors; and seeking out sf, f, duf, h, c, tc, and all the other fabulous letters that go with being a ‘capital G’ Genre publisher.

Crime and thrillers are my first love – they are what I write, after all; when I do write, I mean; you know, when I’m not publishing; really, you need to go out again? Get off the cat! What?…

But in the third year of my little company, Clan Destine Press, I’ve also discovered I needed to add r, rr & e (romance, rural romance & erotica) to the list.

And there are also ‘trends’ which, as a publisher, one needs to be aware of.

One of the joys of being an Independent Publisher in the 21st Century is that we are not confined to paper.

Most of our books are paperbacks; but they are also eBooks.

Phillipa (PD) here again…if you’ve got any questions or comments for Lindy, go for it! Lindy and I will be dropping by!

8 thoughts on “The Segue”

@LeviFetterman @JudgeYouHarshly Yeah, glasses photo is a bigger smile than the smiley no-glass photo. Uh oh, Levi, are we basically saying, "You should smile more?"

@linwood_barclay Then you’re a good man.

@monwell571 Snoop and Dinklage just about did me in.

@blacklionking73 @HGLiterary @Flatironbooks That is ginormous and absolutely beautiful! Congratulations.

@linwood_barclay But does she make you hold her purse?