After months of indecision our family finally said goodbye in October to our 17-year-old chow-schipperke mix Jack.

And while we know putting him down was the right thing to do, there remains at times a bit of doubt and a fair amount of guilt.

No, that part–while absolutely no fun and definitely not missed–wasn’t that hard.  After all, he needed us to help him do these basic things.

What was tough was knowing how much pain he had to be in.  While he still ate and seemed happy to be alive, what kind of life was it, really?

But what was especially heartbreaking was looking into his eyes knowing that although he wasn’t our old Jack, he was “still Jack.”

The Jack who loved to have his ears rubbed.

The Jack who–when told to “take care of Betty,” our black lab who loved to escape through our apparently useless fence and roam, roam, roam–went galavanting with Betty instead of making sure she stayed home.  (In his defense, our instructions weren’t clear–he did take care of Betty while they were adventuring.)

The Jack who led a secret life for years before we discovered the truth.

While talking to our elderly neighbor several years ago, my wife learned that Jack would go to the neighbor’s house, where they’d visit with each other until she told him it was time to go home.  Then he would get up and leave.  Every day.  For years.

Were it not for that chat, we would never have known, because Jack was always home when we came home. Every day.  For years.  Lying around.  Usually asleep.

Then there was the time we came home to find a child’s handwritten note that said, “Your dog saved my life!!! He ran across the street and chased away a big dog that was scaring me!”  Jack the Hero.  Jack the Hero who was home that day when we came home.  Lying around.  Asleep.

Like Jack, we all have a secret or two.

Mine?  I write under a couple of pseudonyms.  And because a man has to keep some mystery about him, I won’t tell you what they are.  I know, I’m a bastard.

Now it wouldn’t be fair to ask you to give up your secrets since I didn’t. But if you are so inclined, how about telling us something about yourself that we don’t know?  Hidden talents?  Most embarrassing moment?  Your pseudonym?

26 thoughts on “The Secret Life of Jack the Bear” 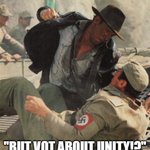 @bergopolis Fine. Put the Sedition Caucus on the record so they can be dealt with appropriately.

@broken_faeries @MollyJongFast So mote it be.

@MollyJongFast I really wish at least one or two of them would walk up to her on the House floor and go "here I am, bitch. Right in front of you. What you got to say now? Speak up, I can't hear you? What was it you had to say?"

But they probably won't. Sigh.