Like far too many Americans these days, I’m out of work.  Which is to say, I don’t have a day job that pays my bills.  I haven’t had one, in fact, for over three years now, or since I was laid off as a production artist for these people.  (The most rewarding and enjoyable work I’ve ever done, by the way.)

I’ve been in this position before, just as, I suspect, many of you have.  The writer’s lot, after all, is not generally filled with long, unbroken stretches of gainful employment.  So this vicious cycle of apply, wait, get rejected is nothing new to me.

Part of the problem in landing something is that I’m very rarely applying for the perfect job.  I apply for things I can do, and do well, but postings for work I know, absolutely know I could hit out of the goddamn ballpark are few and far between.

Go ahead and say it.  All together now: “Awwww, poor Gar!”

And that’s the proper response, of course, because there might be one person in every thousand in this world who holds his or her “perfect job.”  A job that is absolutely, ideally suited to one’s unique skill set and personal interests.  Everyone else, if they’re lucky enough to be employed at all, is doing work just for the sake of the paycheck.  Respectable work, maybe even enjoyable work, but work that falls short of making them deliriously happy, nonetheless.

Hey, there’s nothing wrong with that.

But, hell.  This is Wildcard Tuesday, isn’t it?  If a man can’t dream on Wildcard Tuesday, when can he dream?  Today, I think I’ll stand this whole job search process on its head and, instead of yearning from afar for the positions of my fantasies, I’ll just openly state my interest in them here and hope the right personnel directors take note.  What have I got to lose?

Here, then, are my seven Perfect Dream Jobs:

I’ve shown my mad man-love for Clint Eastwood’s seminal Harry Callahan character here before, so it should come as a surprise to no one that I’d love to write the last—and it would, sadly, have to be the last—cinematic chapter in that series.  Eastwood’s reluctance to play Callahan again, at this late stage in his life, is understandable, but I think I’ve come up with a story that addresses all the credibility issues such a sequel could present.  All I need is a phone call from Malpaso to run out to the Warners lot and pitch it to the man himself.

It would make my day.

Maher can be a sexist ass at times, but when he’s on, he’s funny as hell.  While, generally speaking, we see eye to eye politically, I think it’s the thing we least have in common that would make our partnership a winning one: Maher’s a raging atheist and I’m an imperfect Catholic.  Sometimes, when worlds collide, funny happens.

I’m down to write a few New Rules if Bill’s willing to give me a shot.

Television and I don’t often get along, I must admit.  The only two series I’ve ever written for taught me I’m about as well-suited for turning out standard boob-tube fare on a timely basis as Rick Santorum is to be a tattoo artist.  But given the right, smart, kick-ass show to work on—say, one not only based on a character created by Elmore Leonard, but actually committed to representing that character faithfully—I’m sure I could churn out a teleplay or two worthy of WGA accreditation.

Publisher’s Weekly once called one of my standalone thrillers “the best Elmore Leonard rip-off since Elmore Leonard,” and I’ve never been prouder of a potential blurb in my life.  If I can do it in prose, why not in television?

I don’t often mention it here, but I am a crazed fan of the Los Angeles Lakers, and more than once I’ve used the team’s victory in a championship series to strut my stuff as a poster art designer.  For instance:

My skills as a renderer are severely limited—I can only draw something with any degree of accuracy if it’s sitting directly in front of me—but I wield a mean copy of Photoshop.  Should Kobe and company find a way to win it all again this year (and right now that seems rather unlikely), I’m sure I’ll create another masterpiece suitable for framing just to celebrate their achievement.

But I’d much rather do it not as a sycophantic fan, but as an employee on the Lakers payroll.

Audio Book Reader for the Works of Daniel Pinkwater

As stated here, Pinkwater is a favorite author of my entire family, and I used to get a real kick out of reading his wacky books aloud to my two youngest children at bedtime.  I’m quite a ham, as anyone who’s ever seen me perform at conventions can attest, so I never did fewer than six different voices when reading a Pinkwater book.  It was loads of fun, and the idea of getting paid to do it all over again, for middle-grade readers around the globe, damn near moves me to tears of joy.  Hamlet?  Forget about it.  But a Daniel Pinkwater recital?

Book Cover Artist for the 6.4 Million Self-Published Authors Who Desperately Need One

Los Angeles Lakers championship posters aren’t all I like to design.  Every now and then, I try my hand at doing book covers, as well.  Severn House had their own ideas several years ago regarding the cover art for my novel CEMETERY ROAD, and fine ideas they were, too, as things turned out.  But before the ink was dry on my book contract, I’d created two mock-ups based on ideas of my own.  Like this one:

Most recently, I did the cover art for SHAKEN, the short story anthology Tim Hallinan put together to raise funds for the earthquake and Tsunami victims in Japan last year: 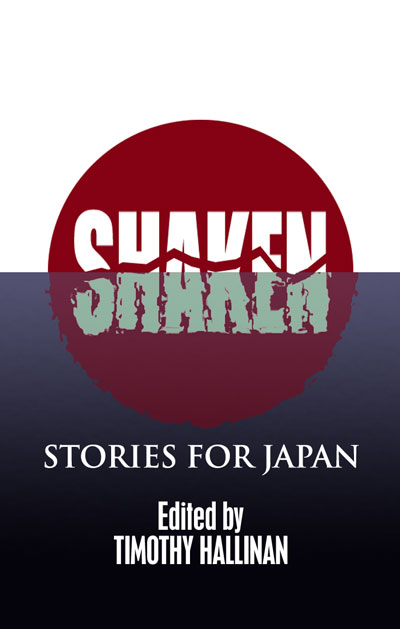 Again, as I admitted in my paragraph about Lakers poster art design above, I can’t do everything a real artist can do.  But give me a premise and a subscription to a few good stock photography sites, and look out.  I can be dangerous.

An Actor on The Good Wife

Okay, I’m no Sir Laurence Olivier, but I’ve got a pretty face and I once had a speaking part in an Audubon Junior High School production of The Pajama Game.  Plus, I have real on-screen presence, as this clip from the book trailer for Michael Connelly’s ECHO PARK clearly demonstrates:

No, I couldn’t carry a show of my own, but I think I could handle playing Archie Panjabi’s latest love interest quite easily.  Or a witness being grilled in the courtroom by Julianna Margulies.  A FedEx guy delivering a package to Christine Baranski?

How about a lawyer being fouled by Josh Charles in a basketball game at the gym?  You haven’t heard someone cry “And one!” convincingly until you’ve heard me cry “And one!”

What about you, my fellow ‘Rati?  What are some of your Perfect Dream Jobs?

9 thoughts on “THE RIGHT MAN FOR THESE JOBS”