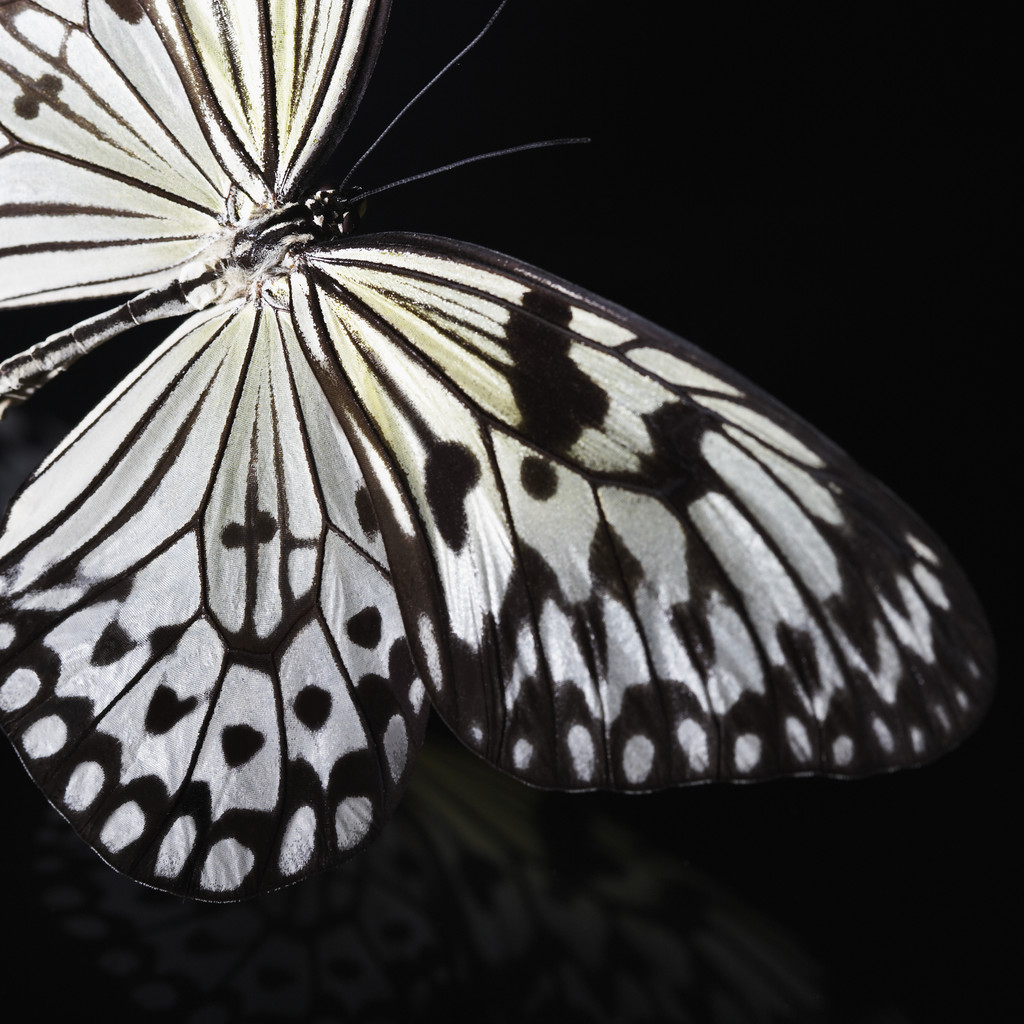 Part of an author’s life is publicity. And, let’s face it, for the most part publicity is fun! You write in a cocoon for many, many months and then you emerge and get to flap your wings and show off all the pretty patterns. Well, it’s kind of like that.

For many authors, I know publicity can be a drag. For the shy, retiring type of author, publicity can be daunting and scary. Then there are the really, really big authors who do world tours and get a few weeks taken out of their writing schedule each year. They’re shepherded from city to city, country to country and plane to plane. I can see that after the first world tour (or maybe the tenth) that might get a little old.

For most of us, the publicity rounds are more sedate. And it depends on your publishing house and publicist too. My five books are released in Australia through Pan Macmillan Australia. They assigned me a fabulous publicist and for the two weeks around the launch of each book I’d block out time for media interviews. Lots were over-the-phone radio interviews, but then also some print stuff with the occasional photo shoot. However, in the US I didn’t have a publicist and so the publicity and media stuff was pretty much non-existent. The other weird thing about publicity is that by the time a book is released, you’re already well into writing the next book. So you have to get your head out of the current WIP and back into your last book.

But that’s not what this blog is about…today I want to talk about the best photo shoot of my career to date. And it’s not to publicise an upcoming novel. Next month, 7-9 October, I’m part of an Australian crime convention called SheKilda. It’s only the second of its kind (the first/last one was 10 years ago) and I’m hoping it’s going to be like Bouchercon for Aussies. It’s being hosted by Sisters in Crime Australia, so it’s only female crime writers (authors, journalists and TV writers) but there are still over 70 authors on 35+ panels. Needless to say, I can’t wait!!!!  I’m using the pun – a killer weekend.

But I’ve digressed again. So, a couple of weeks ago, as part of the publicity for SheKilda, I was asked to take part in an interview with two other Melbourne-based authors, Angela Savage and Leigh Redhead. First I went into city and talked to the journalist over coffee, then the next day we met at the Victorian State Library for the photo shoot. The theme: modern-day Cluedo. The three of us had to pick a colour – my first difficulty. You see, like many Melbournians about 90% of my wardrobe is black. Anyway, I managed to hunt out some purple and so I was Professor Plum (in the library – literally).

The first pose was on a Chesterfield with magnificent lights in the background. Angela Savage lay on the lounge with a dagger, Leigh Redhead had the gun and I had a magnifying glass. The second pose was Leigh lying on the lounge, me lying on the top of it (balance was required, people!) and Angela behind us, looking a little too excited to be holding a rope in her gloved hands. This one made it into the article and I also got a way less slick pic on my little camera.

Next we were near an old marble staircase. I was sitting, magnifying glass in hand (I sooo wanted a gun) and Angela and Leigh were behind me, backs against the wall like they were about to kill each other (or maybe me). That one made the front cover of the Melbourne Times Weekly and is also the pic featured in the online version. 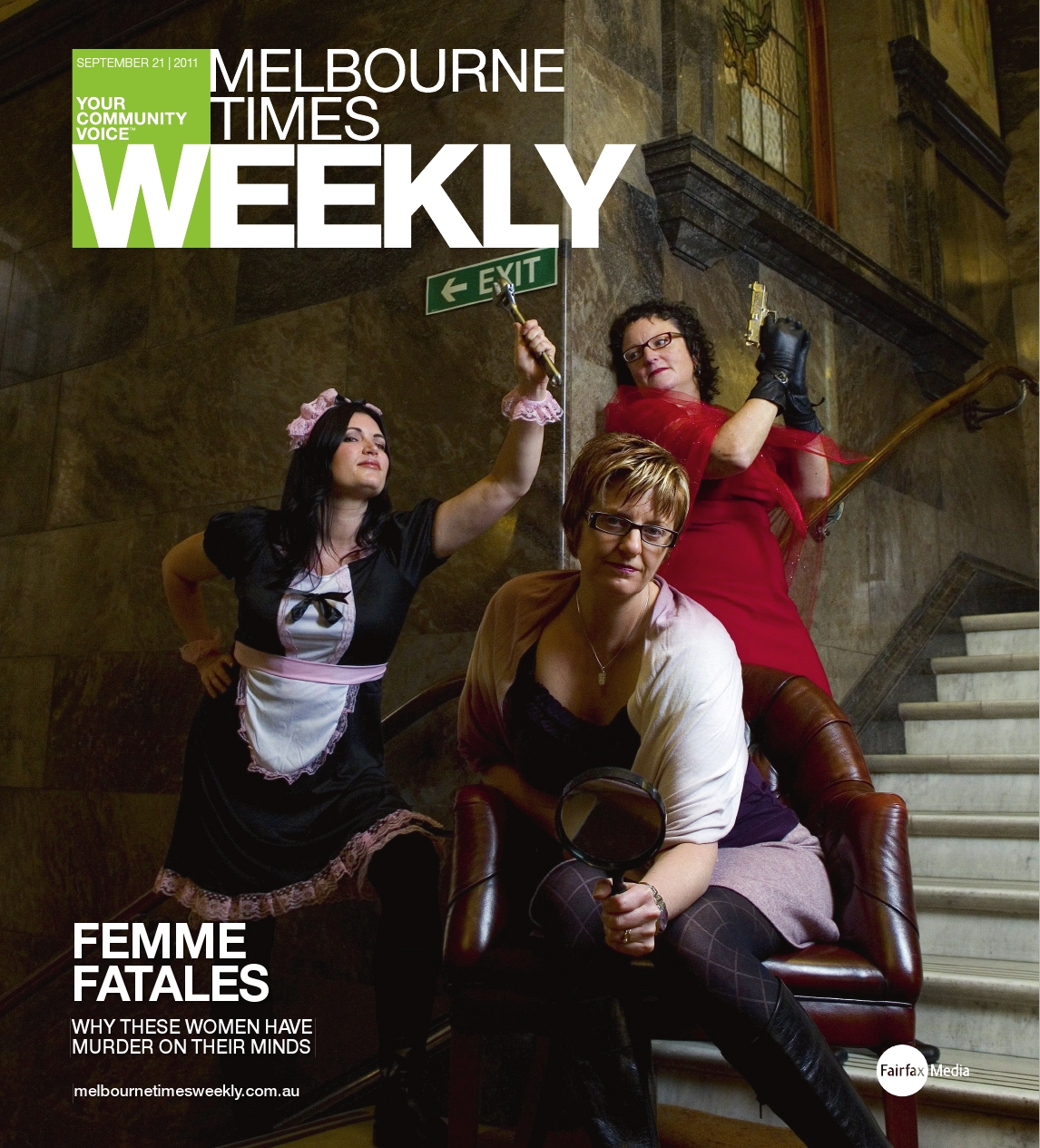 Then we did a Charlie’s Angels style pose. Again, I got one on my camera. This was a special moment for me, because I was able to play out one of my childhood fantasies — I was one of Charlie’s Angels! Sad, but true 🙂

I don’t know if you can see it in the pics, but it was a seriously fun shoot. Angela, Leigh and I were like excited school girls – with fake guns, knives, etc. And while most photo shoots take 5-15 minutes, this one went for nearly two hours!

It’s all in the look
When you’re posing for photos, it can be hard to work out what expression to use. Even though we were having fun and getting into it, do you go for sexy? Serious? Smug? Leigh and I joked about the classic crime writer “look”. Crime authors need to refine a little sexy smirk that says: “I know something you don’t know.” And the thing we know? Whodunit. And that’s kind of important in a murder mystery.

Anyway, thought I’d share this fun photo shoot with the Murderati gang! For those of you reading this blog in Australia, please get yourselves to Melbourne 7-9 October! We’ve already got people coming from interstate and of course around Victoria. And tell all your friends about this amazing event. I’d rather not wait another 10 years for the next one, which means this one has to be a HUGE hit 🙂

To the authors out there…what’s been your most fun publicity event/piece? To the readers and aspiring authors…do you think you’d like the PR side of writing?

16 thoughts on “The photo shoot to kill for”