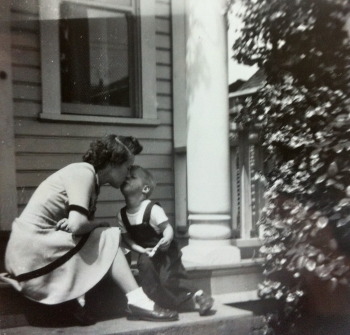 Bruce Goronsky and his mother, 1951

Today, March 29, is the one year anniversary of my husband Bruce’s death. It seems so much shorter than that. But so much longer at the same time.

I’m finally back from all my travels to Australia, Arizona and Seattle and maybe … just maybe … ready to think about the next steps.

Six months ago, my brother, Jim, asked me if I was getting back to normal. “What is that? What does that look like?” I replied. There was nothing normal about my days and my future would be different than I ever imagined. I would never be normal again, but somehow … just maybe .. there might be some kind of New Normal ahead.

Like any other endeavor I’ve ever approached, I tried to get as smart about widowhood as I could. I read countless tales of previously strong women bowed by the unexpected loss of a spouse. Joan Didion’s “The Year of Magical Thinking,” Joyce Carol Oates’ “A Widow’s Story,” Genevieve Ginsburg’s “Widow to Widow.” They may have proved that I wasn’t crazy, but they also showed that I sure wasn’t handling this well.

So many people tried to help. My old advertising friends, Judy Hughes and Barbara Pauly, whose memories about losing their husbands haven’t faded over the years. David Corbett and his frequent emails giving me permission to handle this however I had to in order to preserve my sanity. Linda Ronstadt with her constant invitations to dinner, to a walk, to help around the house. Pat and Karen Scott who took the burdens of my in-laws in Seattle as their own. David and Sara Arnold next door who continue to feed me now just like they did when Bruce was sick.

Neighbors and cousins and email friends, you’ve all done your best.

But eight months into this new life I found myself not getting better, and only getting worse. I shuttered myself indoors and would not bathe or dress for days at a time. I quit answering the telephone. I wouldn’t leave the house if I ran out of food: a paucity of cigarettes, wine or toilet paper was about the only call to action.

I cried every Monday at 8:05 a.m., remembering the 36th Monday without him … then the 37th. Then the 38th. I cried yesterday, too, although I know that the rest of the world will call him gone a year today. What a world we live in where there are 52.14 Mondays in a year.

I broke down when the lady at the Mammography Center asked if Bruce Goronsky was still the emergency contact she should list on my medical forms.

I lashed out at acquaintances who asked if I was dating yet.

I have not been the model widow. Nor am I Mrs. Bruce Goronsky anymore.

But I’m not Louise Ure again yet, either. 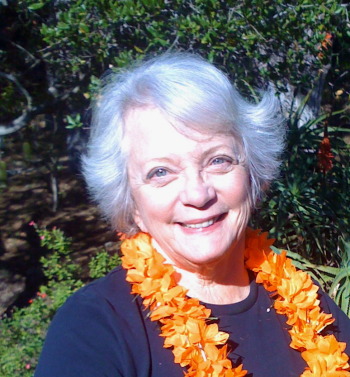 First, Jude Greber, who not only made me laugh the day we went to the mortuary to arrange for Bruce’s cremation, but whose constant, gentle support has carried me every day through Bruce’s illness and now through this new chrysalis of widowhood with emails, long visits and even more frequent meals. Her message: DON’T FORGET, YOU’RE A WRITER AND YOU HAVE FRIENDS.

Second, Maggie Polling, my old friend from Australia who opened her home and her life to me these last several months. She wanted to come take care of Bruce but I wouldn’t let her. Then she wanted to come for the funeral, but I thought that hosting an out-of-towner would be too grueling. She finally came to travel with me to the memorial car race the SCCA put on in Bruce’s honor; I couldn’t have attended without her. Then she taught me how to breathe again in Australia. She is closer to me than a sister. Her message: WE KNEW YOU AS LOUISE LONG BEFORE WE EVER KNEW BRUCE, BUT WE LOVED HIM, TOO. 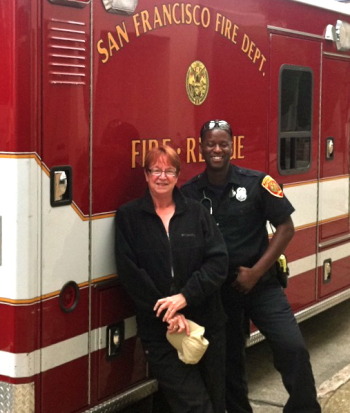 And finally, my foster son, Brian Washington. How can I ever thank him? He sat by my side those long hours in the hospital. He took me home when Bruce’s last lap was run. He bought me a cookbook called “The Pleasure of Cooking for One.” He calls and comes by every week, offering love, lunch and a change of light bulbs if I need it. I could not ask for a better son if I had birthed him myself. His message: YOUR FAMILY IS HERE FOR YOU.

I can’t promise that I’m over this fever, but things have started to become more gray than black. I wake with plans for the day, even if those plans are sometimes just to make lunch or go to the post office.

I can still get caught short by the strangest, most unexpected sadnesses. I still have to mute the television when one of the Cancer Society’s “Happy Birthday” ads comes on. False advertising I call it, and rubbing salt in the wound. Bruce didn’t even get a quarter of a year.

Then just this week Bruce’s father asked if I would send him Bruce’s wallet as his own is well-worn and falling apart. I tried to do that and again broke down noting that Bruce’s credit cards had longer expiration dates than he did. And the wallet still holds the curve of his butt. I think I’ll send my father-in-law a different replacement wallet and hope he understands.

This anniversary, like so many other benchmarks I’ve passed this year, is neither completely happy nor sad. I’ve begun to remember the good times we had and not just the last hours in the hospital. I’ve even laughed a few times.

The Vietnamese lady who does my fingernails lost her father in the same hospital on the same week I lost Bruce. She told me yesterday that she and her family prepared his favorite foods on the anniversary of his death and added a plate for him in front of his picture at the head of the table. It’s a lovely idea. Maybe I’ll do the same, even though a bowl of chili with cornbread doesn’t sound all that festive.

But while I’m remembering Bruce today, I’m also remembering and loving each of you who have given me so much this year. You have my heart.

42 thoughts on “The New Normal”