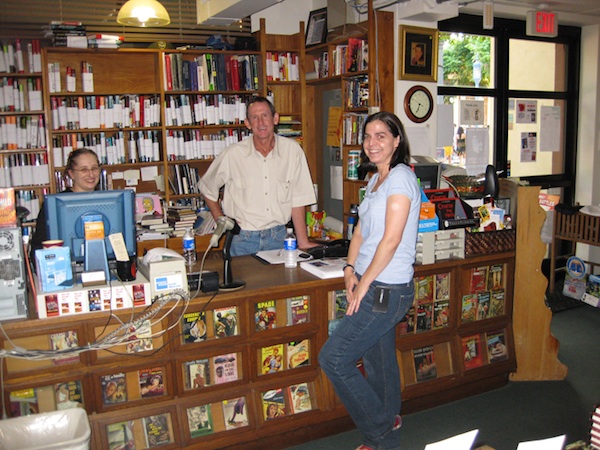 (Ingrid, Bobby and Linda at the front counter of the Mystery Bookstore)

On Tuesday, word spread across the Internet about the closing of the Mystery Bookstore in West Los Angeles.

The news hit me particularly hard – as I’m sure it did for most L.A. based authors. The Mystery Bookstore has been our “local”, to use pub terminology, the place we think of as our home store. Every single one of my books so far has had its launch signings there. In fact, until the announcement, my upcoming March release of THE SILENCED was also to have its launch signing there. But, sadly, is not going to happen now.

But this post is not an obit for this fantastic store. It is a remembrance and a flickering candle that maybe this is not the end.

Those of you who have been to the Mystery Bookstore know that its strength is its incredibly knowledgeable staff headed by Bobby McCue and Linda Brown. Tell any of the employees there what kind of books you like, and you’ll get recommended more choices than you know what to do with. They are just that good.

The thing that has been most important to me, though, is the store’s support, not just of myself, but of the whole mystery and thriller community.

But, if you’ll allow, a quick memory…

The first time I walked in the store was right after New Years, six months before the release of my first novel, THE CLEANER. I was a nervous first timer, and I almost left without introducing myself. Thankfully, I did. Bobby and Linda were immediately excited for me, and told me to make sure my publicist at the publisher contacted them about a launch signing. We talked books, and the industry, and the community. I didn’t walk out of there, I floated. 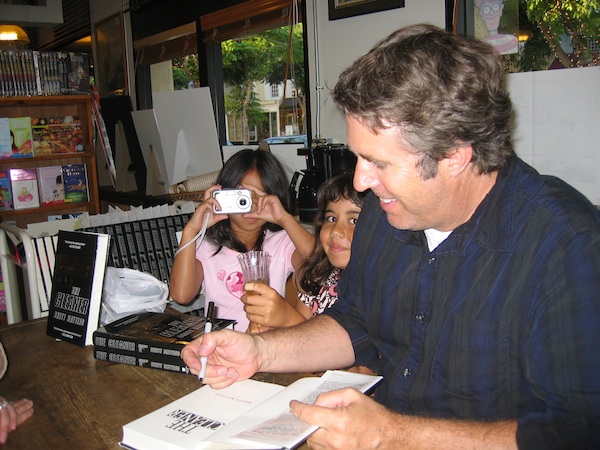 (My daughters and I at my very first signing at the Mystery Bookstore.)

To think the store won’t be there after January 31st for me to drop in on is incomprehensible.

Yesterday, I took a break from the book I’m working on, and drove over to the store. Bobby wasn’t in, but Linda was there, as was Pam who owns the store with her husband Kirk. Since purchasing it, they have been as diehard supporters of the genre and of me as the rest of the staff have been, and I know they have worked tirelessly to try to make things work.

I could see the strain of the decision in Pam’s face. I could hear it in her voice. This was not something that came easy.

I knew this wouldn’t be my last time at the store before it closes, but it would be one of them. I expected it to be a sad experience. But, on the whole, it wasn’t . Yes, they are closing, but all hope is not lost.

Pam and I talked for, I don’t know, maybe fifteen or twenty minutes, and I learned that they are still trying to figure out ways to make the store live on. No, not as it currently exists. That’s over. As Pam said, and I won’t get this quote correct, the business model for the independent bookseller just doesn’t work anymore. At least, not in their case, and I have a feeling not in most.

But given that, she also thinks that doesn’t mean a viable model can’t be found. She and her husband Kirk have been racking their brains to come up with creative solutions. To that end, author Lisa Lutz, has grabbed the bull by the horns, and has been trying to come up with some ways to make things work. I’m told in the past 48 hours, she and Pam and Kirk have been trading ideas, and looking for alternatives. If you haven’t already read what Lisa has posted on her own blog, you’ll find it here.

I told Pam that I was going to blog about the store today, and she said to let people know that this is hopefully not the end, and that if anyone, ANYONE, has ideas that might help them find a viable way in this new book world order, to let them know.

Who knows? One of us may have a solution that will not only help the Mystery Bookstore today, but other of our favorite bookstores that may be facing now or will face in the future similar issues.

Also, if you are in L.A. on January 31st, there will be a party at the store that starts at 6 p.m. I’ll be there. I know a lot of other authors (including some here at Murderati) will be there, too. Join us, and let’s celebrate this icon of our community.

So this is how wonderful the Mystery Bookstore is. As I was talking to Pam, Linda was helping a customer who was looking for books for a friend that were similar to a certain author. He walked out with a copy of my first book thanks to Linda. And she didn’t do that because I was there. She would have done it anyway.

That’s all. No questions today, but solutions are always welcome.

17 thoughts on “The Mystery Bookstore”