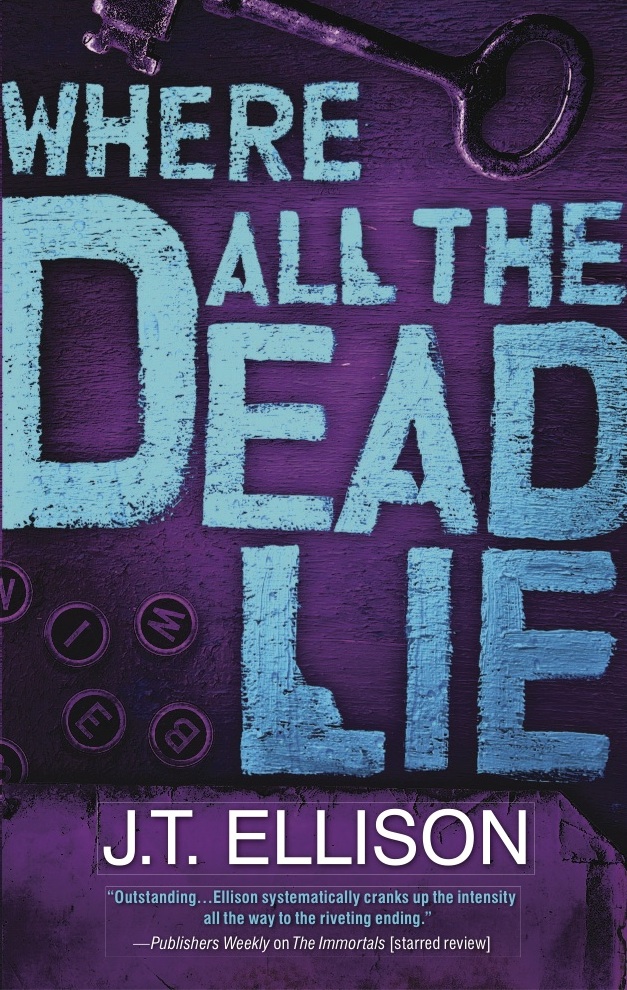 I have a new book out on Tuesday. And since I’m at Bouchercon today, I thought I’d take this moment to share with you the journey I went on writing WHERE ALL THE DEAD LIE.

(Journey? It was more like a hike up Everest, K9, and Rainier, all in a week.)

But back to the book’s inception. I’d just returned from vacation, and had an unbelievable amount of work on my plate. I was getting ready to shoot the video for the OWN Network, so my thoughts were not exactly on writing as much as what I would wear. I was revising THE COLD ROOM, which was three books ago. I was starting to work on THE IMMORTALS, and slightly fleshing out a concept for SO CLOSE THE HAND OF DEATH. I was not thinking four books from that moment. Not at all. And yet, I was in the car, and heard a song by Tori Amos called “Welcome to England.”

And I saw Taylor stepping off a plane at Heathrow, into the waiting arms of Memphis Highsmythe. You may remember Highsmythe from THE COLD ROOM, the wounded Scottish Viscount who joined the Metropolitan Police of London – New Scotland Yard – a man who in many ways mirrors Taylor – the privileged upbringing, eschewing their parents’ wealth and influence to strike out on their own, a sense on longing, of solitude, even when surrounded by loved ones.

I was curious about why she would do such a thing, but knew I’d have to explore the idea. So I made myself some notes and put the idea away so I could focus on what was at hand.

But ideas like this, so big, so different, wend their way into your psyche. From that moment forward, I was writing toward this book, even though I wasn’t consciously doing so.

When it was time to start working on Dead Lie, I knew much more about the reasons for Taylor’s flight to England.

She’s been grievously injured. She’s not healing. She can’t work. She is deathly afraid of what all of this means.

And most importantly, she can’t talk.

Having a mute protagonist was terrifying for me. Dialogue is a hugely important part of my books, the interplay between Taylor and her team, her lover, the victims of the crimes she investigates – it’s not something I wanted to take from her. But I had to. She had to be forced into a corner and fight her way out. Not fight against a villain, but against herself.

And I wanted it to be more than that. This tale is very much a version of the classic fish out of water, a person set into an environment that is unfamiliar, unsettling. I knew I wanted to set the book in Memphis’s world, London and Scotland, with the Scottish Highlands as the backdrop, at Memphis’s ancestral home. His haunted castle. His Manderley.

Suddenly, I was writing a gothic. In the vein of Du Maurier’s Rebecca.  Complete with a questionable housekeeper, an errant friend, a dead first wife, and a serious case of PTSD.

When you’re used to the blistering pace of a serial killer thriller, and the ease of writing a mouthy protagonist, having both those crutches taken away from you is at once both scary and liberating. All the rules I’d followed in the books that came before were thrown out the window. I knew I wanted this to be a stand alone – even seven books in – especially because it’s seven books in. And it’s the first book printed in the trade paperback format – so it’s a chance to reset, if you will.

But well before the marketing decisions were made, I was struggling. The story was unfolding in ways I didn’t like. I kept returning to the proposal I’d written, in June of 2010, trying to find the thread that would lead me through.

The truth was, I was scared.

I’m still a relatively young writer – young as in this was only the eighth novel I’d written. I’d just lost my beloved editor, I was trying a completely new genre, and the resistance I was feeling, all self-imposed, of course, was stifling. As much as I wanted to tell this story, I just didn’t believe in myself. I didn’t think I could do it justice.

On the surface, everything was flowing wonderfully – I took two trips to Scotland for research, both of which were amazing – I highly recommend setting books in other countries so you’re forced to go outside of your comfort zone to make the stories come alive. I loaded the book with the things I’d seen – the setting wasn’t ever the problem. It was the story. Despite my proclamations to have a gothic, I kept trying to sandwich in a serial killer subplot.

While I was in Scotland the first time – the Peter Tobin case broke. Tobin is a Scottish serial killer who killed several women and was sentenced to life in prison. While we were in Scotland, the police connected him to Bible John, a serial killer from the 70s.

Now, the possibilities there were endless. And eerily reminiscent of Nashville’s own Wooded Rapist, who worked across town with a different MO and moniker – the Dome Light Rapist…

So I tried to dump all of that into the book, thinking the straight suspense wasn’t going to work.

I was wrong. The serial killer aspect of the book was terribly distracting. In the end, I cut the whole subplot.

There was a second subplot that disappeared – the story of John Baldwin’s son. Too much information, too little space to have it.

And still the book wasn’t working.

I’ve never walked away from a story before, but I nearly abandoned this manuscript several times. The thing about art is recognizing when something isn’t working, and giving yourself permission to walk away.

But I’m stubborn. And I loved this story.  I loved Taylor’s frailty. I loved the backdrop of Scotland. I loved that my incredibly strong heroine was seeing things, hearing things, being driven to the brink of insanity.

And that she had a true attraction to another man.

So I focused all my energy on Taylor and her forbidden relationship with Memphis.

I listened to the feedback form my beta readers, and then wonderful new editor.

And two days before I was due to turn it in, the book came to life. After a looooooong conversation with one of my best friends, in which I expressed my desire to toss the book out the window, she said something that made me see all the missing pieces. I rushed through a full revision in two days, and boom, there it was.

You’d think that the more books you write, the easier it gets. The better you get at telling stories. The quicker you can lay down your ideas.

Writers can be incredibly myopic. That’s why we have editors and beta readers and critique groups. It was my tribe that helped me see the forest for the trees in this one. And once I could see that forest, everything was so plain. I just needed to get out of my own way and let Taylor be the star. I’ve always seen her as unassailable. Perfect. Larger than life. In WHERE ALL THE DEAD LIE, she is flawed. Physically and emotionally flawed. Weak, even.

And so much more interesting for it.

And here we are – eight revisions later – with a new baby being born. Makes it all worthwhile, really.

I have a few more stories about the writing of this book on the Tao of JT, plus a contest, so stop by and check things out! Or buy your copy now! Remember to support your indie bookstores too!

Wine of the Week: Ca Veja Nebbiolo d’Alba  We had this bold, rich wine last night – it was perfection!

Where All The Dead Lie Trailer from JT Ellison on Vimeo.

13 thoughts on “The Lifecycle of a Novel”