Confession: My favorite part of every posting was picking the music for the end.

When I was a kid, I dreamed of being a DJ, and I’d actually record myself on my eight-track spinning singles in my basement, introducing the bands, announcing the tunes, every now and then venturing a particularly catchy B-side (God, am I dating myself).

Later, I was one of those geeky dorky dweeby dudes who couldn’t share mix tapes and CDs fast enough. I have two friends who say they almost need entire rooms—or outbuildings—to warehouse all the music I forced on them. I always saw it as the perfect postcard, the best way to say hi and what’s up and lay my own trip out there without getting too, well, weird.

But hey, I’m weird. Just check out the tunes, you know that much.

I always got a kick out of sharing some of the obscurities I posted here—yeah, that’s me, the guy who’s always into “the best kept secret in …” (which explains my writing career, in more ways than I’d like to admit).

And so, in trying to determine what tune should conclude my stint here at Murderati, I was my usual exuberant, over-indulgent self, having too much I wanted to share, and only one last chance to do so.

So postmark this one, save it for later, play it in bits. This is my Murderati Mix Tape, with samples of a handful of the bands and singers and songs I had bookmarked to share but never got the chance, such as:

Ani DeFranco singing “(Fuck You and Your) Untouchable Face”

One Nation with Victory covering Roxy Music’s “More Than This”

The Sons of the Pioneers singing “Tumbling Tumbleweeds”

The Bobby Fuller Four performing “Let Her Dance” on Shivaree

Meg Hentges with the gay teen anthem “This Kind of Love”

Noel Coward (God, what a voice): “I Went to a Marvelous Party”

Bryan Ferry covering the Everly Brothers’ “The Price of Love”

Willie “The Lion” Smith performing the breathtaking “Echoes of Spring”

Brazil’s Nação Zumbi (what The Who would have sounded like if Pete Townsend were Brazilian, not British) performing “Hoje, amanhã e depois”

And finally (for this set), this old chestnut titled “The Cruel Sea” performed by The Dakotas, from that bastion of surf culture, Manchester UK (yes, this one’s for you, Gordon):

There were, of course, also songs with a crime theme I wanted to share, such as:

Anita O’Day with the Stan Kenton Band: “And Her Tears Flowed Like Wine”

Steely Dan: “With A Gun”

The (okay, not so obscure) O-Jays: “For the Love of Money”

Richard Thompson: “1952 Vincent Black Lightning” (how does he sing and play like that at the same time?)

Alabama 3 with the theme from The Sopranos

Anita O’Day (again), this time with the Gene Krupa Orchestra: “Murder He Says” 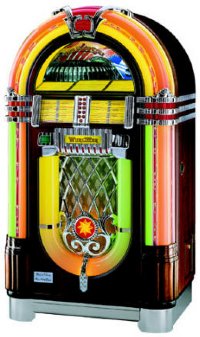 And then all the sad goodbye songs I thought might bring a tear, a chuckle, or a sigh:

Bettye Lavette with “Let Me Down Easy”

Shivaree (the band, not the TV show): “Goodnight Moon”

John Lennon. “You Don’t Know What You Got (Till You Lose It)”

Otis Redding: “You Don’t Miss Your Water (Till Your Well’s Run Dry)”

Raul Malo (again—God, what a voice), this time with J.D. Souther’s “You’re Only Lonely”

Jimmy Buffett and Roy Orbison, “Beyond the End”

Emmylou Harris, with a song by Steve Earle, produced by Daniel Lanois: “Goodbye”

And with that, I bid adieu to all of you in this, my Murderati incarnation. I’ve made a lot of grand friends here, friends I intend to cherish in other formats and other locales, on the Murderati Facebook Page and beyond—beyond the end.

The Final Jukebox Hero of the Week: Who else, with what else—and a tease for Stephen’s final post this Friday: