I declare the race for the Academy Award for best performance by a female actor at next year’s Oscar ceremony over.

It’s done. Everyone else can go home.

I’m sorry Meryl, that little bio pic where you entirely transform into someone else? Not going to work this time. And Sandra, you got yours last year. Julia, Helen, Helena, Kate and all you other fantastic actresses, feel free to take the year off. This is one fight you don’t want to take on because you will lose.

Okay, you might have one little out. Defeat or victory will, unfortunately, hinge on Academy eligibility requirements. If nominations are based on a film’s release date in the US, then all is well. But if they are based on when the film was first released in whatever country it was made, then – no disrespect to Sandra Bullock – the Academy has already made a fatal error.

And not just a “Oh, I took a wrong turn” error. More of a “There’s never been a bigger mistake in the history of the Academy” type error.

Last Saturday I saw what was quite possibly the best performance by any actor that I have ever seen. Seriously. I’m not joking.

And the Oscar goes to: 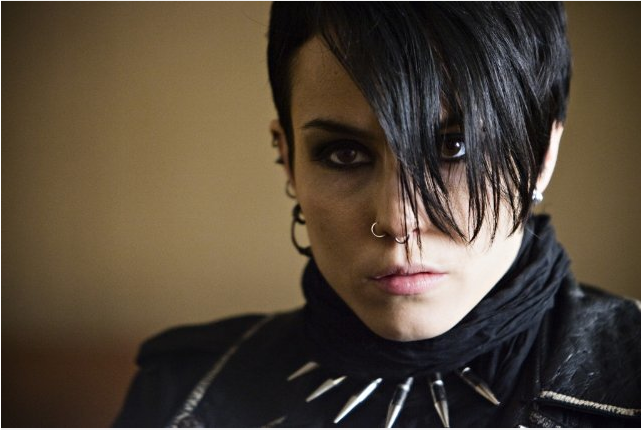 I mean right now. Stop reading this, head to the theater, and see it. I’ll wait until you come back.

Noomi (if you’ll allow me to call her by her first name) plays Lisbeth Salander, an emotionally damaged social outcast with more than a little skill at solving mysteries. If you had asked me after I read the book who could play the part, I would have had no answer. In fact, I probably would have said, “I doubt anyone could really pull Lisbeth off.” I mean Lisbeth goes through some pretty serious stuff. I mean brutal, cringe-worthy stuff.

And guess what? I would have been completely and utterly wrong. In the words of the popculturenerd on twitter the other day: Noomi Rapace IS Lisbeth.

I couldn’t have said it better myself. Noomi’s performance is so compelling and captivation and, above all else, so brave your eyes are riveted to the screen every moment she is there.

It happens rarely where an actor and a part fit so well together that you can’t even imagine for a split second anyone else playing the role, but this is one of those times. And it’s not just a perfect fit. Noomi’s performance is so mesmerizing that I’m still thinking about it days and days after seeing it.

The only problem I see with my crusade to nominate Noomi (which I alluded to above) is that while TATOO just came out here in the States, it was released in Sweden LAST year. So does that mean she should have been nominated for this last ceremony? If so, the Academy completely screwed up. (Again, no disrespect to Ms. Bullock. She’s a fine actress whose performances I’ve enjoyed immensely over the years. But I’m sure if she saw THE GIRL WITH THE DRAGON TATTOO she’d think the same thing.)

You know what? I don’t care what the Academy rules are. Noomi Rapace should be nominated, and win, next year. And if the Academy has a problem with that? Fine. Then just nominate her for THE GIRL WHO PLAYED WITH FIRE which comes out soon, or even THE GIRL WHO KICKED THE HORNET’S NEST which I don’t even know if they made yet (according to imdb.com, they have). Noomi’s performance demands it. And I’m not going to stop telling people that. (UPDATE: A little web research and I would have learned all three movies are already done – great work there, Sherlock – but the NEW NEWS is info on when those will be released in the US. The answer is soon! Link here.)

So make it happen, Academy, or feel my wrath!

You can read Roger Ebert’s review of THE GIRL WITH THE DRAGON TATOO here.

You can read popculturenerd’s review here.

And read more about the film here.

And just a final thought for the director and producers of the American version of THE GIRL WITH THE DRAGON TATTOO, instead of “going safe” and picking an American actress (rumors are out there that Kristen Stewart is up for the role), why not get Noomi Rapace to play the part again? She would TAKE THE U.S. BY STORM if she did. She would become a mega-star. And if the “but she’s Swedish and probably can’t speak English well” thing worries you, that’s just ignorant bullshit. Check this video out and tell me she can’t speak English well (thanks pcn for the link.)

So Hollywood, I swear to God, if you screw this up, I’m coming after you. I know where you are. I’m just a ten minute drive away, and I know how to make bodies disappear…okay, fictionally, but you get the idea.

26 thoughts on “THE GIRL WHO SHOULD BE NOMINATED”