When I was a kid, our next door neighbors were our best friends.  The Ruckers had five kids, so I never went without someone to hang around with.  My buddy Cricket and I did everything together, and when school started and Cricket got too old to be hanging around with a pipsqueak like me, I started hanging out with his younger brothers Jack and David.

Our parents were best friends as well.  I remember many a night when Bob and Bonnie Rucker came over to play cards, or to take late night swims in our pool.  It wasn’t unusual to come home from school and find Bonnie and my mom having coffee at the dining table, gossiping about god knows what.

There was a lot of drinking and listening to music.  My parents used to get albums by the 101 Strings Orchestra and they’d put it on as background music as they played canasta with the Ruckers and laughed until their stomachs hurt.

After hearing one of my dad’s albums, Bob decided to go out and get a 101 Strings Orchestra record himself, and one night came over with The Soul of Spain.

Unfortunately, when they played the thing, they all agreed that it was terrible.  Probably the worst album they’d ever heard.  Bob tried to give it to my parents, but they told him thanks but no thanks.

But Bob conveniently forgot the album that night and refused to take it back when my dad later tried to give it to him.

My dad being my dad, he decided Bob was going to get it back whether he wanted it or not.  So one afternoon, he sneaked over to Bob and Bonnie’s house, stuck the album in their stack of records, then went about his business.

Days passed, with no word from Bob.  Then one night, as my mom and dad were climbing into bed, they found the The Soul of Spain peeking out from under my dad’s pillow.

I have no idea how long this went on.  Weeks?  Months?  Years?  All I know is that album mysteriously appeared in various places around both houses, went back and forth more times than anyone remembers, was even sent through the mail at one point (addressed to “Jeff” Rucker) and became a running gag in a friendship that lasted nine years.

The last time anyone remembers seeing The Soul of Spain was when we took the pool cover off for the summer and found it laying at the bottom of the pool.

I don’t know why this memory sticks with me.  Probably because my parents and the Ruckers seemed to get so much pleasure out of playing this little game.

But, frankly, I’d forgotten all about it until about five years ago, when I found myself caught up in my own little running gag.

I was standing outside a room as a bottleneck had formed at the doorway, people heading in for the next panel discussion.  There was a tall, attractive blonde trapped just inside the door, unable to get past the throng.  She looked pleadingly at me and said, “I’ll pay you a quarter if you’ll get these people to stop.”

So I threw my hands up and shouted “stop” at the wave of people approaching, allowing the blonde to slip through the doorway to freedom.

A couple hours later, I ran into her in another hallway.

“Where’s my quarter?” I asked.

She looked at me.  “Seriously?”

“Hey, you promised payment,” I said.  So she gave me a frown, dug through her purse and handed me a quarter.

The next day I found her again—found out her name was Twist Phelan—and gave her her quarter back.  “I was just kidding,” I told her.

Twist insisted I keep it, but I wouldn’t hear of it.  And I’ll be damned if I remember much of what happened with that quarter after that until we fast forward a bit, to either Bouchercon or LCC (I can’t remember which), when Twist not only gave me the quarter again, but this time she had painted it with acrylic paint.

The next conference (or two or three) I returned the quarter, but I added a small car, gluing the quarter into the driver’s seat.

When I got it back from her (at the next conference), there were now two quarters, plus a few plastic cows riding in the back seat.

Obviously, things had escalated, Twist and I trying to top each other.  But when she handed me the car with the cows, I was stumped.  How am I going to top this? I wondered.

Fortunately, my wife came up with a solution.  And because I was so busy writing, she was good enough to put the thing together for me as LCC 2010 approached.

When I went down to L.A. for the conference, however, I realized that I had forgotten the “thing” (what do we call it at this point?) and had to drive all the way back home to get it.  (click on photo to enlarge)

Needless to say, Twist was a bit blown away by my wife’s efforts.  But not one to shrink from a challenge, she flagged me down at Bouchercon a couple weeks ago and presented me with her addition to the “thing” and, of course, she once again managed to take things a step farther.

Now we had two quarters, two cars, three cows, one of them dead and covered in blood, a crime scene, plus a tsunami full of sea creatures.

I can only imagine what it’ll look like in another five years.  But, trust me, I already have a new addition in mind—one aided and abetted by Mr. Brett Battles—and I think Twist is in for a nice surprise.

All of this, of course, brings back those memories from my childhood and that damn Soul of Spain album.

So the question of the day, I guess, is—have you ever or are you currently involved in a similar type of gag?  If so, tell us about it.  And, if not, how about sharing a memory of fun times from your childhood?

29 thoughts on “The Games We Play”

The man won't protect American troops, but he can protect a damn statue in Brazil.

@KeishaBottoms Take care of yourself. ❤️❤️

The sky goes black, a bolt of lightning, a crash of thunder and then sheeting rain. In short, the perfect time to turn out all the lights and listen to Michael Nyman’s DECAY MUSIC. “1-100” is a piece for solo piano… 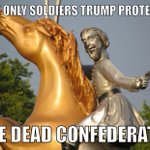