I’m out and about today, so I hope you don’t mind if I play a substitute?

Here for your entertainment (and possibly your enlightenment) is the second in an occasional series of guest blogs from my close-protection expert and main protagonist, Charlie Fox, touching on the subject of personal security. For those of you who didn’t see her opening instalment back in June – which went into how to spot and avoid trouble in the first place – you can catch up on the subject here. For those of you who enjoyed the words of wisdom last time out, read on at your own risk . . .

Charlie Fox: People assume that if you want to stand any chance of defending yourself from serious attack you need either to be built like an outside lavatory or be some kind of martial arts guru. Well, yeah, it all helps.

But deterrent or brute force are not the only alternatives.

If you’re reading this in one of the countries around the world that encourages its citizens to bear arms, you might decide to take that route. But I’m a Brit and back home we’re liable to arrest if we’re caught in a built-up area during the hours of darkness in possession of a loud shirt, never mind anything that qualifies as an offensive weapon.

That means not only are firearms of any description out of the equation, but also pepper spray, TASERs, and anything more than a butter knife. Good job all the thieving toe-rags out there also play by these rules, isn’t it?

So, if you’re a civilian and the only black belt you own is the one holding up your black trousers, you need a fallback plan.

And that, I guess, is where I come in.

I’ve always been a big fan of the sneaky ‘speak softly, but’ approach. Trouble is, if you do carry a big stick and end up actually hitting someone with it, you’re likely to find yourself in the back of a squad car with your wrists braceleted together behind your back faster than you can say, “Hey officer, he started it!”

So when is a weapon not a weapon?

As I mentioned last time, having a dog is a good deterrent. But if you don’t happen to own a ferocious pet of some description? 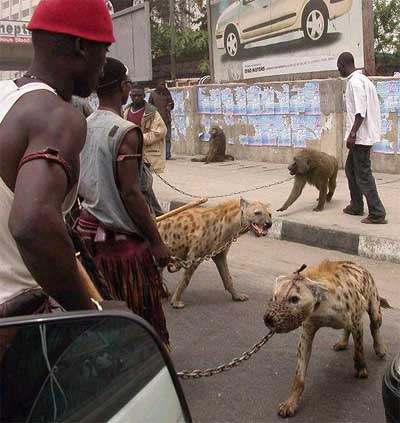 Well, then you have to use whatever item comes to hand.

Speaking of which, here are a few fairly innocuous everyday items you might like to consider for personal defence: 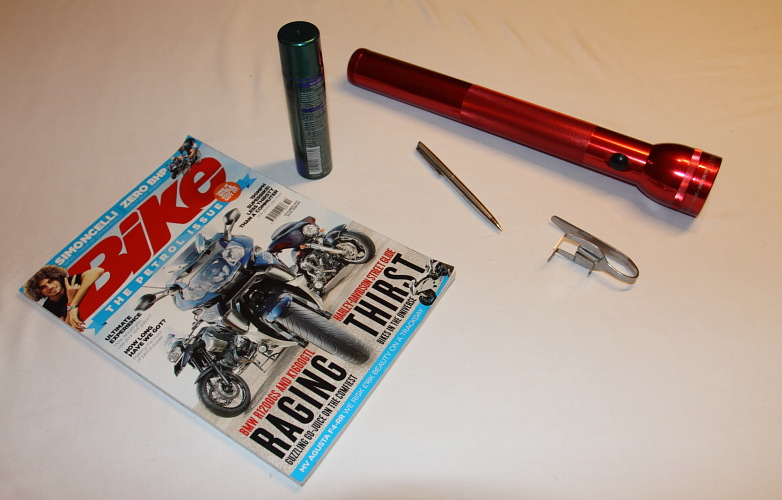 I admit the bent fork doesn’t look so innocent now, but it started out as a cheap table fork, same as can be found in cutlery drawers across the country. (OK, my mother would probably die before letting such inferior stuff lurk among her hallmarked silverware, but that’s another story.) I found this one in the kitchen of an organisation called Fourth Day, out in California. I was unarmed and in need of something I could use for my own protection – something that wouldn’t be missed like a chef’s knife. I bent it into this handled claw shape using the steel legs of a bed frame, and kept it under my pillow. 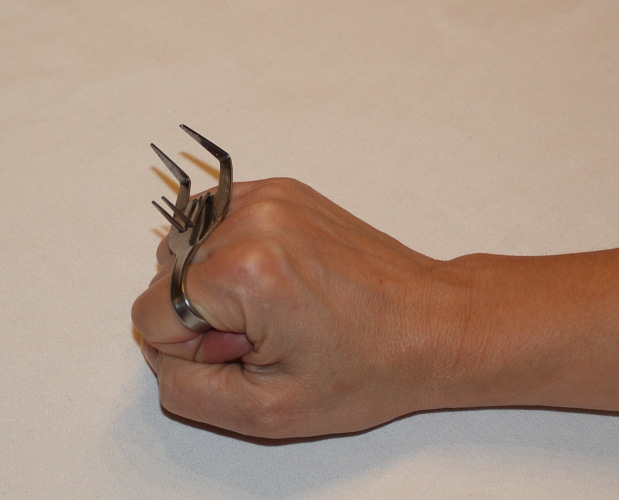 And yes, when I needed it, my improvised knuckleduster proved pretty effective.*

Not only is it a nasty thing to hit someone with, almost guaranteed to do some damage and mark them for later identification, but the way the handle bends around your fingers makes it hard to take away from you, and it also protects your hands.

Protecting your hands is vital. If you’re not a bare-knuckle fighter by training or disposition, the chances are that the first time you hit someone in anger, for real, you’ll break something.

And as soon as you injure your hands, you’re halfway stuffed.

You should avoid it if you can.

Same reason why I’d be wary about using a bunch of keys clenched inside a fist for self-defence – there’s as much chance of breaking your own fingers as your assailant’s face.

Instead, as you’re walking along a deserted street or back to your car in a darkened parking garage, why not just carry a rolled-up magazine? In the past, I took on a burglar with a copy of Bike, which is a nice weighty mag and perfect-bound – it has a thick spine instead of just a row of staples. Tough enough to be effective, flimsy enough to be laughed out of court. And while he was down on the floor still gasping, at least I had something to read.** 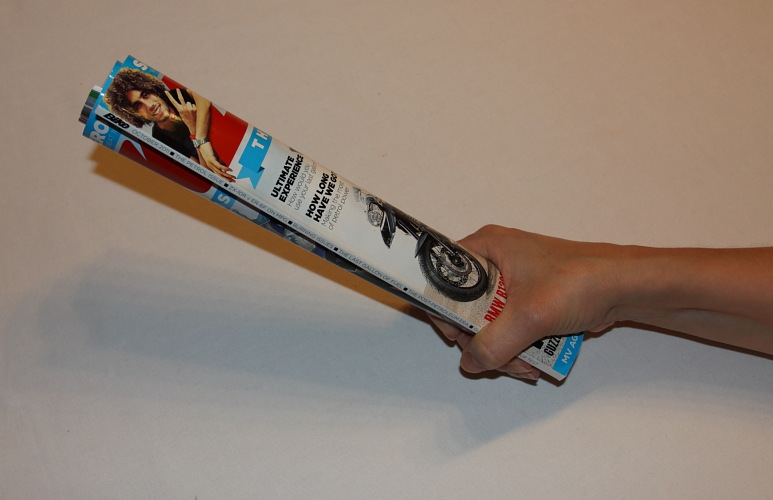 Roll the mag up reasonably tight and keep the hard ridge of the spine to the outside. Then strike with it as you would a baton. Practice. I’ve seen the end of one of these punched through an internal door. (OK, practice on an old cardboard box – you’ll be amazed at the damage you can do.)

I keep a four-cell Mag-Lite by the bed … purely in case of a power-cut – why else? Hold it like the cops do, just behind the head. That way you can use the tail-end to strike out at an intruder without breaking the bulb. And once they’re down you still have the light to see who it is you’ve clobbered. 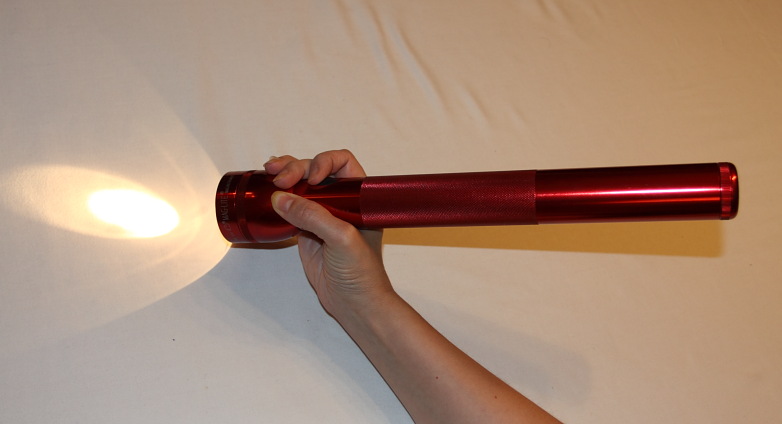 A steel-case pen is another terrific improvised weapon and one that most people have about them at any time. It can be used clenched in the hand in a hammer grip to strike at the eyes, face, temple, side of the neck, ear, shoulder muscles or chest. 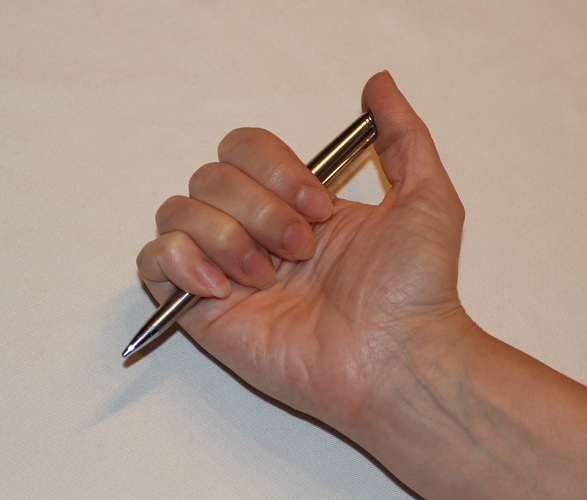 And if you don’t have a pen? The handle of a toothbrush will do the job, a small pocket flashlight or even a roll of sweets. Basically, anything that’s small and cylindrical and easy to hold, but will not cause damage to your own hand when you use it.

There are numerous grips you can use with this kind of object, like palm-push and pointing finger. All will be just as effective if delivered with determination to a vulnerable area.

The last item in the group shot above is a small canister of hairspray. If you’re being attacked, threaten someone’s eyes with it – hell, if they’re attacking you, don’t threaten, just point and squirt. I happen to know that a liberal dose of lacquer in the eyes will take the fight out of just about anybody.*

Not to mention what you can do with a canister of spray and a cigarette lighter . . . 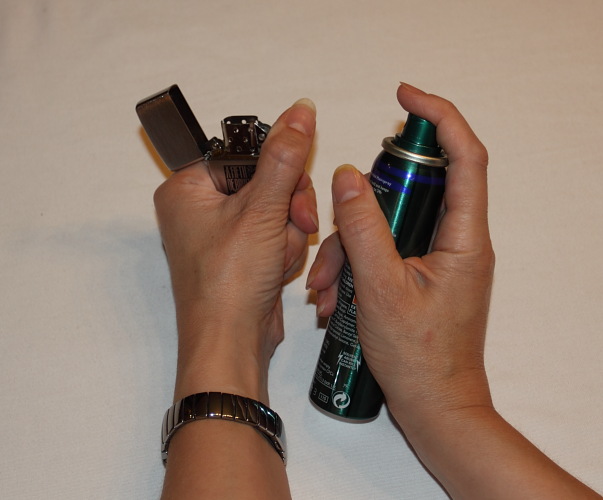 So now you’ve chosen your improvised weapon for self-defence, what do you aim for?

Given a choice in a close-up scuffle, I’d usually go for the throat. Might sound like a cliché, but think about it. In a fully dressed assailant, the body is likely to be covered up. The face too, if they’re wearing a ski mask to avoid you picking them out of a line-up afterwards. I’ve been there, and let me tell you that not being able to see your attacker’s face all adds to the scariness of the situation.***

The eyes are a good choice, but harder to hit if they’re wearing glasses. But the throat is usually exposed and is a small, easily identifiable and relatively soft target. That is one area you could hit with your fist and be reasonably assured of it hurting them more than it hurts you. (I’d try to use a forearm or elbow-strike, though.)

Anywhere on the face is good, too. Eyes, temples, ears, neck, or the soft area under the jaw. There’s a sweet-spot about halfway along the jawline itself (just about where the tails of a droopy moustache would end) that will put them down every time if you place it right.

I’d bypass the body for an initial strike. Unless they’re wearing fairly light clothing, in which case the fleshy vee under the rib cage – the solar plexus – is a good aiming point. A solid blow there with leave your attacker doing landed fish impersonations on the ground while you leg it. 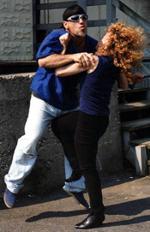 Most guys, I’ve found, have pretty fast reactions when it comes to protecting the family jewels from sudden attack. Mind you, if you are forced into close contact then there’s always the opportunity for a fast-raised knee.****

Instead, knees, ankles, shins and feet – probably in that order. The knee is a straightforward lateral hinge joint and very vulnerable to impact. Ask any sportsman.

(And if you’re squeamish, you might want to scroll past this next pic a bit sharpish.) 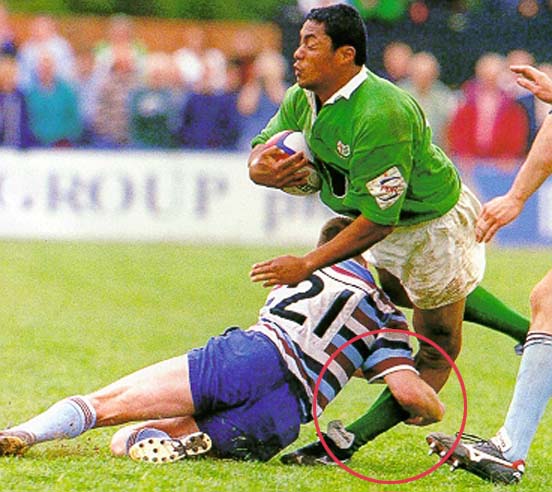 Back with me? OK. Deep breaths – you’ll be fine.

Unless you’re Jean-Claude van Damme, don’t go for high kicks to the head. It’s opening yourself up – if you’ll pardon the pun – for a hefty punch in the knackers. 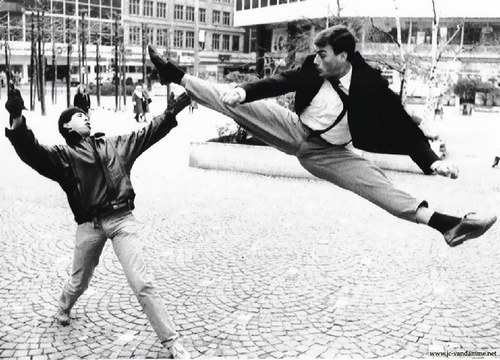 Instead, a low level stamp-down kick to the side of the knee always proves effective.*****  The shins contain a huge cluster of nerve-endings that will put most assailants down if gouge or clout them with enough gusto. And when it comes to the final target – the feet – the instep is probably a better target than the better-protected toes.

Unless, of course, you’re being mugged by a guy in flip-flops.

In which case you should be ashamed of yourself – grow a pair.

So, questions for you – what do you carry that you could use to defend yourself in an emergency? And have you ever had to use it?

As mentioned, I’m out and about today, but I’ll get to comments when I can. Tomorrow I’m guest-blogging over at Jungle Red Writers. I hope you’ll stop by and say “hi”. I’ll bring virtual cookies!

This week’s Word of the Week is cognition, meaning the act or process of knowing, in the widest sense, including sensation, perception, etc, distinguished from emotion and conation; the knowledge resulting or acquired. And as an aside to that, also cognosce, which in Scots law means to examine; to give judgement upon; to declare to be an idiot.

All techniques mentioned are described in the following books in the Charlie Fox series: