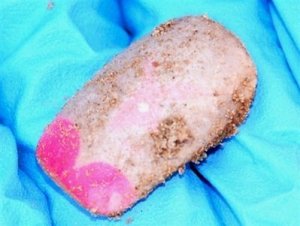 The fingernail got me. That scrap of keratin, the bright pink acrylic polish in two half moons that — to my eyes — formed the top of a heart. The nail, magnified several times, flecked with specs of dirt from a young identified woman’s last resting place.

The Albuquerque Police Department (APD) released the picture last Friday with the hope that someone, somewhere, will recognize the artwork and help them put a name to the victim. Last Friday was also the day that APD announced it’d no longer be digging at what is now known as the country’s largest crime scene area. Close to one hundred acres, eleven bodies and a fetus, dirt and dust and rocks all on the west side of our city — a burial ground of horrific magnitude — a barren monument to the kind of sorrow parents should never, ever have to know.

The “West Mesa Mystery,” as it has now been packaged by the media, began to unfold in mid Feburary this year when a jogger found human bones in the middle of a large tract of land surrounded by newer subdivisions. There’s a lot of this kind of unused space in Albuquerque, a fast-growing city with a marvelous climate and an amazingly steady/low unemployment rate (compared with the rest of the country).

Soon the bones of one person became two, three, four . . .

Of the seven young women identified so far, all had had difficult lives, had taken bad turns into drug use and prostitution. In the early days of the investigation, debates raged. People were angry that the victims’ lives had been negatively characterized and profiled. The police countered with the fact that they needed to find common links between the dead, a way to understand why all of them had been dumped in those crude graves around 2004-2005.

And the police needed to identify the remaining four victims.

Hundreds of parents from around the country had contacted APD, desperate to know if those bones could be one of their missing children — gone around the same time period, maybe sending a postcard from Albuquerque . . .

Though I’m a writer and a mother, I cannot and don’t want to imagine their pain, the emptiness of not knowing.

I don’t want to and cannot imagine the utter life-shattering moment when someone calls to say that it’s your daughter’s bones crime scene workers have uncovered under the hot New Mexico sun.

So I did what most people do. I let myself watch the news about the women — there’s been something almost every night since the discovery — without permitting myself to think too much of the suffering and misery that went along with the stories.

It was easy to do in a way. Though the interviews with parents were sad, they were other people’s pain. All the pictures of the identified victims showed the women when they’d been happy and alive. It was easy . . . convenient  . . . to be detached.

It was the same thing that happens with other mindboggling tragedies: Darfur, the Holocaust . . .

Then came the fingernail.
That small piece of decorated protein.

And all my rationalizations and comfortable distancing crashed down.

I look at my children differently now, at the promise of their youth and want to scream, “None of those West Mesa victims deserved their heartbreaking brevity! None!”

To think that an entire life, a young woman’s whole identity, comes down to one fingernail.

It saddens me to my very core.

If you want to know more about the West Mesa Mystery, America’s Most Wanted did a good job last Saturday night (April 25).

16 thoughts on “The fingernail”