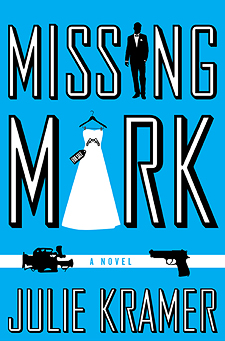 Let’s give a big Murderati welcome to guest blogger Julie Kramer. Her debut thriller, STALKING SUSAN, won the RT Reviewers’ Choice Award for Best First Mystery, the Minnesota Book Award for genre fiction, was a finalist for the Mary Higgins Clark Award and is also an Anthony nominee for Best First Novel.

Lucky for us, her sequel MISSING MARK will be released tomorrow, July 14, from Doubleday.

A wedding dress is the most sentimental garment a woman will ever own. What would it take to part her from it? Economics? Anger? Grief? Space?

I’ve always been curious about the wedding dresses advertised for sale in the newspaper want ads and now on the internet.. Each dress held a potentially riveting backstory…perhaps of pain, perhaps of relief.

Writing my second book, MISSING MARK, I asked myself the question that sets many authors on the path to plot: what if?

In MISSING MARK, my TV reporter/heroine answers an ad reading “Wedding Dress For Sale: Never Worn” and is drawn into a dangerous missing person case. She meets a bride not only left at the altar, but left with many unanswered questions about her errant groom.

In real life, I’m a journalist. And we’re very nosy. So recently I’ve been calling the wedding dress ads and asking the brides or almost brides ‘what happened?’ The answers ranged from ordinary to fascinating. Although none was as wild as what happens to my fictional bride.

Some women simply need the money. Times are hard. Sacrifices need to be made.

One woman was almost killed by her ex-fiancee (now in prison) and doesn’t want any reminders of the relationship.

One became pregnant and the dress won’t fit on her wedding day.

Another simply wasn’t sentimental. The dress was just old fabric that took up a lot of closet space.

One bride found a dress she liked better than her first pick.

A couple women preferred not to answer. I suspected their stories might be the most interesting of all. But then I do have a vivid imagination.

No wonder, tales of weddings gone wrong have long been a stable in literature. Whether you’re looking at Shakespeare, Jane Eyre, or Nancy Drew…a wedding dress is certainly worth a thousand words. Often even 80,000.

My book also deals with issues of the media and missing people, along with a rare medical condition, but I imagine when book clubs sit down to discuss MISSING MARK, the big question will deal with whether they still own their wedding dresses. If not, why not? If so, what would it take to make them part with the gowns? And is a used dress from a bad breakup tainted?

Twenty years later, I still own my wedding dress. It’s boxed in the basement. I’d never sell it. But I’d give it away. Nothing would please me more if a young friend or relative wanted to take it down the aisle again. I think wearing a wedding dress from a happy marriage might spell good karma, but most brides these days seem to want to start fresh. And the brides I phoned about their want ad gowns hadn’t had many callers eager to write checks.

How about the rest of you? Wives, would you ever sell your wedding gown? Husbands, would you care if your wife did?

Hey, all, Pari again. If you want a real kick go to Julie’s book trailer for MISSING MARK.
And join us next week for Rhys Bowen.

20 thoughts on “The drama of a dress”

@SuzMcBrideBooks @Lorenzo23462 Last I heard, Michelle is very happy to be rid of all the bullshit of living in the WH. IMHO, there would have to be something seriously wrong with anyone who would want more than two terms as President these days.

@KamVTV Which is a shame, considering the idiot alternatives.