As Stephen mentioned yesterday, those of us lucky enough to attend had a great time at the Los Angeles Times Festival of Books this past weekend.  A two-day (or three-day, counting the Times’ Book Awards dinner Friday night) celebration of books and the people who write them — what’s not to love about that?

But this year, my appreciation of the Festival was even greater than it has been of late for one simple reason: I got a new coffee cup out of the deal.  Here it is: 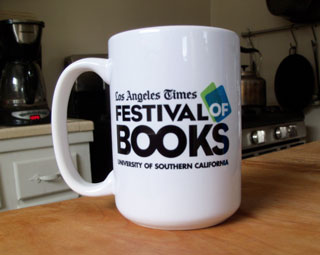 See, unlike my experiences over the last several years, I attended LATFOB this year as an invited guest, and the cup was included in my swag bag.

Not only did I have a seat on the “California Noir” panel Sunday afternoon along with a great group of authors, Kelli Stanley among them, I also served as a presenter at the aforementioned Los Angeles Times Book Awards dinner two nights before.

(Stephen King won the award in my category of Mystery/Thriller for his epic novel 11/22/63, but alas, he wasn’t there to accept it from me in person.)

This last was a great thrill, and quite an honor, and it afforded me the opportunity to meet some people — authors, editors, journalists — I might never have met otherwise.  But just being asked to sit on a panel during the Festival itself is a gift from the gods, and I got quite a kick out of it.

Because I know I might be right back on the outside looking in next year, and the view from those seats suck.

Groucho Marx once said, in so many words, “I wouldn’t want to belong to any club that would have me as a member,” but I couldn’t disagree more with such a cynical statement.  When The Los Angeles Times chooses to ask you, Joe Author, to its party, that may not be a sign you’ve arrived, but it’s a sure-fire indication that you haven’t completely disappeared.  And disappearing — vanishing from the collective consciousness of readers and editors, agents and bloggers — is every writer’s greatest fear.

Long before you become rich and famous, before you can pay your damn rent as an author, you have to be a known quantity to potential readers, and that can only happen if you’re part of what I call “the Conversation.”

You don’t think my stuff is the product of genius?  No problem, as long as you know my name and my work, and find me deserving of a line or two in any discussion you have on the subject of crime fiction.  The Conversation is where the magic of word-of-mouth begins.  You have to be in the game to win it, and you can’t get in the game if nobody knows who the hell you are.

So visibility is an author’s best friend, and the higher your visibility, the better.

Being visible to those who attend the Festival isn’t the only benefit of being part of the LATFOB program, however.  There’s also the boost it gives to the ever fragile author’s ego.  Validation comes in many forms — I’ll blog on that subject at length at some future date — and having the Times acknowledge your significance on the literary scene by offering you a role to play at its book festival is one of the more gratifying ones.  It’s proof you haven’t been writing in a vacuum.  People really have been reading you and finding your work worthy of mention.  You may not be able to buy a cup of coffee with such validation, but it feels damn good, all the same.

And when the invite from the Times doesn’t come?  You feel like a loser.  Like that chubby kid who failed to get picked on a team down at the corner playground, even though he could knock the cover off the ball if given a chance.  Intellectually, you understand that no author can be asked to participate every year; there are just too few slots for too many worthy writers for someone to get one in perpetuity.  And yet you take the snub personally, as a sad commentary on how far you’ve come in your career and how far you have yet to go.

Anyway, back to that new LATFOB coffee cup of mine.  It sure beats the hell out of my old one, which I received the last time I made the festival cut back in 2006: 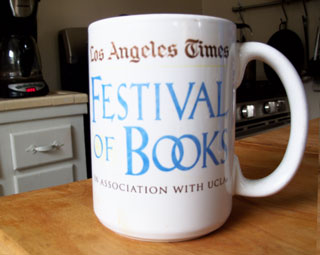 And if you think that one looks bad, take a look at the one I got three years before that, when I was first invited to participate in all the LATFOB fun: 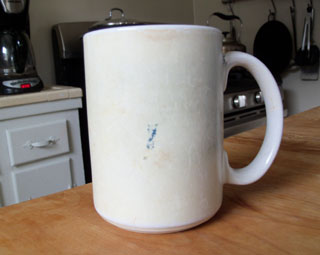 I know — the design’s hard to see.  These things fade over time.

Visibility’s a bitch to maintain, ain’t it?

9 thoughts on “THE CONVERSATION”