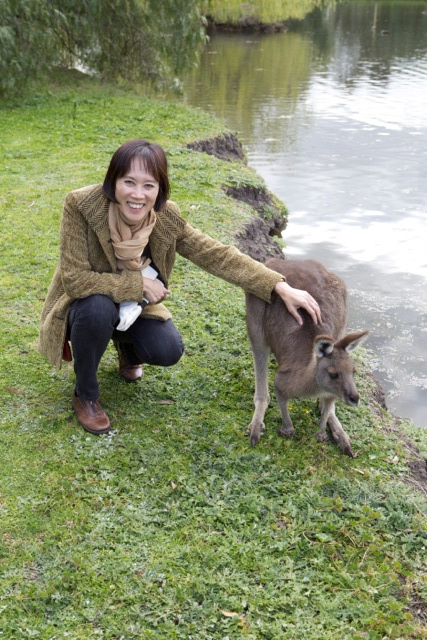 I just got home from a head-spinning book tour to Australia and New Zealand, and although I’d love to overwhelm you with my hundreds of cool travel photos, I’ll try to focus here on books and publishing. I’m always curious about what’s going on in the books business around the world, and this trip allowed me to chat with booksellers, publishers and local writers to get an idea of the specific challenges facing our friends Down Under.

My first stop was Auckland, where I was a guest speaker at the Romance Writers of New Zealand conference. Since the romance genre is where I started my career, it felt like a homecoming, and what fun it was to dress up for the opening night party where I wore — what else?  A tiara!  Here I am, snuggling up to Nalini Singh and the wonderful Tessa Radley, who first invited me to attend.

One sad note put a damper on everyone’s spirits, though: the sudden death of Desire author Sandra Hyatt, who fell critically ill over that weekend.  Because RWNZ is such a small and close-knit group, the loss shook everyone.

Also in Auckland, I did an evening event at the Women’s Bookshop, where I sipped wine with my NZ publicist Yvonne Thynne and one of the most enthusiastic promoters of the mystery genre in New Zealand, Craig Sisterson.

From there it was on to Christchurch where, despite the recent earthquakes, the Christchurch Arts Festival has been reborn.

(with Ruth Todd and Yvonne Thynne)

Although I wasn’t able to visit the central business district to see the worst of the damage, it’s obvious that the city is still rebuilding.  It’s still experiencing frequent quakes, and residents have become so accustomed to them that they’ll debate with great authority whether that last tremor felt like a 4.2 or a 3.8.  All over town, you can spot signs of quake damage, including at my hotel:

During my 2003 visit to NZ, my book event was held in Christchurch Cathedral, and it’s sad to think how many of those lovely buildings I saw then are no more.  But the city seems determined to move forward, and the Arts Festival was a hit, with a nice turnout to see author John Hart and me being interviewed by Graham Beattie, as well as the presentation of the Ngaio Marsh Award (to Paul Cleave).

Most New Zealand writers must sell to foreign markets if they want to earn a living.  With a small population (just over four million), it would be difficult indeed to support yourself with just the local market.  If you sell as few as 300 copies in a week, you can land on the top-5 NZ (international) bestseller list.  A big concern is the astronomical price of books.  Because of their small economy of scale, books aren’t printed locally but are shipped in from Australia, adding to the cost.  A hardback costs $60! (NZ/US rate 1.00/ 0.85).  The e-book revolution has yet to fully arrive on its shores, but with the high price of print books, it’s not hard to see that e-books could threaten print sales. And when those e-sales happen, where will the money go?  Will it be sent overseas to Amazon.co.uk?  How will New Zealand publishers survive if e-sales profits go out of the country, instead of being kept within its borders? Obviously they’ll need to establish their own e-sales territory to keep consumer spending local.

In Australia, many of the same issues are brewing.  E-sales are still a small part of their market, but they can see the revolution on the horizon. While print books are cheaper than in New Zealand, they’re still expensive compared to the U.S.  Australia’s population is 22 million, and it takes about 1,000 weekly sales to hit the top-10 bestselling list, but it’s still not a big enough market to support most local writers. Foreign sales, once again, are key to survival.

My travels in Australia took me to Adelaide…

… Sydney, and finally Melbourne, site of the Melbourne Writers Festival, where every event seemed to be sold out.  I gained street cred with my kids when I shared the stage with Steve Hely, producer and writer for “The Office” (U.S. version), revealed crime writing tips along with one of my favorite writers, Michael Robotham, and went on to a cozy evening with the local Sisters in Crime chapter where I was interviewed by Rose Mercer and had dinner with our own P.D. Martin (waving to P.D.!).

What I learned is that writers everywhere are facing the same challenges.  Finding readers. Trying to figure out where we’ll fit in as e-books take over the market. No matter where you go, the writing business is a challenge.

14 thoughts on “The Books Biz Down Under”