Or in the timeless words of John Cleese in Monty Python’s skit:

He’s not pining! He’s passed on! This parrot is no more! He has ceased to be! He’s expired and gone to meet his maker! He’s a stiff! Bereft of life, he  rests in peace! If you hadn’t nailed him to the perch he’d be pushing up the daisies! His metabolic processes are now history! He’s off the twig! He’s kicked the  bucket, he’s shuffled off his mortal coil, run down the curtain and joined the bleedin’ choir invisible!! THIS IS AN EX-PARROT!!

Apparently, Alex and I are on the same psychic wavelength once again because while I planned on writing about death, she was planning on making me an ex-writer. All I ask is that she waits until I’m done with my current book!

My mom has been organizing my office for me and last week she found hidden in my bookshelves a morbid little book called THE WHOLE DEATH CATALOG. My editor sent it to me because I’m a fan of Harold Schechter, who wrote one of my favorite research books, THE SERIAL KILLER FILES. 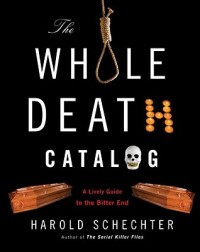 In college, I took a Philosophy class to fulfill a requirement, and I absolutely hated the segment on Death and Dying. Odd, perhaps, because I write about murder and criminal psychology and a lot of people die in my books. I’m more interested in the whys of death—homicide or natural—than in the process of dying. This probably explains my fears as well—death (as in the final outcome) doesn’t bother me. It’s the path to being dead that I don’t like to think about.

So I’d forgotten about THE WHOLE DEATH CATALOG until my mom found it. I picked it up and flipped through it. There’s a lot of interesting, albeit morbid, trivia and a lot of research about how people viewed dying across time. What makes it almost fun is the author’s voice, illustrated well in this paragraph from the introduction:

“Concerned that you lack the necessary skills to throw a truly memorable funeral, one that expresses the unique, inimitable (albeit now defunct) you? Not to worry. A new branch of the mortuary business has lately sprung up, composed of experts who, taking their cue from professional party planners, will help you arrange the perfect going-away-forever affair, complete with specialty catering, appropriate music, and even giveaway “funeral favors.” Sort of like a really top-flight wedding or bar mitzvah, only with a cadaver as the guest of honor.”

Some of the fun tidbits from the book:

The motorcycle hearse. Schechter’s research uncovered that the first known biker burial was in the UK immediately after WWII. Now, the practice has spread to the US and if this is the way you want to go to your grave, check out Biker Burials. 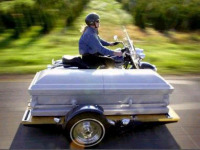 Then the question: To Burn or Not to Burn? The history of cremation. The different types of caskets explained, including some of the not-so-successful ideas in coffin-making: the glass coffin, the cement coffin, and the rubber coffin. I really didn’t need to read the history of embalming; however, I did have a spark of an idea for a future book.

One of my favorite stories was about (surprise) serial killers William Burke and William Hare. Prior to 1830, it was extremely difficult for medical schools to obtain cadavers for anatomical study, according to Schechter. Some people became grave robbers, digging up freshly buried corpses and selling them to “anatomy schools.”

Not so for Burke and Hare. When an elderly lodger of Hare’s died owing money, Hare sold the corpse to an anatomist. When he saw how much money he could make, and disliking the “difficult, dirty, and dangerous business of grave robbing,” Hare and Burke opted to create their own cadavers. First hastening the deaths of the elderly in Hare’s boarding house, until they were all dead, they next preyed on prostitutes and the homeless. Fifteen people died this way before they were caught.

There is even a chapter on Death in the Movies and another on Death Lit 101, perhaps of more interest to Murderati readers.

For example, the “Most Emotionally Satisfying Death” according to Schechter?

Dirty Harry (1971). Few, if any, other moments in cinematic history are as profoundly gratifying as the climax of this two-fisted classic, when Clint Eastwood’s heroic police officer puts a well-deserved .44 Magnum slug into the worthless carcass of the sniveling long-haired psycho killer after asking, “Are you feeling lucky, punk?”

“Most Shocking Death in a Classic Film Noir”

And in “Death Lit?” Most of us have probably read many of the entries: Edgar Allan Poe’s “The Masque of the Red Death,” William Faulkner’s “A Rose for Emily,” Evelyn Waugh’s “The Loved Ones”, and Katherine Anne Porter’s “The Jilting of Granny Weatherall.” Schechter also writes about W.W. Jacobs’s “The Monkey’s Paw” (one of the scariest stories I have ever read!):

“Playing on a proverbial theme—be careful what you wish for—this classic tale of terror (arguably the scariest ever written) serves as an effective reminder that the very human impulse to pray for the return of a deceased loved one might not be such a hot idea.” 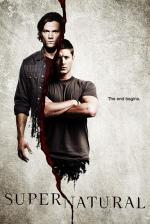 Season 6 ArtIn SUPERNATURAL, one of my favorite television shows, it would have done the Winchester Brothers (and their dad) some good to read “The Monkey’s Paw.” In the season two opener, the dad John agrees to exchange his life to save his son Dean. At the end of Season Two, Dean makes a deal with the crossroads demon and gets Sam’s life back (he’d been dead a couple days, but didn’t seem to suffer the decomposition process—I had to put aside the disbelief on that one) in exchange for his own. Dean has one year, then he’s going to Hell. Season Three is spent trying to get Dean out of his deal, but to no avail. He goes to Hell. (He comes back in Season Four.) And one of my favorite characters, who’s only been in two or three episodes, is Death (played by Julian Richings.) Creepy and perfect for the role. A lot of death and afterlife (afterdeath?) in this television show!

Julian Richings as “Death” one of the Four HorsemanWhat is one of your favorite movies or books with death as a central theme? Something that made you laugh or reflect—or both. And if you can’t think of one, what kind of funeral celebration do you want? Somber and traditional, a lively wake, or maybe hire a party planner so your friends and relatives will talk about your funeral for years?

19 thoughts on “The Bitter End”