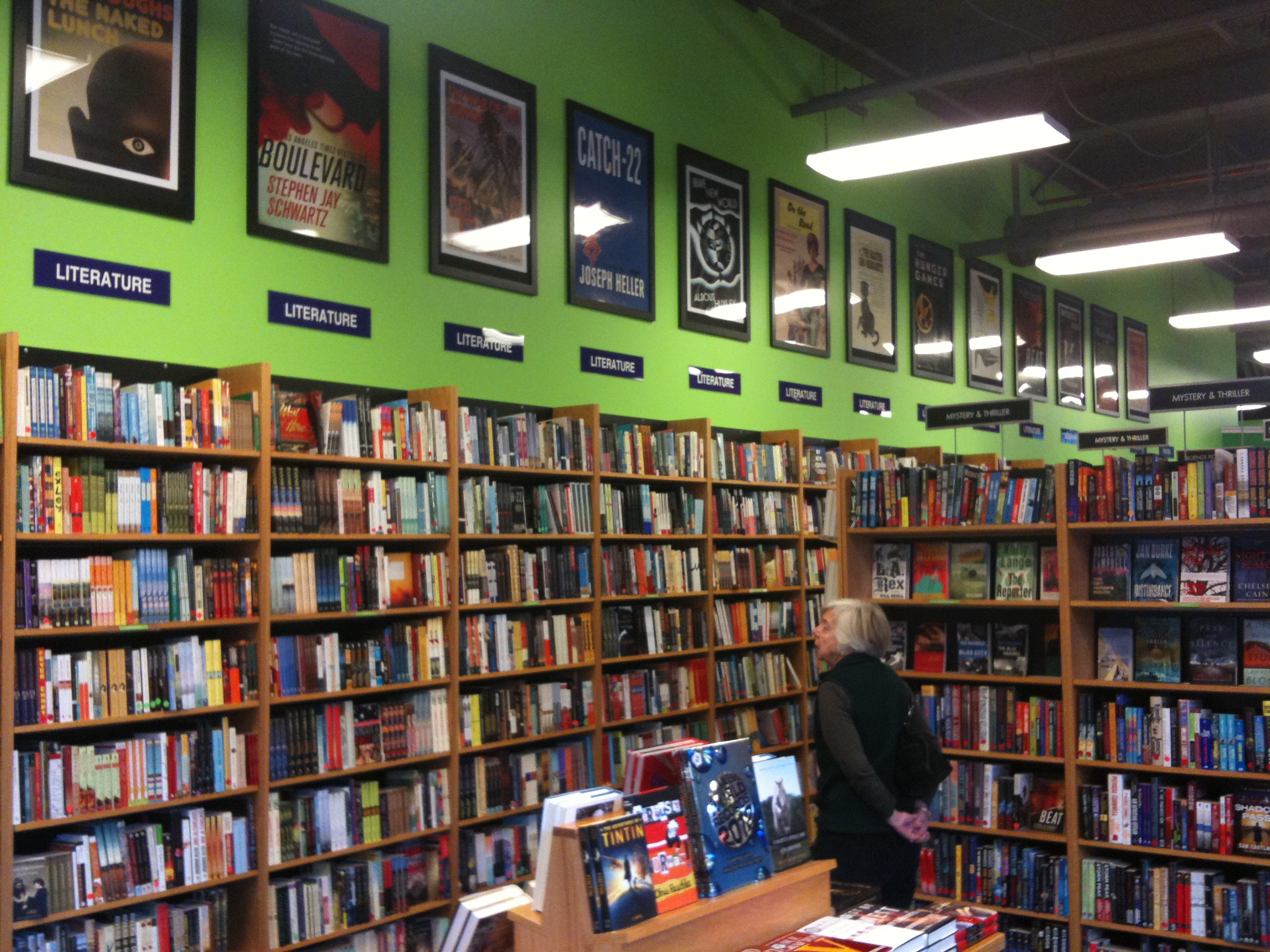 This is a success story. It’s the story of two individuals who rolled the dice. 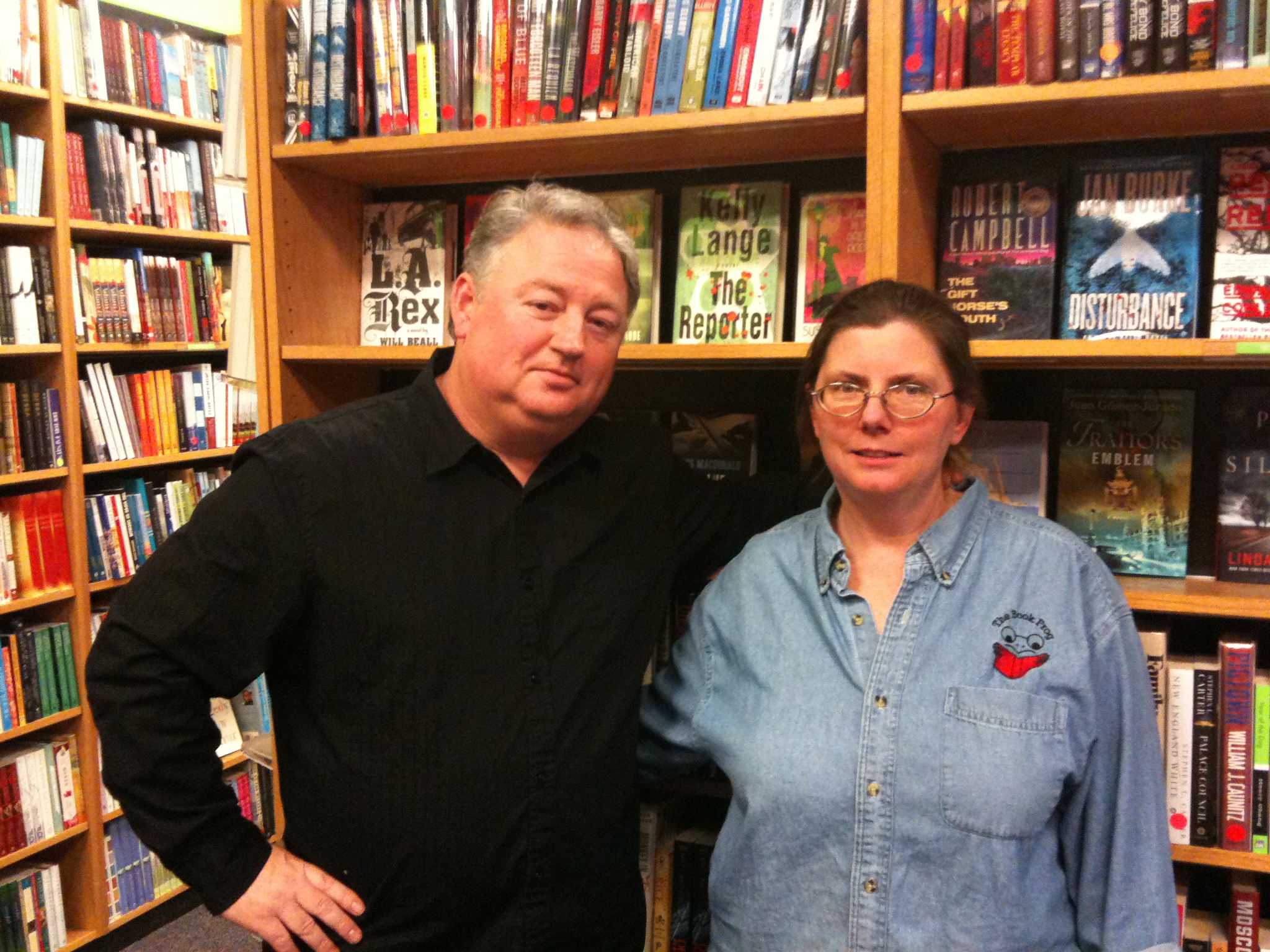 (Owners Pete Ledesma and Rebecca Glenn at The Book Frog)

They opened an independent bookstore. Three weeks ago.

I encountered Becky and Pete at roughly the same time. Becky’s name popped up on a Google Alert when she reviewed my first novel, Boulevard. I read the review and then I read many others she had written on this brilliant little website called The Book Frog. The site links to Murderati and to Tim Hallinan’s Blog Cabin and numerous other sites. Becky’s reviews are full of insight and wisdom and her library on LibraryThing.com speaks volumes about her commitment to the written word.

Becky was the manager of the Borders Books in El Segundo, California.

Pete was the manager of Borders Books in Rolling Hills Estates, California. Pete was the one who passed my book to Becky, his girlfriend, after one of his booksellers told him it was written by a local author. In fact, the very first place I saw Boulevard on the shelves was Pete’s Borders. Pete became incredibly supportive of both Boulevard and Beat, instructing his employees to hand-sell my books to every customer who said they liked reading The Girl with the Dragon Tattoo. Gotta love Pete.

I soon discovered that Pete had also written an unpublished novel and I asked to take a look at it. I read the book, Norman’s Conquest, and was frankly blown away. It’s a charming mystery romp with such rich character description that I came away envious of his talent. He took a stab at getting it published a few years back, but met with some resistance, as most of us do. I told him to get it out there again, or to self-publish it, because the work is good and it needs to be seen. 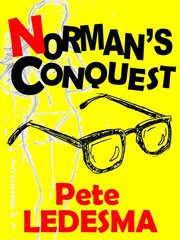 Becky and Pete, long-time soul-mates, were also long-time Borders cheerleaders. They lived and breathed the business. And then the ax came.

Their jobs were gone. It was liquidation time. Pete had built a loyal community of customers at his branch and no one wanted to see him go. People started asking him if he would open a bookstore of his own.

A bookstore of his own. Right. In this economic climate?

But the chorus grew loud and he and Becky started asking themselves crazy questions, like, “Should we open an independent bookstore of our own?”

They had a tiny bit of savings. They had a little bit of credit. They did not have jobs. They went to the banks and discovered that the banks were capable of great fits of laughter.

They’ve come a long way, Pete and Becky, and still they’ve just begun. They’ve got one of the largest fiction sections in the South Bay, and, in addition to their growing mystery section, they have a special spot for California Crime Fiction and a section for out-of-print, used books by the likes of Ross MacDonald, John D. Macdonald, and many others. They hope to make The Book Frog a place for book signings, book launches and author panels.

I wanted to ask them a bit about their journey into the great unknown. I wanted to celebrate their entrepreneurial spirit, their sense of adventure, their commitment to making their dreams a reality…

Stephen: Tell me a bit about your experiences as booksellers. What are your backgrounds?

B & P: Becky became a bookseller way back in the Clinton era. She started at Borders in Mesa, AZ in March of ’94. Back then Borders was awesomely cool, staffed from the top down by people who loved and lived books. It was like coming home. In the years to follow that home would become more and more dysfunctional, but hey–at least she got to work around books all the time. Pete started at the Brea Borders in 1996. After 11 years in Aerospace, he loved being surrounded by books instead of rum-soaked engineers.

Stephen:  What was it like when you heard that Borders would be going out of business?

B & P:  It was like receiving the diagnostic confirmation that someone you once loved and still care about is dying.

Stephen:  How did The Book Frog evolve from there?

B & P: When Pete’s store went into liquidation early this year his customers and the other merchants in the mall immediately began asking whether he would be opening a new bookstore. At first it seemed like a crazy idea, but it soon came to be the only idea. Since booksellers don’t make very much money at the best of times, and since Borders hadn’t been in a position to give any kind of raise for half a decade, and since we had made the probably ill-advised decision to purchase a home before the real estate market had hit rock bottom, the fact that we decided to pursue this crazy idea often seemed, well, crazy. But, we threw caution to the wind, made a number of fiscal leaps of faith, and six months later…Let’s just say that our decision to open a bookstore was driven almost as much by desperation as it was by our love of books.

Stephen: What was it like trying to find loans and investors to support a new, independent book store?

B & P: Awful! Nobody wants to give you money if you don’t have a proven track record, and if you don’t know how to find private investors, well, where do you find them? We were turned down for SBA loans by three different banks. An SBA counselor working out of a local Chamber of Commerce office told us our idea was bound to fail and that nobody would give us money. Luckily, on the very last day Pete’s store was open to the public an angel came into the store and offered an ungodly amount of money to get this thing off the ground. It wasn’t enough, but it was more than we’d hoped for.

Stephen: How did everything finally come together?

B & P: Lots of bickering, some crying, a fair amount of wheeling and dealing. We snagged fixtures for next to nothing from our respective closing stores, we had wonderful counsel pro bono to help us through the lease process, we got in at the end of the liquidations of the last two stores in the South Bay as buyers and were able to buy almost an entire store’s inventory at a fraction of what it would have cost even at wholesale. It was very much like being someone in desperate need of an organ transplant and when your best friend dies…

B & P: The Book Frog is different from the Borders of the last decade or so in that it has heart and soul, and we care deeply about books and about getting books into people’s hands. We know that selling a book is in no way the same as selling a blouse or a can of green beans. When we started with Borders it was a wonderful company. It was a chain with an independent bookseller way of doing things. We learned a sad and serious lesson from the downward spiral of our once dear employer, as we watched the company expand too rapidly and aggressively, adding product that had no business being in a bookstore. How are we different from other independent booksellers? Well, by definition each independent bookstore is different from the other. Each has its own vibe, its own feel. We’re working on ours, but we hope it will be warm and inviting and maybe even kind of exciting.

Stephen: What about Book Frog makes you most proud?

B & P: We did it! We had a vision, we chased that vision, and it’s almost come together.

Stephen: What are your plans for the future? How do you think the business will grow and change?

B & P: We are working on getting our webstore up and running (it will be www.thebookfrog.com when it finally happens, sometime within the next couple of weeks). We are going to be implementing a delivery service. We’re already starting to build our inventory based on our customers’ buying habits. 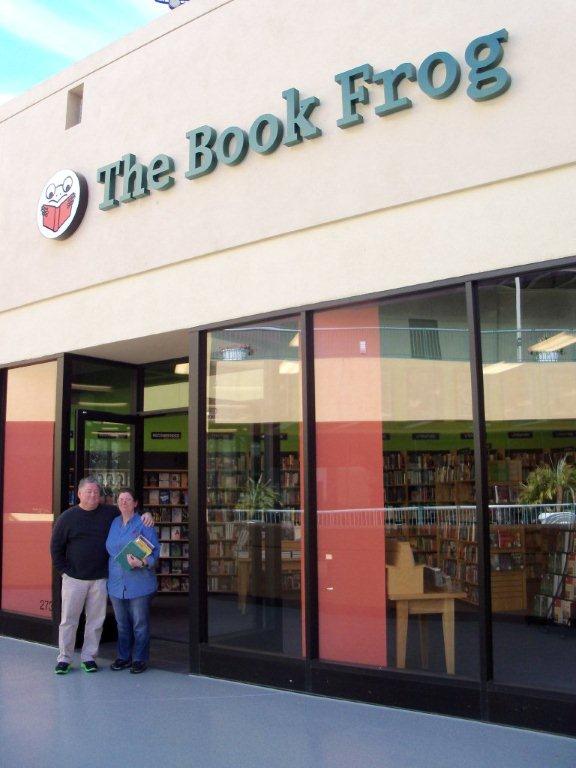 Becky and Pete are good people. They’re book people, and they’re in the business because it’s in their blood. Let’s encourage them, and welcome them, and wish them all the success in the world. And when you’re planning your next book tour in the Los Angeles area, call Becky and Pete so they can set up a signing for you. Let’s make this a trend.

Becky and Pete will be checking in throughout the day, so be sure to say hello!

25 thoughts on “THE BIRTH OF AN INDEPENDENT”