“Those who cannot remember the past are condemned to retake History 11 in summer school.”

-Graffitti on the wall of a Chapel Hll, NC library rest room. 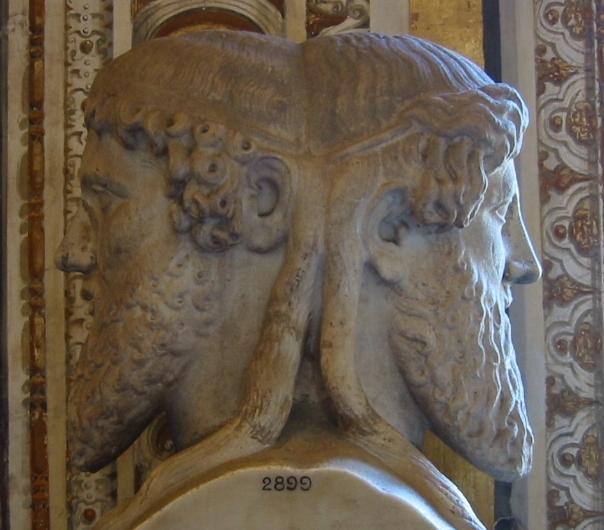 In Roman mythology, Janus is the god of gates, doorways, beginnings and endings. He’s most often depicted as having two faces, one facing forward, the other looking back. His most obvious influence on our culture is in the name of the upcoming month, after the New Year begins at midnight Friday.

Some people recommned that we spend  New Years Eve and Day as a time for reflection on the year just past and resolutions for the year ahead. But let’s face it, those particular days are often pretty hectic, and the ony real resolution a lot of us can make on January 1st is “Well, I’m certainly never going to drink THAT again.” So I generally use the other days in the dead zone between Christmas and New Year’s for that purpose.

Looking back at the year gone by…well, it’s been a hell of a year for us here at Murderati,  in both the good and bad senses for that word. Some of us lost loved ones, some of us had career setbacks. Some of us saw things that looked like they were going to be awesome turn out to be…not so much. But some of us had things happen to us that WERE pretty awesome.

For instance, I saw a book I’d really put a lot of myself into, the book I’d been thinking about doing for a long time and finally got up the nerve to write, get passed on by just about everyone, always with that infuriating “This is a really good book, but…” response. It shook me, I confess. The recession continued to hammer my business hard, just as I’m sure it did many of you.

On the other hand, I saw my son graduate from high school, get into the college he wanted, and overcome his own serious anxieties and fears to the point where he’s thriving, and (if I may be permitted a little bragging) he nailed a 4.0 average.

And…I wrote another book, which as I mentioned a couple of weeks ago, is out on submission. To quote Steve McQueen in the movie Papillon: “I’m still here, you bastards.”

29 thoughts on “The Best of Times, The Worst of Times”